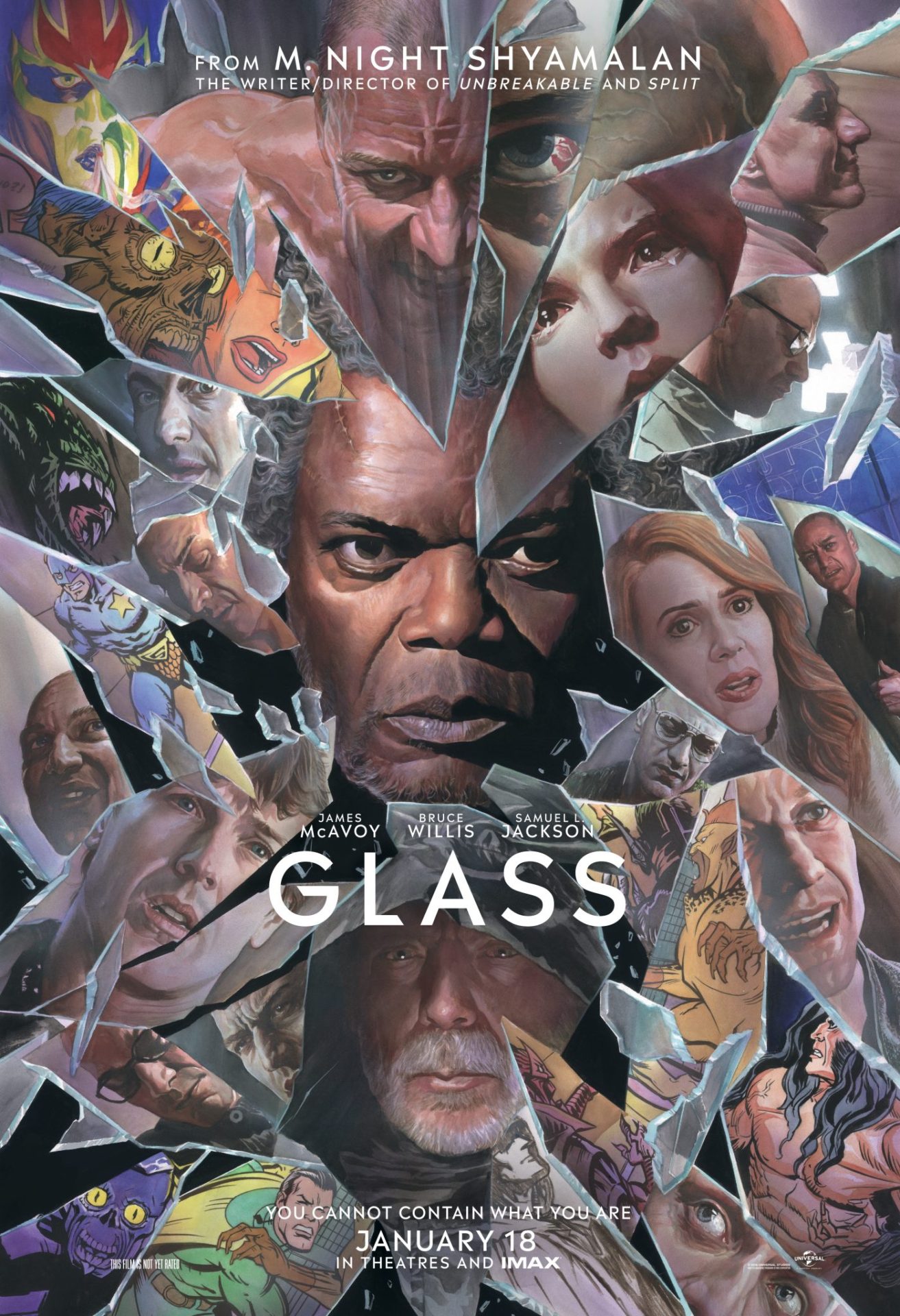 Synopsis: M. Night Shyamalan brings together the narratives of two of his standout originals in one explosive, all-new comic-book thriller: Glass. Following the conclusion of Split, Glass finds Dunn pursuing Crumb’s superhuman figure of The Beast in a series of escalating encounters, while the shadowy presence of Price emerges as an orchestrator who holds secrets critical to both men. (Universal Pictures)

Shyamalan’s grand culmination has finally reached its 2+ hour climax. All of his films have dealt with trauma and how ordinary people attempt to reconcile with the constant, barging memories of their past, but how Shyamalan went about putting these topics in Unbreakable and Split is truly something to be in awe of; these films mix nicely together in a homogeneous fashion but each of them have a different emotional and physical narrative to tell.

It’s almost like a math equation, Shyamalan’s adding the most poignant topics from the two previous films together and presents them here in a reminiscent manner. He does this all while simultaneously creating a film that is not only morally questioning modern-day society but also one that turns that questioning into authority-directed anger and rage, then towards its final and most powerful stage: empathy. Glass follows David Dunn (Willis), Kevin Wendell Crumb (McAvoy), and Elijah Price (Jackson) during their three-day involuntary stay at a psychoanalysis ward.

Shyamalan is directing a fair amount of rage towards formal institutions and the natural human condition as a whole. Humans instinctively hate what they don’t understand, which is the driving force of some narratives, but Shyamalan uses this anger as a thesis that he continues to elaborate on as the running time progresses. Our lead characters are locked inside a controlling, hostile environment that exploits their greatest fears, not because they did anything wrong but because of the “illnesses” that they possess.

Shyamalan isn’t just nihilistically venting to anyone who’ll pay to listen, he’s providing possible cures and ways of understanding towards the heavy stigma revolving around mental health: true, unequivocal love and affection being shown towards victims of trauma as a way of reconciliation. Anya-Taylor Joy revives Casey Cooke, her character from Split, and introduces this topic while attempting to protect Kevin from himself and the personalities that live inside him.

All that Crumb and Price, have ever known is pain. One is a victim of child abuse, the other having aberrantly brittle bones. This trilogy began with unspeakable amounts of pain plaguing innocent people until they couldn’t take it anymore, disregarding all sense of the worth of human life to achieve their individual goals, sound familiar? The pathway the narrative follows is almost reminiscent of your average Marvel/DCEU film at times but this isn’t without reason.

Shyamalan wants you to become warped into this fictional world as much as humanly possible, to the point where he’s toying with your expectations and leading you to believe there will be a certain climax because of that certain third act structure being constantly copied and pasted throughout mainstream cinema. Instead of a physical spectacle, it’s an aggressive storm of emotion. There’s no final boss fight with a giant blue beam being shot into the sky. Instead, it’s a finale that’s filled to the brim with emotionally draining amounts of empathy towards the physically and mentally tortured, a very necessary gesture that the whole world must know in this day and age: we don’t need violence, dread, fear, grief, all of that is futile when you can be accompanied by another human being’s mental and physical love.

Cinematographer Mike Gioulakis’ imagery and framing here is almost too precise for words here, accessing a new level of involvement and voyeurism to the experience of being an audience member for one of these films. One scene in particular still sticks out after multiple viewings. The scene where Kevin’s different personalities emerge as Hedwig attempts to flee their room. The camera stays still, while McAvoy shifts around the room, at times going almost entirely out of frame for very brief moments. This does not only provide an alarming sense of tension when it looks like he’s about to flee the frame but it also accurately represents what any unsuspecting person would do in that situation, stand still and observe in absolute shock.

Not only is Gioulakis continuing to elaborate on his visuals from working on Split and how he can crank a scene’s tension to 11 via seemingly intricate framing, it’s also just gorgeous in its own right. The whole film is as colorful and visually fleshed out as it is delicate towards the topics it’s exploring. Every single frame provides more than its fair share of horror and understanding of the environments it’s observing, and how the human eye would naturally observe the on-screen occurrence if a bystander were to catch a glimpse of these events (once again, thank god for Mike Gioulakis).

“You were spectacular”. It’s almost upsetting how much of a final film this feels like for Shyamalan but if this is to be the final chapter of his engrossing saga of trauma and its physical manifestations, then what a close. Although there are characters plucked from Unbreakable and Split, it doesn’t rely on fan service to establish/execute what it sets out to. Shyamalan has been preparing for this film for almost twenty years and it truly shows. Everything is wrapped up in the neatest little bow, even Shyamalan’s cameos connect in a satisfactory manner.

If this is, in fact, the man’s last motion picture project, let it be known that he did it. Over his 27 years of creating narratives that enticed, shocked and connected with audiences around the world, he’s finally created his magnum opus, something that feels like a mountain climbers victorious howl at the peak of Mount Everest. It has all come together here, and it has all paid off tremendously. At our cores, we are all the same. We are all human beings, some of us just happened to be plagued with abilities or illnesses we never wanted or asked for but the road only looks bright from here on out. We can control our lives from here on out and find comfort within unapologetic compassion and love, to attempt to reconcile with mutual trauma.

In a world where humanity seems so dead set on violence and hatred, Shyamalan offers us a look into what could possibly be, what could live and thrive if we let it grow. “I’m gonna stay in the light, till the end”. Thank you Shyamalan, from the bottom of my heart. Thank you so much.

Ranking the Films in the DC Extended Universe