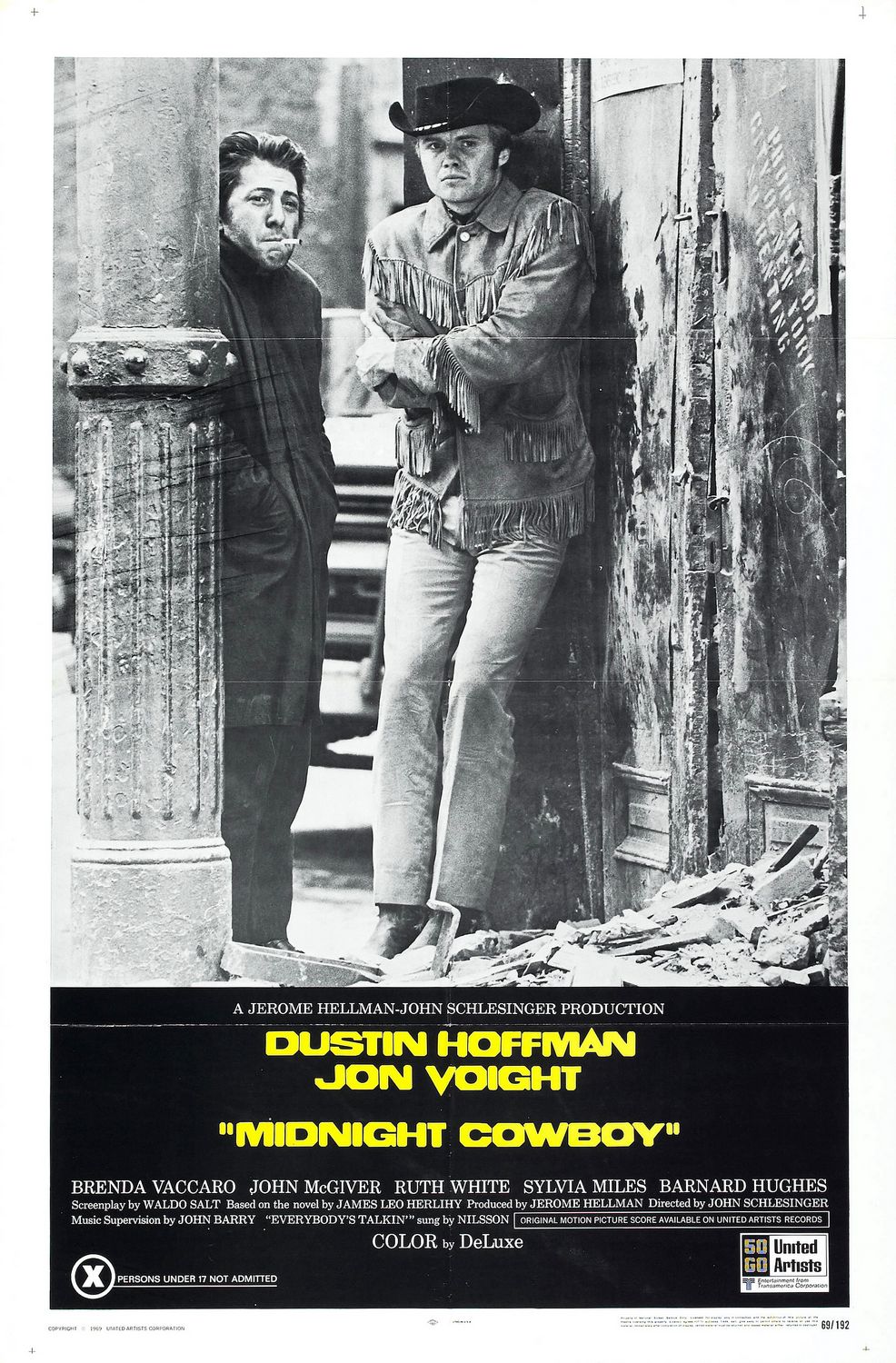 Synopsis: A naïve hustler travels from Texas to New York to seek personal fortune, finding a new friend in the process (IMDB)

Joe Buck (Voight) moves to New York City aiming to make it big. But he doesn’t want to be an artist or an entrepreneur; what he really wants is to become a gigolo. He believes his Texas rugged cowboy looks is what the city ladies are longing for, which will eventually turn him into one of the best hustlers in town and making tons of money in the process. Needless to say, things don’t turn out as he wanted to. He meets Ratso Rizzo (Hoffman), an outcast he instantly connects with. The two form an unlikely bond that will show itself very needed for these two very lost people.

Midnight Cowboy was a shock when it was released: Buck wanted to be a male prostitute, which that alone might already be off enough for the time, but during the course of the film he becomes a prostitute for other men, elevating the shock to unprecedented heights. New York City was show as a decadent town, very depressing to live at; Rizzo had tuberculosis, most of the characters had their own agenda and the two protagonists end up one step from being homeless.

It’s not a feel good movie, not by a long shot. And that is one of the most attractive aspects of this one. Midnight Cowboy came around when the focus of film creation was shifting from the studios to the directors, giving them an unheard freedom to tackle any subject and take all the risks they intended to. That liberty revolutionized the North American industry and gave us almost 15 years of remarkable gems, from the late 60’s to the early 80’s.

In Midnight Cowboy, one of the main reasons you go on in the ride is because of Joe; he is a hustler, yes, but he is also the most naïve character in the picture. It’s like a crazy twisted version of Dorothy going to the world of Oz. Joe is pure hearted, innocent, he doesn’t plan ahead that far. He believes he only need to get to New York and he’ll be a success. He is very quickly swallowed by the nastiness of the city, being played with, used and tossed aside.

The same think happens to Rizzo, and their contrast is very interesting to see. Buck is this golden small town boy and Rizzo is street smart and savvy, but in the end, it doesn’t matter if you are innocent or if you know your way around; they are both not prepared to handle what is being given to them. The ways of the big city are eating them alive. Loneliness destroys it all.

In an interesting approach, it is almost like a precursor of those types of films where the metropolis person can’t handle the weight on his/her shoulder and has to flee to some sort of paradise. It’s like Diane Keaton’s Baby Boom of the 60’s.

But the strengths of the film don’t hide its problems. It has aged very badly in some areas. There late 60’s had a lot of visual mannerisms that are quite laughable today, and there are plenty here. The dreams sequences are boring and the entire Warhol party is just ridiculous now.

These are minor mistakes. Most of the work of director John Schesinger is really good, especially by making us feel a part of the city, like we are walking down the streets with the two leads. But mostly, the biggest strength of this film is, undoubtedly, the performances of Dustin Hoffman and Jon Voight. Hoffman was fresh off The Graduate and fighting very hard to run away from the Movie Star status the industry was trying to fix on him. That drive gave us a lot of great performances in the next years; Jon Voight was a breakout and delivers the high and fast learning of Joe Buck without ever losing who Joe was at the start.

Midnight Cowboy is, overall, still a very engaging film. Check it out!