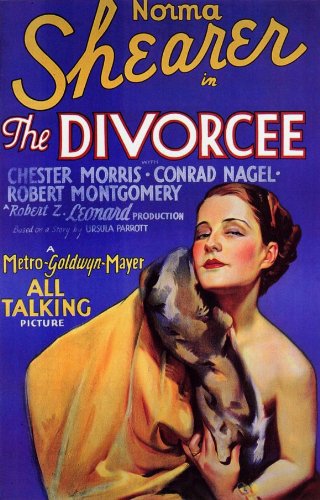 The Divorcee is an entertaining drama with a strong performance by Norma Shearer.

The Divorcee was about a couple named Jerry (Shearer) and Ted (Morris) who decided to get married after a weekend of partying with their friends. They are completely in love with each other and promise to treat both sides of the relationship as equals. Paul (Nagel) is also in love with Jerry and doesn’t take the news very well; he drinks more than he should, and while driving with a couple of friends in the car, suffers an accident, disfiguring Dorothy (Judith Wood). Paul feels so ashamed of what he did he marries Dorothy, at the same time Jerry and Ted are consuming their own.

Jerry and Ted live happily for three years. On the day of their three-year anniversary, a group of friends come by their house to celebrate bringing Janice (Mary Doran) along. Jerry catches Ted and Janice having an intimate moment and quickly understands they had an affair. When confronting Ted, he tells her the affair was something of no importance, not carrying that much about her feelings. Jerry then decides to equal things out, sleeping with Don (Montgomery), Ted’s best friend. When Jerry informs Ted about what happened, he, so fast in telling her to forget about his infidelity, couldn’t accept her escapade. They soon separate and Jerry starts having fun on her own.

Early 30’s was a transformative time for cinema; not only was the industry still adapting to the advent of sound, which transformed completely the way movies were done, but it was also the period identified as the “Pre-Code” period, when movies had more freedom to deal with subjects as infidelity, sex, vices and other complex themes that became very restricted once the Hayes Code started. It still is Hollywood, of course (married couples were already sleeping in separate beds in the movies after all), but it is a breath of fresh air to see some of the movies trying to start important conversations.

The Divorcee was one of the most famous movies of the pre-Code period, and one constantly pointed as an example of how the industry had to walk backwards after censorship started. The story is very simple, but it presents some layers into the subjects of marriage and sex equality.

Jerry and Ted promise to treat each other like equals, but Ted very quickly shows his double standards when Jerry behaves exactly like he did. Jerry knows she is liberated, but in the end she doesn’t find that much pleasure in her liberty. Of course, this notion that Jerry can’t be truly happy being single is sexist, but for the 30’s, it still brought some fresh perspectives and, most importantly, set a space for conversation.

Jerry misses Ted and wants the marriage to work out, but she won’t annul herself and her pain because of that; she was cheated by her husband and he doesn’t show any true remorse, and she won’t comply with that. She dives into her newfound singleness without regret and without fear. That was quite groundbreaking for the period. The cast responds to the material with ease, forming together a satisfactory ensemble. Some things are ridiculous (like Dorothy covering her face) but they mostly work fine.

The standout, of course, is the Academy Award winning performance by Shearer. She was one of the biggest box office attractions at the time, and Jerry was a completely different character from the rest of what she was doing in the period. She delved into the role, and her work is pretty strong. She hits all the right marks and she portrays the melancholic notes of Jerry really well. It’s touching and sad at the same time. It’s not a groundbreaking performance, or something that wows us, but it was worth the award and very charismatic. Anyways, almost no performance at that time was really formidable.

The Divorcee may not the best picture of that year, not by far. However, it is a good film, and highly recommended for those who want to learn a bit more about Norma Shearer.