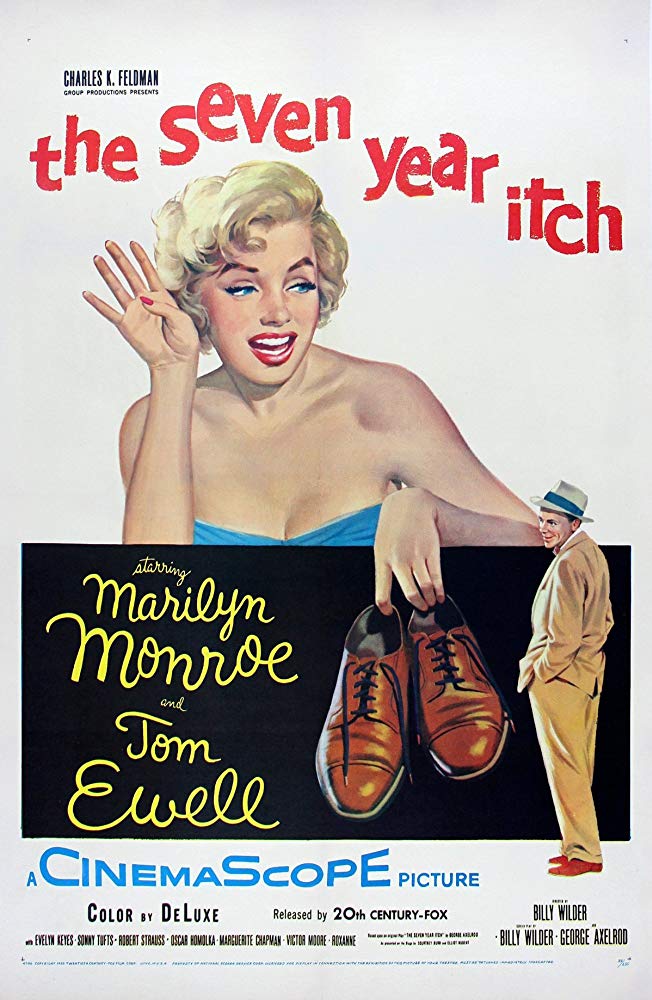 The Seven Year Itch is a dated comedy with a stellar performance by the legendary Marilyn Monroe.

It’s summertime in New York. And vacation time. This means wives and children are packing their bags to get away from the hot city, going to the countryside or to the beach for a few weeks. The husbands can’t go with them; they have to work and earn their living, after all. That also means that they are staying unsupervised in the city, where they can have as much fun as they want to, which includes cheating on their wives as much as they can.

Richard (Ewell) is not like that. He prides himself on always being faithful to his wife Helen (Keys). But when a the new, stunning neighbor (Monroe) moves into the building, he finds it harder and harder to keep up to his promise.

The Seven Year Itch was the first movie Billy Wilder did after his relationship with Paramount had gone sour over creative differences. He arrived at 20thCentury Fox bringing a track record of a brilliant career of highly praised films such as Double Indemnity, The Lost Weekend, Sunset Boulevard and Sabrina. But Fox didn’t give him too much creative control over this project. He had to work with an already established cast and do as he was told.

On the other hand, Marilyn Monroe was getting tired of playing the ditzy character over and over again and was eager to prove to the world she was capable of much more, something she eventually succeed in with Bus Stop, The Misfits and especially her second pairing with Wilder, Some Like it Hot. So it’s not a surprise to see her accepting to do this project, since it would give her the chance to work with a director of such caliber, who was known for his sharp scripts and for getting his actors a lot of praise (and a lot of awards too).

Unfortunately, The Seven Year Itch doesn’t hold up to its status. It has some very creative visual elements that help bring fun and lightness to the material (like the way Richard envisions his “encounters” with women who he says are attracted to him) and there are some very cynical and delicious remarks on marriage and “machismo” – the husbands checking out the lady right after the train is gone is great – but in the end, there’s not much to hold the movie together.

The first 20 minutes or so of the film are basically Richard talking to himself out loud. It then takes 5 minutes for it to become very boring and 10 minutes for it to be kind of infuriating, and we still have 10 more minutes of it to go. At the end of the day, it’s unacceptable for a movie, especially a comedy, to have 20 minutes of basic monologue. It just looks pretty lazy, even if it has some inventive moments in between.

Even the most iconic moment of the film, the skirt thing on the subway vent, is uninspired. You pretty much just see it happening from the knee down and them it cuts to her face. It is totally understandable why it became iconic, especially because it was filmed in location in New York and people went wild with what was happening in front of their eyes. It was marketed months before the release as an unforgettable moment, but the word of mouth made it sounds a lot more than what it actually is. Which is pretty much nothing,

The film only gains some life when Marilyn shows up. And that’s how it goes from there til the end. Whenever she is on screen, she commands our attention and the film becomes somewhat interesting. When she’s off, so are us.

Monroe had a magnetism that is very hard to explain. When you watch her on screen, it’s like she is moving in her own particular speed, which is not the normal speed the rest of us, and her costars, are going by. So we automatically fix our eyes on her, because we want to understand how’s that going on. She just moves differently. It’s such a extraordinary part of her own persona we tend to forget she’s also acting while doing so, and giving a brilliant performance for that matter. Her comedic timing was spot on here, and she is well supported by Tom Ewell, very entertaining as Richard. But in the end, there’s not a lot going on here to be fully appreciated.

The Seven Year Itch, unfortunately, doesn’t hold up to its hype.

Inside Out 2019: We Are the Radical Monarchs Review