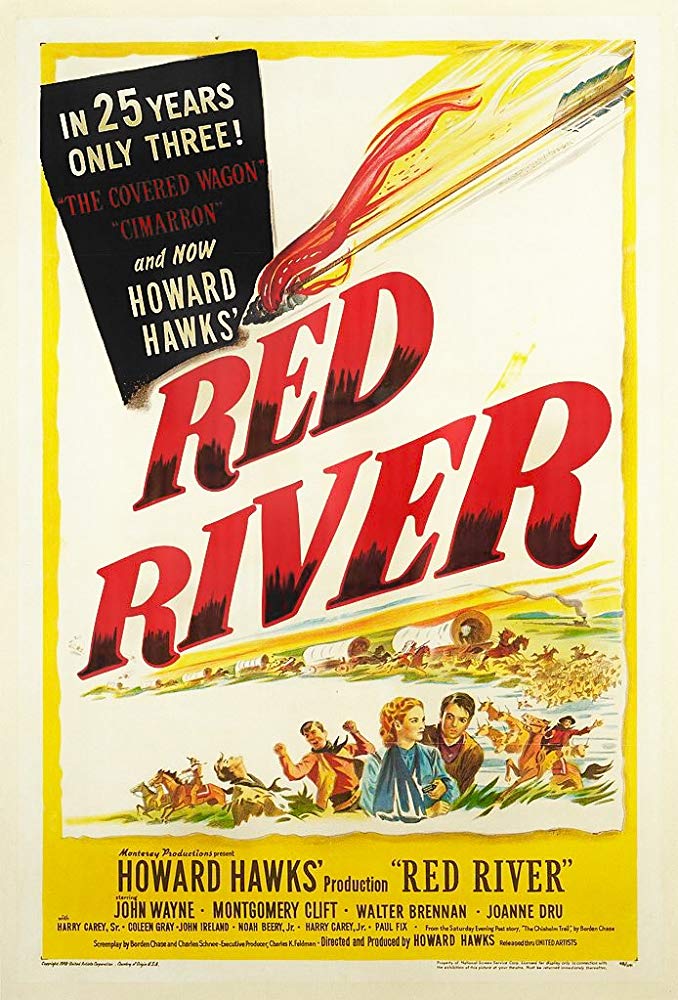 Red River is about a man named Thomas Dunson (Wayne) who was quite difficult to deal with. Unflinching, he sets his own rules and lives by them. Being completely fair isn’t one of them, as he even attempts to steal cattle from a familiar farmer when part of the herd stray into his own. He wants to have his cattle ranch in Texas built from scratch and be the biggest rancher in the state. He sets his goals having by his side his right hand man Groot (Walter Brennan) and his son Matt, whom he adopted after his parents were killed in an Indian attack.

After fourteen years of investment, Dunson now owns 10,000 heads of cattle and he is ready to lead them to Missouri and sell them at the nearest market. For him, this is almost a ceremonial event, if he believed in such things: it’s the culmination of his investment, of his determination, it’s a statement of his will power and his strength – and if anyone thinks of crossing his path in his glory walk, well… think again.

During the trip, his tyrannical behavior increases, becoming continuously more difficult to address; Dunson is not accustomed to listening to anyone’s opinions and suggestions, and his stubbornness puts him in a collision path with Matt (Clift), now a grown man who came back home after fighting at the Civil War with his own ideas and experiences on how to deal with the task. Matt sees things in a more objective way; he’s willing to listen to advice, to improvise and to change the plan if a better solution comes by. Finally a part of his crew turns against him, headed by Matt, and Dunson vows to kill the boy.

Hawks was a visionary director who never really got his much deserved praise at the time. He had a very prolific career since the 20’s, spanning through all genres. If you put some of his work together, it’s hard to pinpoint a pattern: Gentlemen Prefer Blondes, The Big Sleep, Bringing Up Baby, Rio Bravo, Sergeant York, His Girl Friday, Only Angels Have Wings, The Big Sky and so many others… he did screwball comedies, westerns, dramas, adventures and he excelled in all of them. Red River was one of his masterpieces, and it is very clear why just after a few minutes have gone by.

Dunson is a larger than life character. His stubbornness, his unwillingness to recognize effort, his ease with leaving behind the woman he loves for his dream… it’s such a strong creation, you don’t sympathize with him almost immediately, you just can’t. But them you have John Wayne playing him, and his charisma pulls you in. Red River was the first time Wayne really showed more than just his stature onscreen, and it paid off as it’s one of the best performances of his career.

But the real reason Red River works so well is because of the other casting decision Hawks made: he chose Clift to play the son. Clift was the antithesis of what Wayne represented; while the veteran was strong, imposing and commanding, Clift was suave, understated, introspected. Clift never had problems showing his character’s fragility onscreen, including his own. In a way, his subtlety was everything Westerns weren’t. You look at him and the first thought that comes to mind is: Matt doesn’t belong in the west, he will never be able to survive there. Then Clift did his thing, and very fast you understand that, not only is he more than equipped to survive the west, but the west needs him desperately.

Clift was an outstanding actor, and his understanding of the character and the complexity of his relation with his adopted father give Red River its blood and soul. He was such a gifted actor he elevated Wayne’s performance; Wayne is good, but Clift gives meaning to every interaction. And sometime all he needed to do was silently react to whatever it was that Wayne was doing. Amazing.

The battle between the two actors is the focal point of Red River; every interaction between them is electric, and we crave for them to reunite when they are separate. It’s a great balance because you feel the absence of the other actor in every scene they are not a part of, which means the script, the actors and the director did a hell of a job in creating this magnetic relationship.

But Red River was much more than just two unbelievable performances: balancing the epitome of tradition that was John Wayne with the revolutionary new way of acting that Clift represented (who brought Method to Hollywood, setting the path to Marlon Brando and James Dean) helped the film become something else; it modernized the genre, unsettling what was already set in stone with Westerns.

There’s emotional complexity to what usually was just “good guys” vs. “bad guys”, with good guys being cowboys and bad guys being Indians most of the times. There are no bad guys in sight in Red River: these are layered individuals, and even when we don’t necessarily agree with some of their choices, they never turn into a caricature villain. It’s almost palpable; we feel the electricity in the air in every scene.

Hawks was a craftsman in every single detail, and Red River is a beautiful western to look at: the cinematography, the aesthetics of the shots, the soundtrack… everything works in making this a true masterpiece. It was then and it still is, more than 70 years after its release.