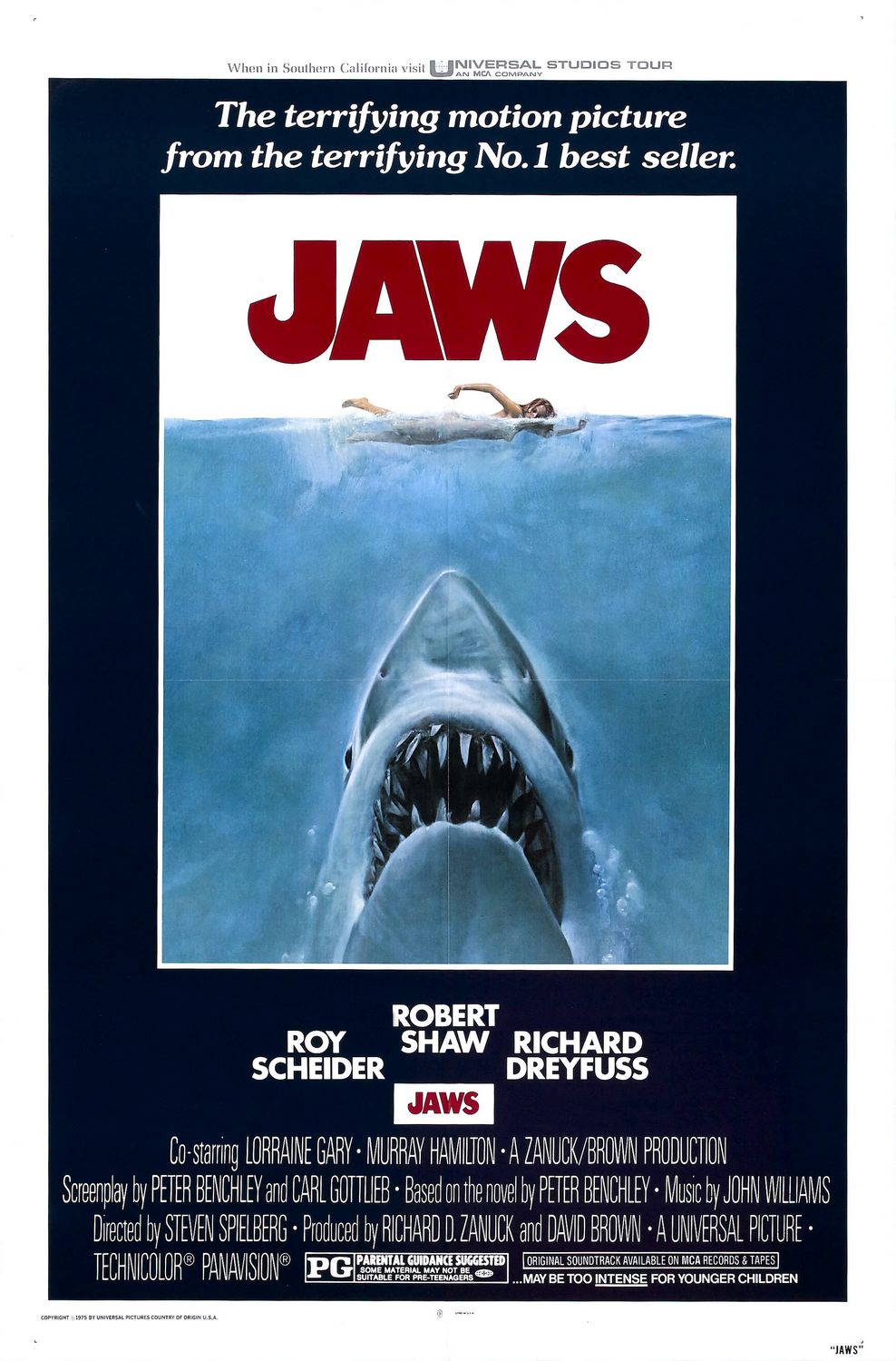 Jaws is a delicious adventure horror film, the perfect summer movie and Spielberg’s first masterpiece. Get the popcorn and enjoy it.

Everyone knows this story: during the long weekend of the 4thof July, a humongous white shark attacks a small seaside community, bringing terror to people on the beaches, but even a bigger terror to local authorities, who can’t stand to the idea of losing hundreds of thousands of dollars if the beaches close. They hire a shark hunter (Shaw) to chase the beast down with the help of a young shark specialist (Dreyfuss) and a reluctant sheriff (Scheider) who is terrified of the sea. The three men set on the quest to kill the hungry shark.

Jaws was Spielberg’s first blockbuster, a scenario he would get very accustomed with in the near future. And when you watch it, you totally understand why: it’s such a perfect film. It’s so good it made an impact in real life and people vanished from beaches all over the US when it first hit theaters. People were so involved in its narrative they started panicking to go anywhere near the water, and summer tourism that year hit a low point because of it. It’s similar to the impact “The Exorcist” had in people in 1973; people were getting sick inside the theaters.

Jaws still holds up incredibly well today, which is a little bit surprising when you know this wasn’t a high profile film with the biggest budget available for the special effects. Bruce, the fake shark, was a nightmare to work with; it was constantly breaking down and not performing the way it should during takes. And in a closer look, it wasn’t really that realistic. But those adversities came to be very beneficial to the film; Spielberg needed to hide the shark in order to conceal its problems, and in doing so, he created this amazingly tense narrative, making us always wonder what was lurking underwater.

Spielberg was always an inventive director with complete control of the narrative. That can be very easily confirmed with just watching his first films, the amazing “The Sugarland Express” and the terrifying “Duel”, with bears some resemblances with “Jaws”, as it is also about a man being chased by an indestructible beast. His mastery of the craft gives us unforgettable moments, starting from the very first sequence, when the unnamed woman goes swimming at night and is eaten alive but something we cannot see. That sequence alone puts us right on the edge of our seats and Spielberg has us in his hands from that moment on. And he doesn’t disappoint after.

It is refreshing to see that the 1975 Spielberg wasn’t afraid of having a child be killed by a shark, since his artistic preferences transitioned to a more (unreal) optimistic approach as the years went by. His willingness to take that path here makes the danger feel more real, fore unpredictable. We never know what is going to happen with the characters, as everyone is in danger. Topping his choices as a director is the perfect soundtrack by John Williams, which creates so much tension the hairs on our neck are constantly up.

Although it is a summer entertainment, “Jaws” also has a perfectly clear message about greed and the lack of value for human lives from the people in power positions. The heads of the town don’t care if some people die from a shark attack; it’s better than closing the beaches and loosing all that money. There’s not a lot of subtlety here: the bad guys are bad and greedy and the good guys are stoic and combative. It’s very simple but it’s also effective.

The three protagonists perfectly embody their characters, and they all compliment each other in a great way; Quint is the Ahab of the story, the perfect hunter who is chasing an even more skilled hunter. This is an honor task, and he goes all the way to fulfill it; Hooper is the more balanced character of the three. He knows sharks and understands it for the killing machine that it is, but he is also pretty intrigued and curious about this particular creature; and Brody represents the everyman, who is terrified of the creature but rises up to the occasion to save the day.