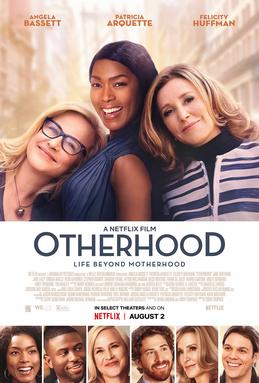 The quality of acquisitions made by Netflix which the streaming service now brands as their own films have improved thanks to its increasing reputation as a home for great-quality programming and its huge subscriber base. But as with any studio or distributor taking a punt on a film, not every one is going to be a hit. Otherhood is unfortunately a miss.

Otherhood is a film aimed at an audience Netflix hasn’t addressed much before with its other films. Of course, this isn’t going to appeal to the same crowd as Annihilation or Bright, but a light and breezy 100-minute comedy about three friends wanting to reconnect with their grown-up sons is going to have a fairly broad appeal, right? Only if its any good.

Otherhood features three actors with long, well-respected careers in Bassett, Arquette and Huffman as Carol, Gillian and Helen respectively. But its main failing is that it doesn’t use them in any real capacity. The premise goes no deeper than what is shown in the trailer; the three are miffed their sons forget Mother’s Day, so they decide to drive into New York City to see them. It’s unclear what exactly they’re hoping to achieve by doing this but you have to assume it’s to mend a relationship that’s broken. Although that term needs to be used in the absolute loosest sense of the word.

To give credit where it’s due, Otherhood does present something not always explored in big-screen outings. Stories of motherhood are often reserved for those with children under the age of ten before skipping to the other extreme where a film mom is someone whose only goal is to be loud and obnoxious when their fully-grown kids come home for a big holiday celebration.

Otherhood explores the other side of when a child moves away and is now feeling disconnected from the person that used to live in their house. However, instead of embracing their position and learning who they are without their kids in their house, the trio pine over what once was. In fact none of them seem to particularly like their sons which negates the entire premise of the film.

Nevertheless, Otherhood tries to establish this storyline in something that’s sweet and feels funny and cute, but it just doesn’t achieve that. The film is just so predictable and unimaginative that, it feels like its coaxing you into taking on the challenge of seeing it through to the end. There are definitely moments that might elicit something of a laugh but they’re born of circumstance and so tightly packed with a constant back and forth between snark and unnecessary sentimentality that they don’t really land.

While the main crux of Otherhood comes down to three mothers who feel like their sons need to pay them more attention, it’s not really established why this is the case other than not getting a call on Mother’s day. And without wanting to excuse their sons, the scene where the three main characters decide to take the ‘long drive’ to NYC chronologically has to take place before midday so they’ve not really given them the chance to actually forget. The result of its unsubstantiated premise means that it’s very difficult to connect with any of the film’s characters or feel any kind of sympathy for them. In fact, for everything their sons do throughout the film which is supposed to set them up as the villains, the mothers are just as unlikable, if not more.

It’s unfortunate because Otherhood clearly has all the best intentions but just doesn’t deliver on them. With that in mind, this might be a film that’s destined to hang around, half-finished in the ‘continue watching’ section of many viewers’ apps until it gets pushed so far down the list that we all forget it ever existed.