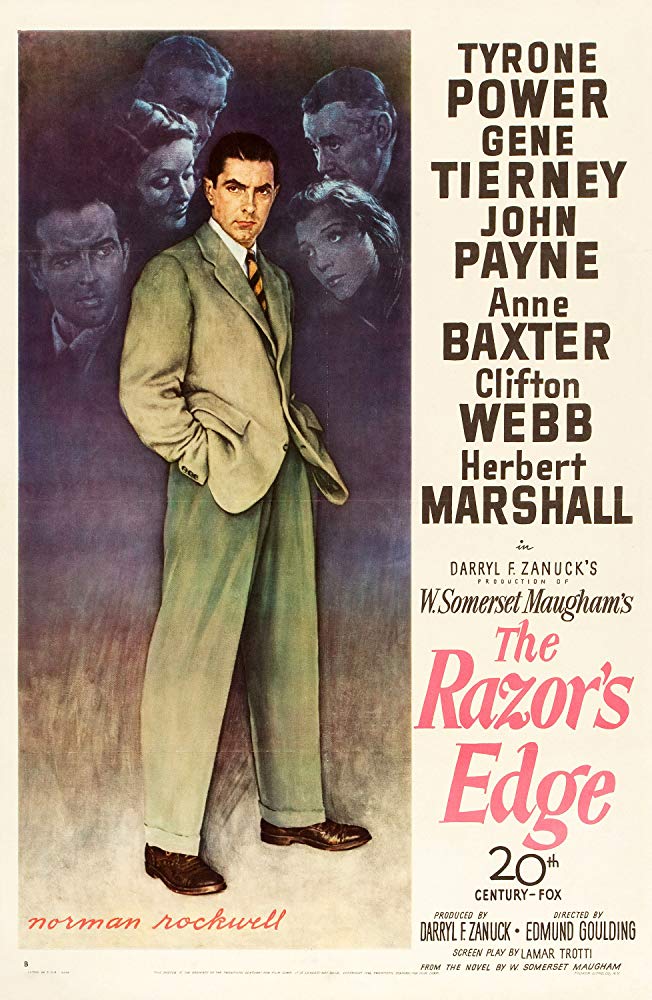 The Razor's Edge is a somewhat dull dive into human existence that may not hold up as well today but it still a interesting way to understand the time period.

The Razor’s Edge saw Larry (Power) come back home from World War I a changed man. After being saved by a fellow soldier who gave his life so he could life, Larry is looking for the meaning of life – especially his own. He wants to understand his place on earth, and what is the purpose of his existence. That doesn’t exactly bode well with his fiancée Isabel (Tierney) a socialite who only cares about parties and wants Larry to find a good job and accept the place in society he was meant to have with her on his side.

Larry can’t have that, not anymore. So he takes some time off to find himself, and he ends up in India, learning from a guru to find his peace of mind and be able to use his abilities to help those around him. Isabel can’t wait forever and she decides to marry well, with Gray (Payne), a man who has everything going for him, at least until 1929’s Wall Street crash, which leaves them broke and Gray in seriously mentally unstable.

Larry finally returns from his Indian retreat, and he meets Isabel and Gray living in Paris with Isabel’s rich uncle Elliott (Clifton Webb) who took them under his wing. Larry also reunites with Sophie (Anne Baxter), his and Isabel’s childhood friend who lost herself to drugs and alcohol after her husband and baby died in a car crash. Larry decides to help Sophie by marrying her, but Isabel, still madly in love with him, can’t accept that and she decides to intervene.

The Razor’s Edge is based on the popular novel by Sommerset Maughan, and in 1946 it was the prestige picture of the year. It’s funny going back to these sorts of films to see if such esteemed still maintain their status. It’s not the case here. Darryl F. Zanuck was the king of the socially relevant films of the decade (Gentlemen’s Agreement, The Snake Pit, Pinky) but the films of the era were either hit or miss on the themes they were addressing, mostly because at the time there was not real freedom to address these themes straight on and because the style of narrative was still constricted in lots of ways.

The Razor’s Edge suffers from that problem. The film tries unraveling the deep conflicts of the soul but it is in a lot of ways soulless. Adding to that, it is pompous and screams prestige in every frame but talks about living an honest life and finding meaning in simplicity – the exact opposite of what the staging is showing us, of what the entire production is trying to accomplish.

That bipolarity hurts the film deeply, especially because the lead actor, Power, was not the most versatile of actors. His deliveries, trying to look earnest and conflicted most of the times end up looking blank and wooden. Part of the cast seems lifeless, like Payne and Herbert Marshall as W. Somerset Maugham, and that don’t help saving the film.

Some actors though get meatier roles in The Razor’s Edge and they do deliver the goods. Tierney was one of the great beauties of the decade, and although she does falter in her creation from time to time, she does manage to give us a good performance with her Isabel, who starts as a shallow girl but gains more complexity over time without abandoning her true nature; Clifton Webb as Elliott Templeton almost reprises his memorable role in Laura here, and he was a master in creating distant arrogant men.

Ultimately, it is Anne Baxter who truly shines here, with a fantastic performance and a great character’s arc. She does overact in a couple of scenes and we can recognize pretty easily the acting tics from the period (which didn’t age that well) but even with that, she is still very strong, and most importantly, very moving. She had the meatiest character in the film and she delved into Sophie’s tragedy with everything she had, which is very exciting to watch. She totally deserved the Oscar she received for it.

The Razor’s Edge doesn’t have the same strength and stature it had when it first came out, but it is still an interesting film to watch, especially to understand the period in which it came out.