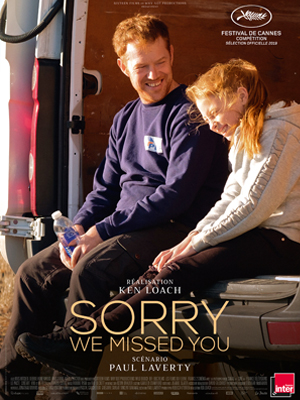 Sorry We Missed You is something of a mixed bag that was well crafted with well played characters. But, the heaviness of the subject matter gets to be so overwhelming as to make the viewer feel as though he or she is drowning in a depressing morass of working class pain.

Ricky (Hitchen) has been a construction laborer for years, but is now seeking employment elsewhere. He finds a job as a delivery driver, but, rather than a traditional salary, he is paid fees based on how much he delivers. At the same time, is wife Abbie (Honeywood) works as home carer and nurse who is paid based on how many elderly patients she sees each day. When their job situations become extremely difficult, the couple’s home lives, as well as those of their children begin to break down.

The performances in Sorry We Missed You are solid all around. Hitchen imbues Ricky with a great deal of pathos, while also maintaining a hard edge and temper. Honeywood’s portrayal of Abbie provides a brilliant foil to Hitchen’s Ricky. While she could have easily just been played as the kind and long-suffering wife, Honeywood is able to match and surpass her on-screen counterpart. They are an effective double act that grabs the audience’s sympathies from the outset. Points must also be given to Ross Brewster as Ricky’s boss Maloney. At first, he seems to be a firm but fair leader, but time shows where his real priorities are.

Unfortunately, while the characters in Sorry We Missed You are sympathetic, the story of their struggles just becomes so overbearing that it breaks down into an almost fetishistic depiction of working class misery. The look at how zero-hour contracts and the new gig economy is timely and important. But, when one bad thing after another happens to Ricky, Abbie, and their kids, Seb (Rhys Stone) and Lisa Jane (Katie Proctor), it all becomes too much to accept. The audience still feels bad for the family. However, at the end of the film, viewers are still left hoping for something good to happen to them, simply to provide some kind of small break from the suffering.

If you’re the sort who can handle so much misery in your films or you can use the suffering as a fuel for righteous fervor, Sorry We Missed You is still worth the watch.

This Is Us Season (4×05) Storybook Love Review