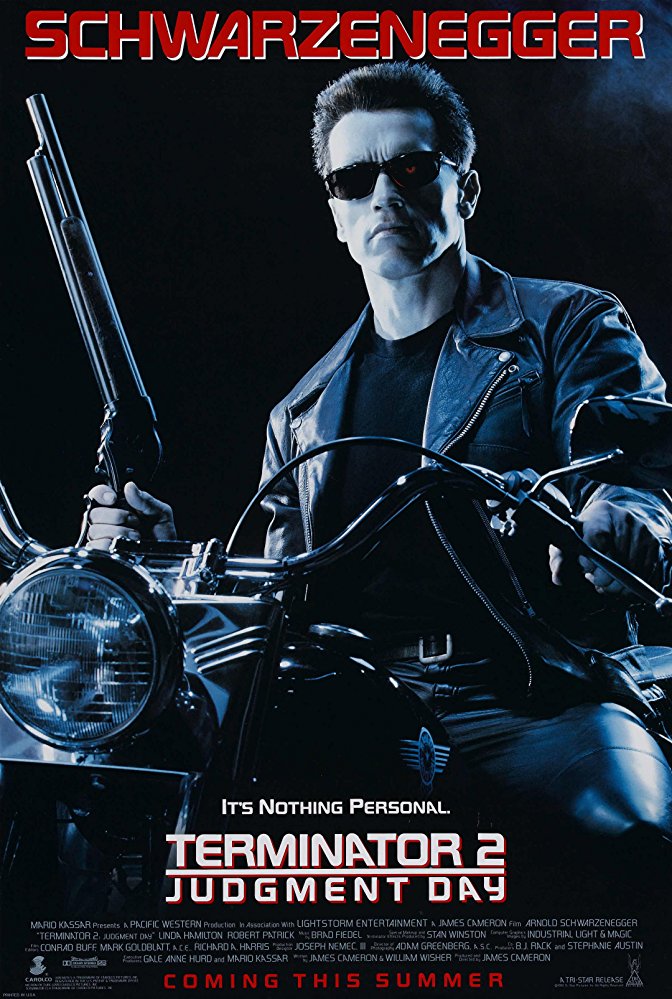 Terminator 2: Judgement Day, already the greatest action picture of the 90’s still holds it up after all this time.

Terminator 2: Judgement Day follows John Connor (Furlong), a youth who has had a very troubled life. Living with foster parents whom he totally despises, he’s a rebel with a cause: he was raised to believe the world was coming to an end and trained to survive no matter what by his mother, Sarah Connor (Hamilton), just to see her being committed into a mental institution for her delusional behavior and her radical actions to end the end of the world. John ended up believing his mother was crazy and became an angry kid.

Well, that’s about to chance when a T-800 (Schwarzenegger) comes back into their lives. This time remodeled by a future John Connor to protect his younger self, the T-800 comes back from the future to save John from a more advanced terminator model, the T-1000 (Robert Patrick), made of liquid metal, meaning he can take pretty much any shape or form he wants. T-800 and John help Sarah escape the ward she’s been held at and they flee, trying to escape the T-1000 while figuring out what has to be done to try and stop the apocalypse.

Few movies are quite groundbreaking as Terminator 2: Judgement Day since it was first released. Being young at the time meant not catching it in theaters, but one can only imagine how the visual effects must have caught people off guard. Those same feelings would manifest two years after having seen Jurassic Park. It was easy to be caught off-guard by the power of those images, by the magnitude of what has been done while staring at the screen with an open mouth and probably drooling in awe. That’s how most people surely were while experiencing the film in theaters back in 1991.

Some of the visuals within Terminator 2: Judgement Day have aged a bit (I mean, even LOTR visuals have already aged) but they are still pretty great overall. What stayed completely immaculate though, is the power of James Cameron’s narrative. He’s a master of telling stories and he was at the top of his game here. The action sequences are quite extraordinary, and probably the best one comes right in the beginning: the truck chase sequence at the LA water canals is breathtaking, especially because it looks like it doesn’t have any special effects at all. It’s quite exciting to watch.

The story of Terminator 2: Judgement Day starts establishing its players pretty effortlessly. The two Terminators, yes, but especially John and Sarah. We know exactly who they are and how they came up to be that way in just a few moments, in a way that we feel like we’ve known their journey all along while also wanting to discover more. James Cameron makes it quite easy for us to care for these two characters, the troubled John and the caged Sarah. From the start we want them to be together. James Cameron is not the most subtle of directors but he’s no Michael Bay; he knows how to imbue the story with the right amount of details to make us connect. We cheer for these two because we know Sarah is telling the truth, so everything that happened to her and to John is, in a way, quite unfair.

When the three main characters hit the road, they become a family, giving us one of the most interesting reflections of the film, in Sarah’s voice over about the Terminator being a father figure who would never turn his back at John, never give him a bad word, a foul temper or result to violence. In a world filled with empty words and actions, a cyborg is the ultimate reliable person. Who would have guessed a cyborg action picture such as Terminator 2: Judgement Day could be so existentialist?

The T-800’s arc is the most different aspect of the story of Terminator 2: Judgement Day; with some technological thingy (I’m not really good at this scientific stuff) inside himself that enables him to learn from humans, he is constantly assimilating from John, and his relationship with the kid is quite endearing, emulating a little bit the one of the classic western Shane. Schwarzenegger is not the most versatile of actors, but he manages to show the emotional evolution of his cyborg very well. We see him opening up to John and Sarah, and even start loving the kid. When he sacrifices himself in the end, we feel deeply for him, because the lines between the machine and his humanity has been blurred. And again, this was supposed to be just a cyborg movie.

Some aspects of Terminator 2: Judgement Day are quite curious to notice watching it now almost 30 years later. The look of the film is very early 90’s, and not just for the costumes (some of them are hilarious); the lighting and the tone of the images are quite characteristic of the period. It’s not a problem; it just dates the movie a little. But it has plenty to makes us ignore that.

Also, it needs to be addressed because it’s so funny: Terminator 2: Judgement Day came out when the buff heroes of the 80’s were still huge and one of the rules of the period was that every person that fought them had to be as big as they were. Schwarzenegger being the biggest of them all meant that every biker in the first scene, every guard in the psych ward and even people he had minor conflicts with were these huge bodybuilders, like the world was only inhabited by people who were really committed to their workout routines (something that came back in fashion in the Dwayne Johnson’s movies).

That is also one of the reasons Robert Patrick’s T-1000 was such a great villain; Patrick looked like he could be split in two by Arnold in a sec, but the gave his cyborg such a menacing glance you are scared of him with just one look. And the best part is that Patrick also gave him just a tiny bit of humor. You see he is enjoying himself with all that killing. While still being the most efficient killing machine around.

But the best performances of Terminator 2: Judgement Day come from Furlong and Hamilton. The boy makes his John Connor incredibly charismatic and his scenes with both adults are great; Hamilton makes the desperation of her character feel real in every scene she’s in. She gives Sarah Connor so much pathos, weight and sadness we are constantly in awe of how strong she is for not having completely lost her mind though she did lose it just a little bit yes).

Terminator 2: Judgement Day was a fantastic film when it came out. And we can still see why 28 years after its release. What a great movie.