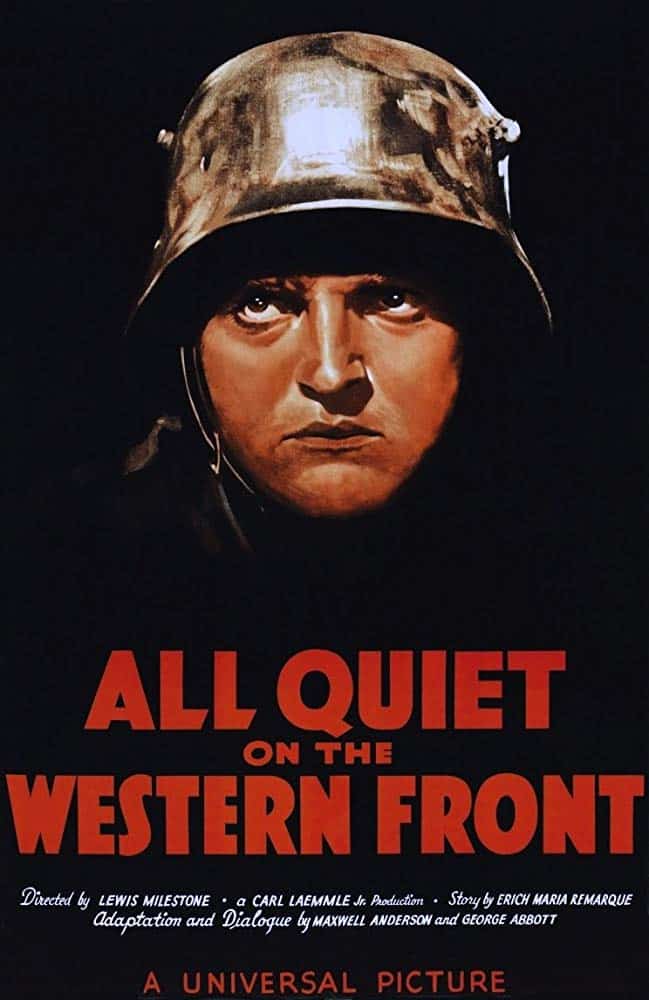 All Quiet on the Western Front is a one of a kind war film and is arguably one of the best films ever made.

All Quiet on the Western Front is a one of a kind film, and for different reasons. The artistry and the humanity presented here are undeniable but there is more in the history of this film. When German Erich Maria Remarque, a survivor of the first world war, decided to pen the book in which the film was based, becoming an instant hit back in 1927.

Soon after, all Hollywood studios were fighting over its rights. Surprisingly enough, Universal won the bid. The company wasn’t considered one of the majors at the time; they specialized in low budget films, and All Quiet on the Western Front was destined to become a big budget production. But producer Carl Laemmle, Jr. decided to go forward, spending a lot of money in it. He knew this was the film that could push Universal into the big leagues, and he spared no expense. He was right.

Laemmle’s investment made it possible for All Quiet on the Western Front to become a true cinematic experience. The film was originally released during the transition from silent to sound, a period when the studios were struggling to adjust to the new technology. The result of that struggle is widely known; the films were stagy, a lot of actors overacted, and the narratives became a hybrid and didn’t work in a lot of cases. It’s hardly possible not to laugh when watching films from that era, as a lot of them look so awful nowadays.

All Quiet on the Western Front was an exception. Laemmle hired director Lewis Milestone, who lead his team with a steady pulse. The result is a brilliantly technical film; the camera feels free and light, the actors are incredibly subtle, and the scope of it all is very amusing to watch. And most importantly: we are struck by the scope of it all but ultimately, the best part of it all is that the story never loses its connection to the characters. It’s a big budget film, but it’s disarmingly understated. It seems weird to say this, but the film doesn’t seem to fit in time it was made. And that happens because the scope and the size of it blend it perfectly with the strength of its groundbreaking story.

All Quiet on the Western Front follows a young, idealistic German soldier named Paul Baumer (Ayres) who enlists to fight in World War I. Very soon, the horrors of the real war, away from academic ideology, crushes his body and soul, destroying his relations and marking him forever. Nothing prepares us for the horrors of war. It doesn’t matter how idealistic our views are, it doesn’t matter if we foolishly romanticize war. In the battlefield, all the pretty words spoken to us are stripped away, leaving us with the fact that we might die any second. There’s no romance in the trenches, there’s no bright side to the fight. What happens to dreamers who become dehumanized by the same people that asked us to be there and promised everything would be fine? More so, how do we deal with the fact that those who urged us to fight using all sorts of idealistic babble are far away from the actual fight?

World War I was a particularly brutal war, and All Quiet on the Western Front doesn’t shy away from any of it. In a way is quite disconcerting since classic war films were not usually known for being critical with the war. In fact, many were used as propaganda for advertising the great sacrifice that war represents, turning every sacrifice into a heroic one and turning away from depicting how bad and ugly the fight truly is.

Baumer goes into the war sure he’s doing the right thing but he is stripped away of all his dignity once the fight begins. His character arc here is fantastic, showing us the destruction of one’s soul. All Quiet on the Western Front has so many iconic moments it’s impossible to choose one. But the ending might be the best one in that it is so cruel while so optimistic. Baumer is long gone, a shadow of his former self; he endured everything a man should not endure, and he survived. He is deeply broken, both on the inside and the outside. But then, this shadow of his former self manages to see beauty in a small butterfly in the middle of the battleground. In that little moment, in the middle of such a chaotic environment, we see Baumer become alive again, his good nature coming out, and that sparkle of his old self ignites all our hopes. We cannot look away from these men; they might be terribly broken, but we must search for the light inside. It’s there somewhere.

Everything about All Quiet on the Western Front is extraordinary. When it was originally released, the Academy Awards were still in their infancy. That year, it won Best Picture and Best Director. The film is far superior than those that won before and the ones that won after. It would be the best picture of the first ten years of the Academy Awards, eventually being topped by Gone with the Wind – and even in this scenario, many still give it the edge.

At the end of the day, All Quiet on the Western Front is one of the best films ever made.