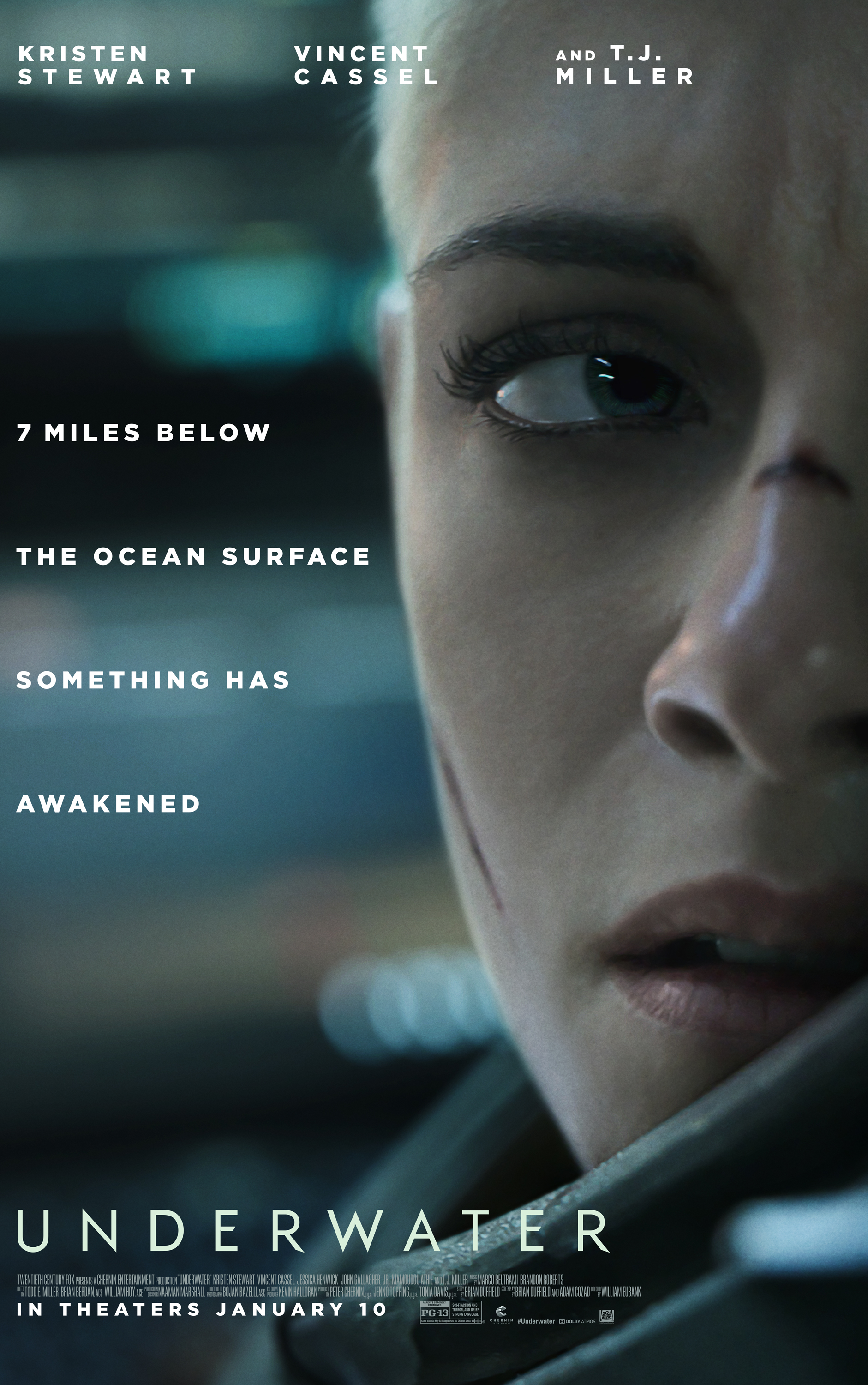 And just like Kristen Stewart in Underwater, this reviewer's faith in cinema is sinking to the bottom of the ocean.

Underwater. Under freaking water. This movie *exists* and as hard as it is to believe, it’s here and it’s out. It’s a questionably off-brand selection for a studio like Fox considering its recent acquisition by Disney – not only because of its far from family friendly execution and subject matter, but also its production quality that doesn’t fit their brand image either. In the end, should this film even exist? No. Is it even worth sitting through this train wreck? No……

From the opening frames of Underwater, it becomes clear that audiences will be treated to something far from special – and this consistently holds true throughout its 95 minute running time. The film’s opening title card, identical to that of Ridley Scott’s Alien is enough of a sign to expect something fully unoriginal. Every single beat throughout the film feels especially forced and surgically removed from it’s inspirations, leading the story to fall quite significantly flat. Not a single event occurs by surprise, and as an audience member, one can’t help but repeatedly ask themselves the same questions – Why am I here? and What am I waiting for?

The fact that Underwater is so dull is already quite problematic and the film’s somewhat talented cast doing nothing remotely special adds to the disappointment. Kristen Stewart has been making such great career decisions as of late, but Norah feels so forced as well as Stewart’s performance. Nothing is even slightly compelling about her character or any other, even with brilliant performers like Vincent Cassell coming into play as the captain. What’s quite fitting however, is the presence of T.J. Miller as a character named Paul, as he’s made as many bad decisions as the filmmakers did here.

This may be subjective, but for such a simple film, Underwater‘s plot is so convoluted from the opening minutes which only contributes to the jumbled nature and feeling of it all. There’s way too much focus here on creating a classic-feeling monster film that almost every important structural detail necessary is just skipped as it goes from something so menial like Norah brushing her teeth straight to ships exploding to creatures popping up and characters getting violently attacked. It’s a shame, as taking advantage of such a simple premise could’ve allowed for a much more engaging and arguably, stronger film.

What can be said about Underwater, however, is there’s some questionably good production design here – the design of the ship and the strong presence of a dark color palette infused with bright neon blues is quite visually appealing.

At the end of the day, a film like Underwater doesn’t really have a purpose of existing with the scale and budget that it has, especially considering this is money better served for underrepresented voices, talent in general or perhaps even feeding the homeless or something – but that’s not to say the film won’t find an audience.