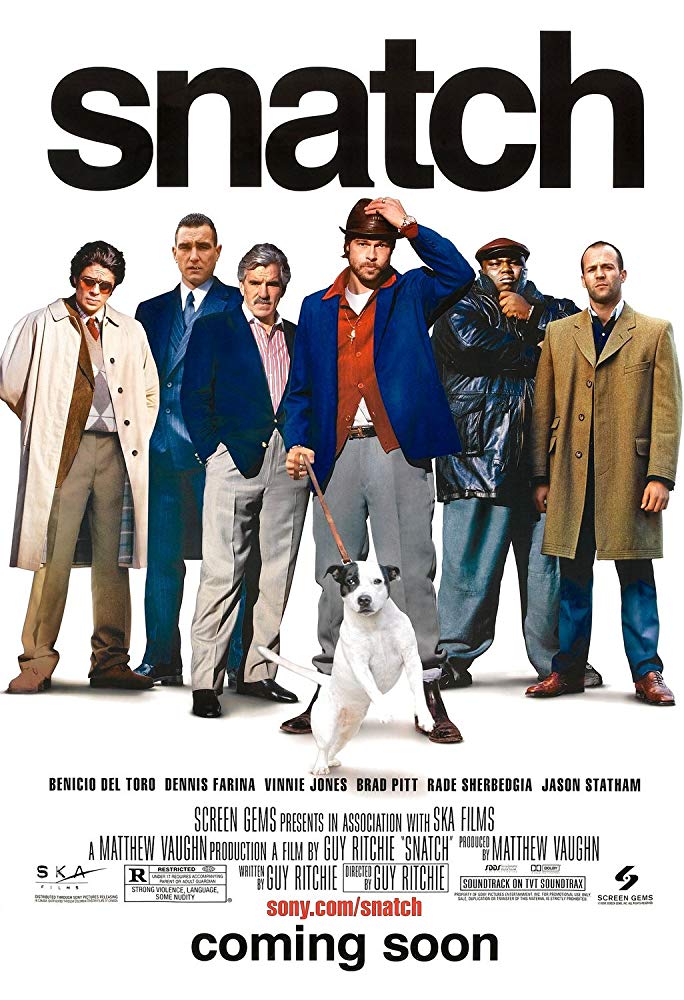 Guy Ritchie’s English caper movie masterpiece may have its problems but is undoubtedly a fun experience with a brilliant soundtrack.

Snatch in arguably Guy Ritchie’s most hyped movie. After Lock, Stock and Two Smocking Barrels was first released and has since gained cult status, everybody wanted to see what Ritchie was going to do next. This film was pretty much the same movie that Smocking Barrels was though on a bigger level and while featuring more famous actors.

The story in Snatch is too complicated to explain – or even to understand sometimes. To sum it up: a lot of people from the underground are trying to steal a super-sized diamond that’s being tossed around from one another, including a hustler named Turkish (Statham); Cousin Avi (Dennis Farina) a Jewish New York mobster; a crazy mother***er named Tony (Vinnie Jones); Frankie Four Fingers (del Toro), a thief; and a gypsy boxer (Pitt).

Snatch continues many of Ritchie’s visual tricks. In a way, he is kind of a magician; he’s distracting us with editing, crazy camera movements and cuts, to avoid us from seeing that there is not a lot of character development to be found here. But the thing is: he imbues the film with so much fun that it becomes easy to let this pass. The characters are so enjoyable, the twists are so much fun (even when they don’t make a lot of sense), we end up accepting things the way they are, so we sit back and have our fun.

The cast of Snatch are certainly in on the joke; we can see how excited they are for doing all the craziness, and they deliver. The highlight here is Pitt, fantastic as the gypsy with such a thick accent no one can truly understand what he’s saying. It’s hilarious to see him speak and the rest of the cast not having the slightest idea what would come out of his mouth. But Pitt’s performance is not just gimmicks: the turns in a real lived in character, one that becomes probably the most interesting in the entire film. Statham, who might as well be considered the film’s true lead, carries the film very well.

It is also worth mentioning that the soundtrack is brilliant. Even if happens to not like the film and complain about its plot holes (there are many), this has to be agreed, the music in the film is spot on. Though at the end of the day, Snatch is a very energetic caper, one that entertains if you agree to suspend your judgement a little bit.

Color Out of Space – A Purple Tinged Lovecraftian Nightmare