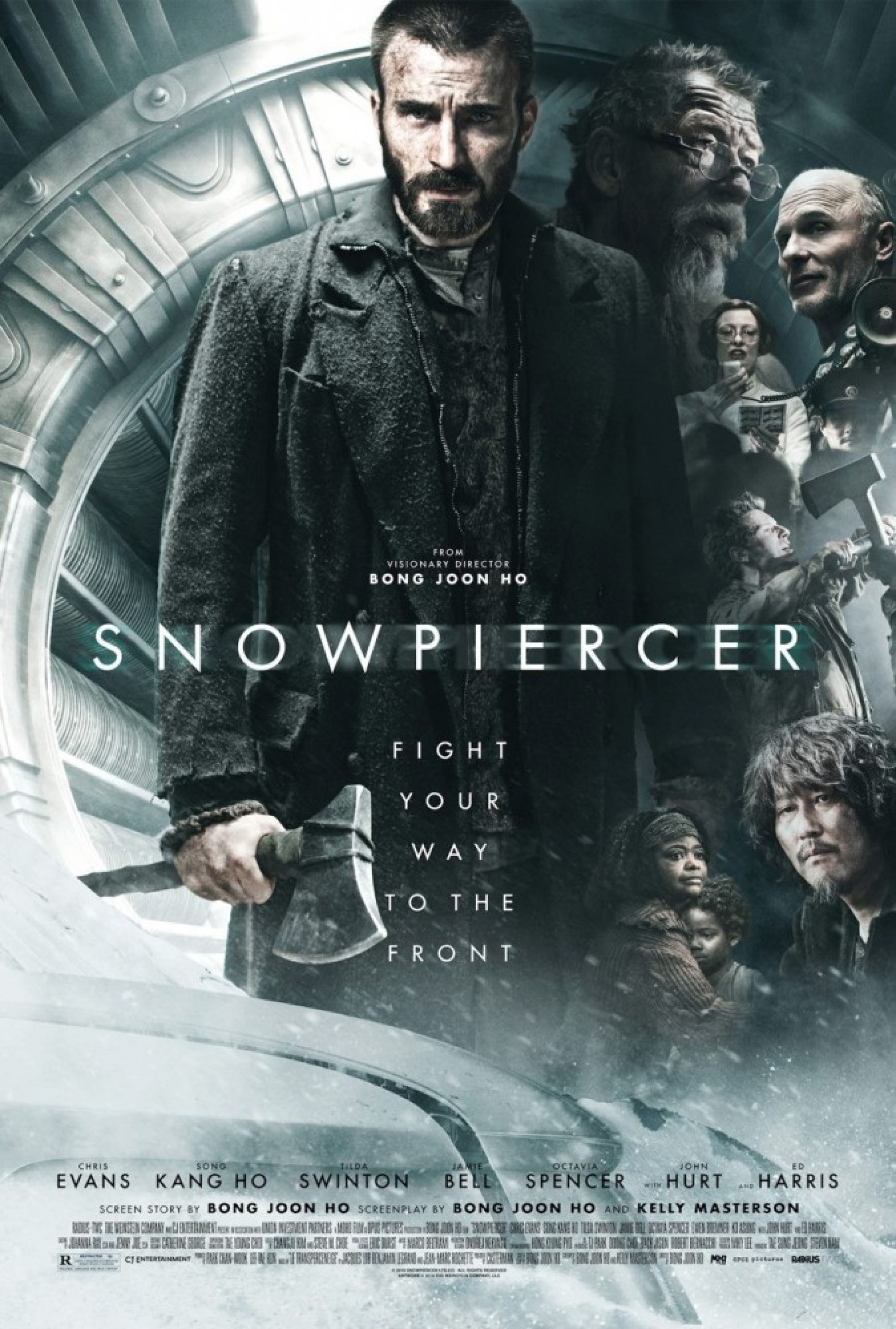 Snowpiercer is an ingenious and thrilling and substantive sci-fi action film that gets better after every viewing.

How wonderful it is when we find a sci-fi picture that is actually ingenious. We get tons of every year, but few are really worth a second glance. Snowpiercer not only deserves our attention, but it actually gets better and better with every new viewing.

The Snowpiercer is a super train, one that circulates the Earth carrying the remainder of humanity after the second ice age stormed the planet. Just like the world outside, the train is divided by class systems, with the poor being relegated to the back. Living in impoverishment, eating a jelly concoction made of cockroaches and without any hope, they are explored and dehumanized by the upper classes. Tired of being so demoralized, of having their children stolen by the upper cars, they decided to fight their way up to the front. The rebellion is led by Curtis (Evans), a man who cannot bear the atrocities he sees anymore. With the guidance and council of a man named Gilliam (John Hurt), helped by a friend named Edgar (Bell), by mothers looking for their stolen children including a woman named Tanya (Octavia Spencer) and by two tech-savvy friends, Namgoong Minsoo and Yona (Kang-ho Song and Ko Asung), they fight their way through every new car.

Snowpiercer is far greater than similar movies because it succeeds in two distinct areas. Not only is it a great action/adventure film, it is also one of great substance. In terms of action, it’s incredible how exciting the film’s fight sequences are. Locked inside a tight environment of the train’s cars, director Bong Joon Ho manages to make every new sequence a thrill, exactly because of the tightness of the environment. There’s no place to escape, nowhere to go. These people need to fight and fight hard. The tunnel battle, the shooting on the loop, the fight in the sauna car; all these scenes are so exciting to watch. They are made better because the script and direction make us care deeply for the characters. Even minor characters like Grey (Luke Pasqualino) are exciting to watch, and we connect to them. So, when the fights happen, we are totally invested in seeing who’s going to survive or not.

Adding flavor to the mix, the script of Snowpiercer brings a lot of depth to the picture. Curtis has a monologue about eating babies that is chilling to watch. The film tackles class systems, of course, but also the worshipping of a sacred leader in Wilford (Ed Harris), which is quite disconcerting, how people at the top of the food chain plan and play with the lower classes, how a pretty exterior hide the true sacrifice under its shinning front. There’s so much being said here that the script could lose its way and be confusing but fortunately, it never is. Meanwhile. the whole cast is great here, but it is impossible to talk about this movie and don’t mention Swinton as Mason. Mason is a fascination creation; she is mesmerizing in it. It’s such a completely insane character, with so much weirdness in her, she makes you laugh and be appalled sometimes in the same sentence. She is really the standout in the cast.

In the end, Snowpiercer is the kind of film that only gets better after multiple viewing. So watch it, and then watch it again.

*still courtesy of The Weinstein Company*

The Trip to Greece - An Extremely Funny and Layered Dramedy