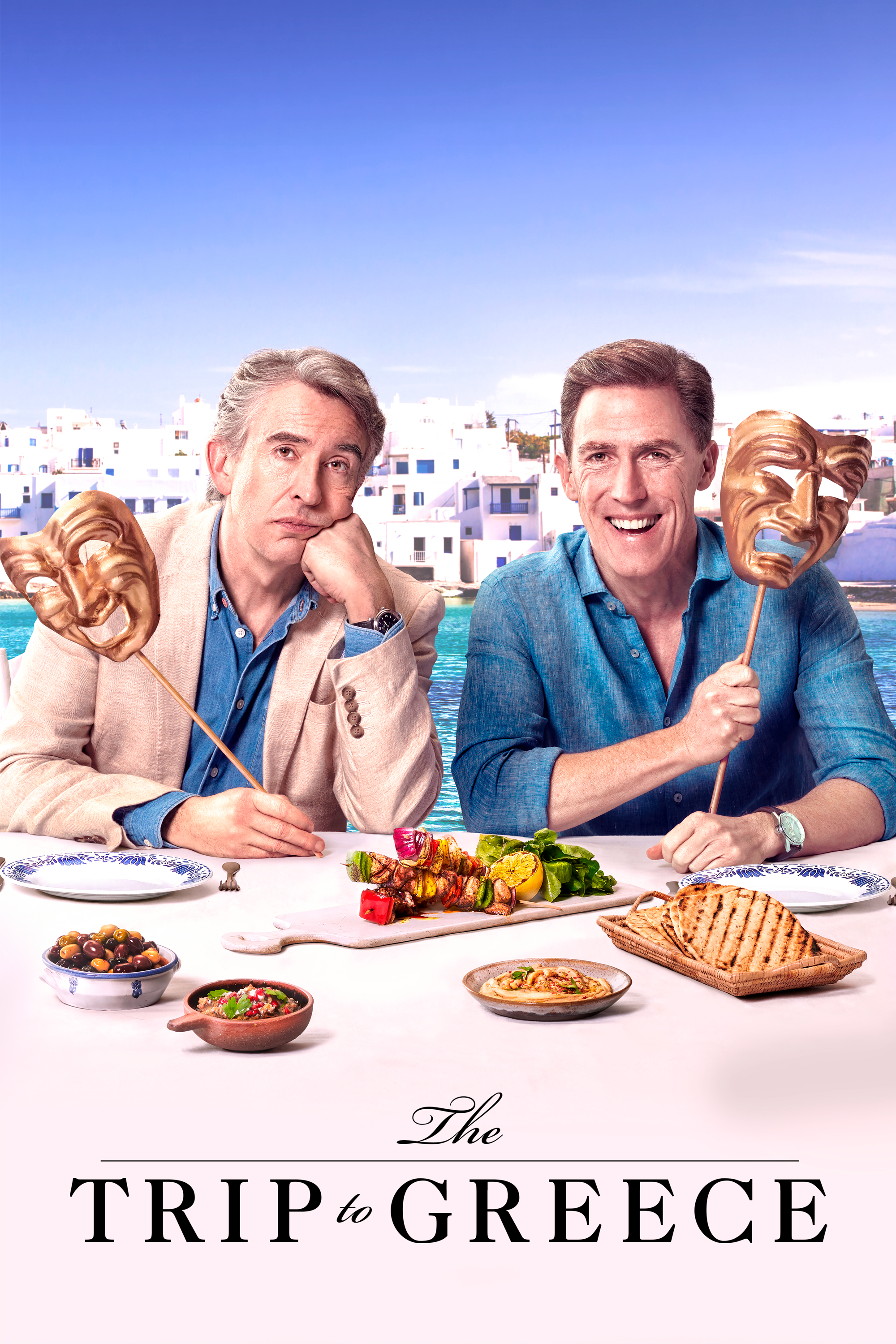 The Trip to Greece serves as a compelling rendition of the series’ familiar set of elements, forming the best film in the series since its debut.

Looking back, it’s strange that a movie like 2010’s The Trip has spawned a four-film series, but we’re better off with every one of them. The formula of Steve Coogan and Rob Brydon bantering around Europe while driving through beautiful countrysides and eating lavish meals is potentially endlessly repeatable and rewatchable. One could be a lot more specific while still describing every one of these films – visiting historical landmarks, a photoshoot, sober nightly phone calls, dream sequences – they don’t exactly reinvent the wheel with each new film. Instead, The Trip films sail almost entirely on the talent of its stars and director, Michael Winterbottom.

There are a few things any review of a Trip movie needs to get out of the way – there’s not much new to say about them, but they’re more than noteworthy. Especially in a time where casual travel is essentially forbidden, The Trip to Greece is very enjoyable. Just like proper travelogues of the late 19th century, it’s like you’re travelling on a finely curated tour from the comfort of your home! Same goes for all the food that’s showcased across the many restaurants they eat at. The food looks incredible, especially with the in-kitchen snippets we get…obviously that doesn’t have a huge impact on the film, but it makes it even more of a pleasant experience.

The editing and cinematography were surprising, making The Trip to Greece look very nice while the editing does a great job of facilitating the unconventional flow between freeform scenes of pure humour to sweeping travel. It’s especially impressive how tonally effective the editing is taking into account that this film is essentially edited in half from the version that aired on the BBC. Of course, watching Brydon and Coogan just talk and riff on each other is always wonderful. They’re consistently hilarious, and it’s such a comfort to listen to them talk, flowing from joke to joke and telling anecdotes like you’re sitting in on a conversation with two friends. It’s hard to overstate how good these guys are at their jobs.

What might be most interesting about these films isn’t their format or their comedy, but the stark threads of sadness and drama which always break through an otherwise carefree journey. These moments in previous instalments, regularly coming at the end of each day, usually felt like unnecessary distractions from the meat of the film. They also never felt very distinct to me, as the story told in these moments was relegated so much to the background that it never got the chance to have that much impact. The Trip to Greece improves on this vastly. A major subplot involving Coogan’s father in the hospital drives the film, though not very conventionally. It plays more into the nuances of the characters and the film’s ruminations on age and death. It’s been ten years since the first Trip, as Brydon and Coogan bring up in one of their first scenes. Not only are they older now, but it feels as if the repetition of the previous three films has fully developed their on-screen friendship and dynamic.

The Trip to Greece sees Coogan gives a legitimately great dramatic performance as a warped version of himself while buried in improvised comedy and layers of narcissism are deep insecurities. The duo has always had a casual culture of one-upmanship, but the usually smug Coogan (character, not actor) is depicted here at his most emotionally vulnerable. Coogan’s Coogan is starved of the stability and happiness that Brydon’s Brydon has, so he constantly attempts to validate himself in other ways. He brags about having more BAFTAs, better looks, better impressions, greater acting prestige. He only becomes more insecure as he keeps losing micro-competitions to his friend, the “light entertainer.” It’s a surprisingly interesting and layered character for a film series for which many largely associate with the comedy. Meanwhile, Brydon is also great as Brydon. His role is certainly more understated than Coogan’s Odyssey of sorts, but he still plays his role excellently, especially towards the end.

There are no grand finales or major character developments to be had here; these films are not about characters taking arcs so much as them stewing in their passive problems and insecurities while keeping the other at arms’ length, for better or for worse. In this way, and in the meta context of the creators consciously ending the series, The Trip to Greece seems to be contemplating repetition. Coogan and Brydon are both beyond the capacity to completely reinvent their lives. One of them is content to rehash his current routine for the rest of his life, and the other isn’t. That said, there is a notable absence of Michael Caine impressions from this film, so maybe we’re not all forever doomed to total repetition.

The Trip movies not have had a tremendous evolution over their ten-year span, but if The Trip to Greece really is the final ‘course’, it’s ending on a high note.

Thoughts on The New TENET Trailer