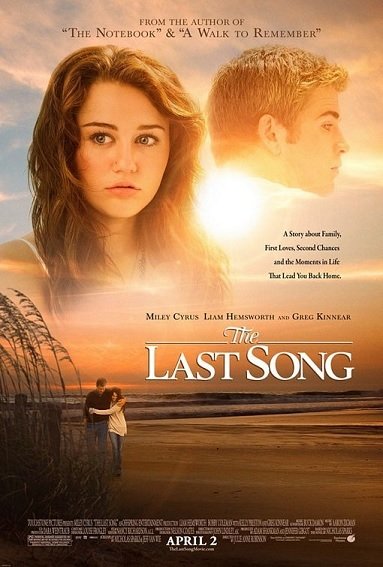 The Last Song is exactly what you’d expect: cheesy, cliche, yet still entertaining.

Synopsis: A rebellious girl is sent to a Southern beach town for the summer to stay with her father. Through their mutual love of music, the estranged duo learn to reconnect. (IMDB)

Just to make this clear from the start, The Last Song really isn’t bad. Cliche? Sure. But it’s not a terrible way to spend 107 minutes. The premise is a familiar one: rebellious teenage girl named Ronnie (Cyrus) falls in love with an incredibly charming, rich local guy named Will (Hemsworth). The surprising thing is that they didn’t focus that much on the “forbidden love” aspects of things, like in A Walk to Remember. One thing can be said for sure: it makes this film way, way better.

The highlight of the film is definitely Hemsworth. He owns his character, and any scene that he’s in is quite enjoyable. Cyrus is okay, but she’s never been the best actress. Her performance is fine, although her character can be annoying at times. The story, although familiar, is entertaining enough to warrant its runtime. Another strong point for the film is the storyline between Cyrus and Kinnear as her father Steve. There are parts that definitely don’t work, but for the most part, it adds to the film.

If you’ve seen The Last Song, you know why it’s called The Last Song. Without spoiling anything, that part of the film didn’t quite work. The ending isn’t as satisfying as one would like it to be. It tries to twist the formula a bit towards the end of the film, and that is ultimately the worst part of it. It feels manipulative, out of place, and not really necessary.

The script is serviceable. Nobody is seeing The Last Song for incredibly written dialogue, so the fact that it falls flat at points doesn’t really affect the experience that much. The characters are a huge point of improvement from A Walk to Remember; both of these characters are people that you can actually root for. The same goes for Kinnear’s Steve. You can actually empathize with these characters, which adds to the positives. For the target audience, it’s probably similar to what they would expect. For someone that this film is definitely not intended for, there was enough in it to stay entertained, which came as a surprise.

Overall, there’s nothing that’s new in The Last Song, but that isn’t really necessary when you’re making a film that’s directed towards teenage girls. There are points in the film that are genuinely funny, and the characters are likable enough. Hemsworth is the star of the show here. Although The Last Song occasionally goes off on bad side tangents, the general storyline is entertaining enough. It’s a mediocre film, but entertaining enough to warrant its running time.