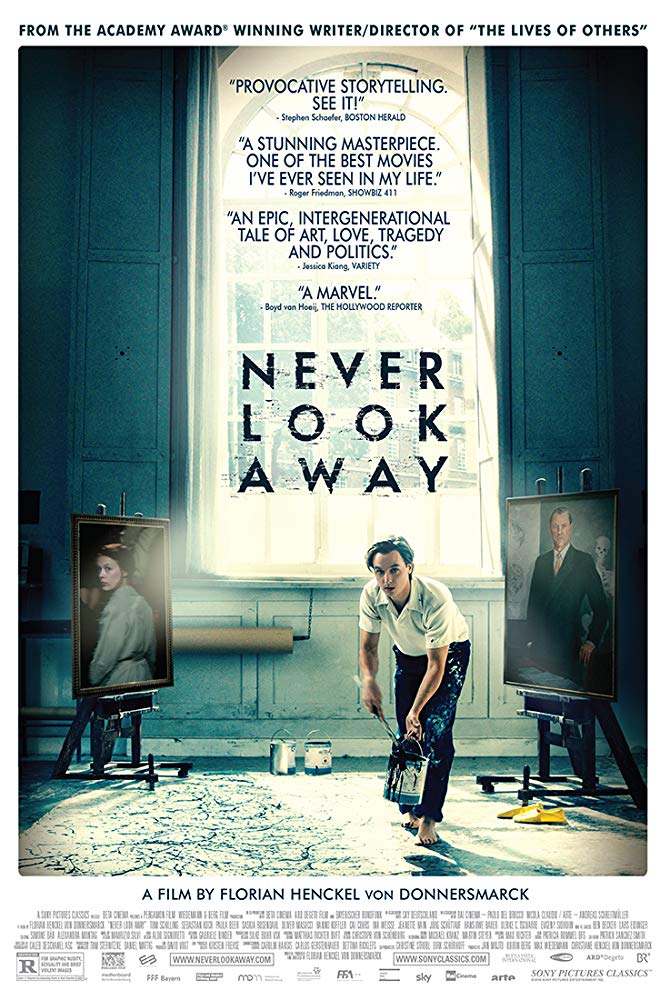 The sheer density of Never Look Away is confounding.

Synopsis: German artist Kurt Barnert has escaped East Germany and now lives in West Germany, but is tormented by his childhood under the Nazis and the GDR-regime. (Mongrel Media)

After seeing the film, it was tricky to recount exactly what happened throughout the 3 hour running time. It’s a driven and captivating film, and at the same time, it’s also grade-A melodrama, extended and overwrought at the length. But still, I wouldn’t recommend cutting any inch of Never Look Away. There’s something beautiful and powerful in every frame of this film. It’s a masterfully made film, coming from a script that’s somewhat laughable, and watchable all the same.

Opening in Nazi-era Germany, we follow Kurt Barnert (eventually played by Tom Schilling) throughout his youth, and in particular, his relationship with his Aunt Elizabeth (Saskia Rosendahl). She takes him to art exhibits in Germany, while encouraging Kurt’s interest in art. We also meet Carl Seeband (a devilish Sebastian Koch), a doctor who will eventually come into play. The film follows Kurt’s different periods of his life, even leading all the way into the 1960’s, where he works to make an artistic breakthrough. The moments in between are best left to the viewer, but the plot twists in almost laughable, yet absorbing and captivating ways.

The real quality of Never Look Away comes in the technical aspects. The first notable and striking part of the film is the visual look. A combination of the cinematography and set design, every visual note this film plays is perfect. Every shot is composed perfectly, and drenched in pure scenic beauty. There’s a shot of wind flowing through fields (hold for laughs) and it’s one of the most enchanting shots of the year, somehow. Caleb Deschanel creates a dull and simultaneously distinct look for the film, in which certain shots won’t be able to leave your head. The period and set design, which covers numerous decades, feels like a film with a budget of 50 million. Somehow it all comes together, except when it comes to the actual content of the film.

Never Look Away pontificates about art, youth, relationships, and shows all of those things in unsubtle, flailing detail. For a film about an artist, there are so many sex scenes and butt shots. While maybe not crucial, the gratuitous nature of those do help create the feel of an epic. So does the plot, overlaying a plot more concerned with 2018’s Operation Finale than art, with the story of Kurt Barnert as an artist. While these two do combine into an understandable whole, the way the two stories mesh are something out of a poor paperback thriller, never really feeling justified in the portrayal of the more Nazi-related plot.

And yet still, even with the odd Oedipus-like complex our lead character has, Never Look Away is entertaining. You never lose the film at any point across all three hours. It’s deeply fun to watch, due to the direction and the cinematography which keep this film visually entertaining. The acting isn’t anything exciting but both Sebastian Koch and Oliver Masucci chew the (beautiful) scenery, and it’s a delight to watch the way this story plays out. This is a mixed sort of recommendation as the jury is still out about whether this is a good movie or not. Still, it wasn’t the worst experience and if you’ve got 3 hours to kill, you might as well.

Five Films to Watch If You Like 'Captain Marvel'