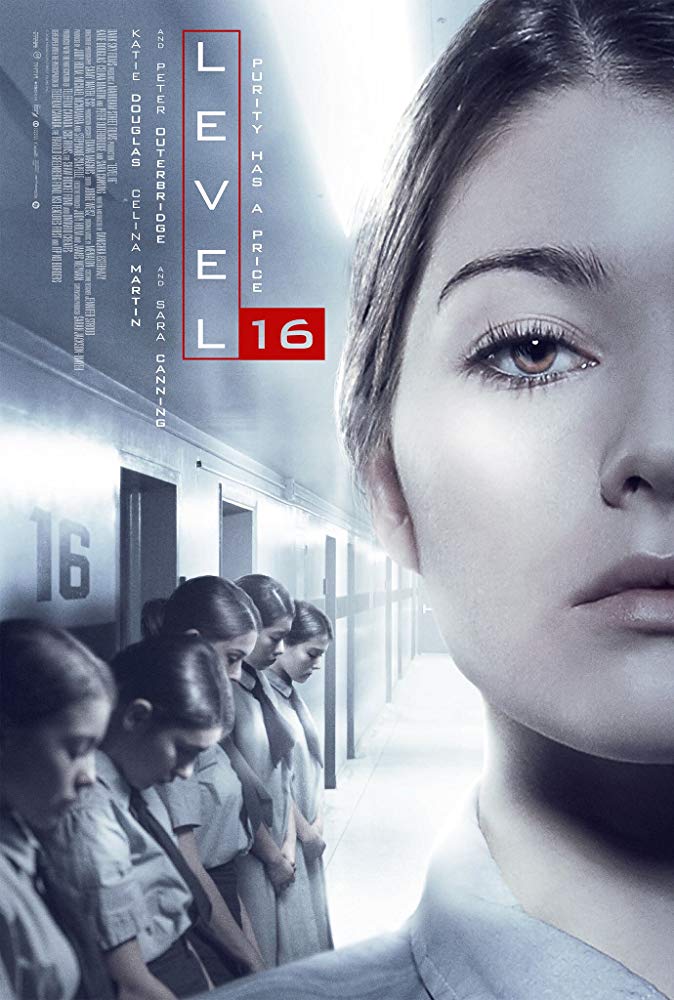 One of the worst crimes a film can commit is just being okay. Possessing the ability to do, show or say more and not attempting to do so can easily place films in a realm of quickly being passed over and forgotten.

Synopsis: The walled-in world of 16-year-old Vivien is and always has been the Vestalis boarding school, supposedly a refuge from an outside world rendered toxic. It’s a neglected, antiseptic institution where girls without families are monitored, their day scheduled practically to the minute, and “education” consists of a constantly repeated list of “feminine virtues” – obedience, cleanliness, patience and humility – preached by a matriarch and propagandized in moral-hygiene films. And, as per her age, Vivien has reached “Level 16” in her education and is ostensibly ready to be adopted by an outside family. But her friend Sophia thinks something else is going on at Vestalis, something frightening. (Raven Banner Releasing)

At times, Level 16 flirts with this unseen line by testing its limits in wanting to be more than the sum of its parts but during others it shows great potential to be something unique. On paper, it sounds very interesting – young girls are being groomed in a remote location to live clean and healthy lives with no exposure to the outside world in order to be adopted by families once they reach a certain age for purposes unknown.

It even does a great job at creating a haunting aesthetically pleasing atmosphere that focuses on minimalism that is strange enough to pique one’s interest. This is heightened beautiful and well-crafted cinematography that also help feed into its ominous ambiance. But the main strike against itself lies in the story’s pacing that methodically seeks to undo the mystery it works hard to build by quickly becoming a predictable outing of entertainment.

The film does manage to do some things well, creating some reluctant engagement until the end. It’s use of color, or the lack thereof, with the wardrobe, walls, lights, etc. are expertly chosen to hammer the feeling of bleakness and desolation into the viewer but is able to accomplish this subtly in the background in every single shot. The setting is easily its own character posing as an omnipresent and immovable persona that the girls are forced to interact with it on a daily basis. The actors do well, while supported by a satisfactory script, but rarely show any outstanding emotion instead relying on cryptic dialogue to do most of their work. Nothing groundbreaking occurs with these elements but they both were stronger than anticipated and help better shape the film.

Still, while all of those aspects were done sufficiently, the film faltered in the place where it mattered most – its story. At first, the story does a good enough job of setting the foundation for an intriguing plot over the course of the first act as we see the protagonist’s limited worldview the result of which allow for questions to be raised that keep the audience invested.

However, the continual build-up of suspense quickly overstays its welcome as the true nature for where and why the girls are living isn’t revealed until very late into the second act and by then all of the emotional investment the movie has managed to garner with its audience has all but disappeared due to lack of urgency in moving the plot forward. Avoiding spoilers, once these details come to light and the mystery is revealed the resulting emotion can be best summed up as a simple shoulder shrug that has been told more efficiently in other products that came before it. While not trying to be overly critical but the film’s final moments were disappointing when taking account the entire story.

Level 16 gets some things right which helps its audience stay semi-invested but it falls short in the most important aspects meant to create a complete and compelling story. Its ability to build a seemingly bleak and hopeless setting and show people interacting within it for a mysterious purpose allows for it to operate on a large berth of grace well into its running time, however, it squanders the opportunity to truly make an impactful mark once the mystery is uncovered. While the film did have some good moments it also could’ve achieved far more than what was realized.