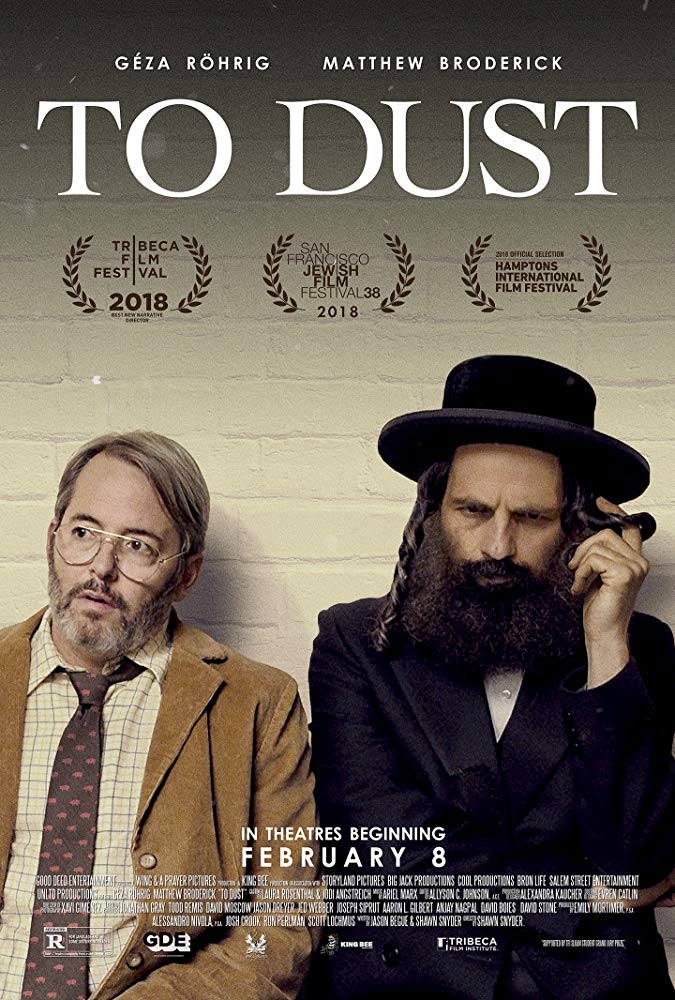 To Dust is an odd and off-putting buddy tale held up upon the religious fables of Hasidic Jews and dark humor whose tone never comes together, leaving the film feeling awkward and devoid of something more solid at the core.

In the prologue of A Serious Man, the Coen Brothers’ classic rumination on Judaism (along with other things), a family accidentally invites a dybbuk into the house for dinner in the prologue of the film. It’s long been a source of discussion for that film, but when it comes to the Tribeca Film Festival Audience Winner, To Dust, talk of a dybbuk is not the oddest thing going on in this dark comedy about grief and the limits of grief. The burial of a pig, which our lead character use to study the decomposition of a live creatures, is.

To Dust opens with a relatively deceptive opening scene, portraying the death of someone, who we soon learn is the wife of Shmuel (Röhrig), a Hasidic cantor in a small Jewish community in upstate New York. In the film’s most daring scene from a directorial standpoint, we see Shmuel dreaming about his dead wife’s toe, which decays into a flower in a beautifully animated sequence.

Shmuel soon finds college science professor Albert (Broderick), who he soon recruits to help him put his night terrors to rest. That’s pretty much putting it lightly, leaving out the deep oddities of the film which fails at its dark humor, but succeeds in a portray of grief that is hyper-specific and affecting. It’s a mixed bag, considering the majority of the film is aiming for dark humor, but the genuinely great parts are few and far between the supposedly humorous segments.

Sure, our two primary actors do a quite solid job. Röhrig gives an incredibly striking portrayal of manic grief, in the sort of way where every gesture feels live-in, and genuine. He embodies the person who is trying so hard to live with the passing of his wife, but just can’t, and his performance is commendable and unique. Broderick’s character feels a bit more one dimensional, as he’s a stoner Jethro Tull fan with the attitude of Dante from Clerks. While his performance surely isn’t bad, it’s made up of quiet huffing and puffing – loud sighs, the obvious signs of exhaustion, and a constant muttering under his breath. Broderick is usually a delight on screen, but here he just fits the formula, opposed to going above the material.

Speaking of which, the biggest issue with the film is its tone. It’s constantly dark, treading the line between tragedy and comedy, a mix which is near impossible to get right. While the overt darkness of the film is aided by some great cinematography which would perfectly cast the film in a certain depressing, however, the majority of this tightrope doesn’t really work. It’s an honorable attempt but it’s clear that this would work far better without the dark humor here.

If this was just a portrayal of grief for a Hasidic man, in a community that doesn’t support him enough, genuine drama might be found here. There could be an entire film about a Hasidic man grappling with being a single father here, which probably would have played far better. Instead, the film ends on a fluke, feeling like a missed opportunity.

Ten Game of Thrones Episodes to Prepare for Season 8