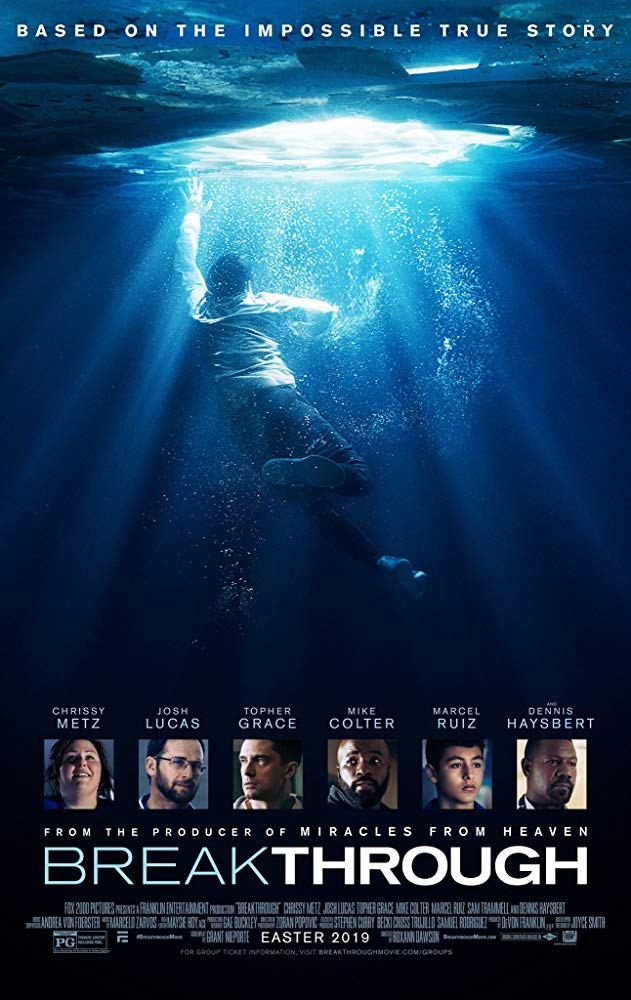 Breakthrough is one of those movies has its heart in the right place, but lacks merit within its own narrative story conviction for its cinematic world. It’s well-acted and well-represented, but just simply comes up short with its predictable nature and overly familiar religious overtones.

Joyce Smith (Metz), her husband Brian (Lucas), and their 14-year-old adopted son John (Ruiz) live in a small town near St. Louis, Missouri. While goofing off with a couple of friends, John falls through a frozen lake, plunging into the icy waters. While first responders come to the rescue to save the teens, John is found unconscious and unresponsive. Joyce is not ready to give up on her son. With her husband and their local church pastor Jason Noble by her side, Joyce anxiously await John’s outcome with the community offering prayers and concerns for the youth. However, while John’s road to recover is long, Joyce’s unwavering faith in “the Lord’s Plan” for her son poses a stark contrast to the medical reasonings of John’s doctors.

Directed by Dawson, Breakthrough is the latest film faith-based films based on real-life true accounts. The movie itself is a gentle story of a miracle that happens in the bleak situation, finding Dawson’s efforts to be meaningful in how she presents Joyce Smith’s story. Dawson finds heart within tragedy and hope through troubled times, such as how the trauma of Josh’s accident would cripple a family. Collectively, everyone loves a “feel good” movie where miracles happen and Breakthrough tells that narrative to a fault. Unfortunately, the film fall prey to pitfalls that similar features run aground on…most notable on its religious overtones. The film’s appeal might lean towards to religious viewers more than causal moviegoers. The film comes off as a little preachy and is rather on the nose when it came to its religiousness which only hinders it.

The film’s biggest drawback is in how predictably and formulaic everything plays out thus nothing that happens here should come as that much of a surprise for viewers. The plot of the movie is good, but the conflict plight that plays out lacks cinematic conviction and inner turmoil. We feel for Joyce but there’s little beyond that; making the journey less-interesting than what the movie really wants to be. The science vs. religion debate would also overstay its welcome. In essence, Breakthrough feels more like a Lifetime or a Hallmark Channel film rather than a theatrical one.

The cast in the movie has several recognizable faces, including Metz who gives a great performance as Joyce, carrying the majority of the emotional moments though is weighed down by the narrative itself. Lucas, Topher Grace, Mike Colter, and Dennis Haybert each do a solid job in their respective roles. Ruiz is good as John but he’s merely the catalyst for the entire story.

In the end, everyone loves a good story of a “miracle” (and justly so) and Breakthrough will provide that…. for those seeking it. It’s just not the greatest cinematic representation of such a “true life” event” to come from Hollywood.