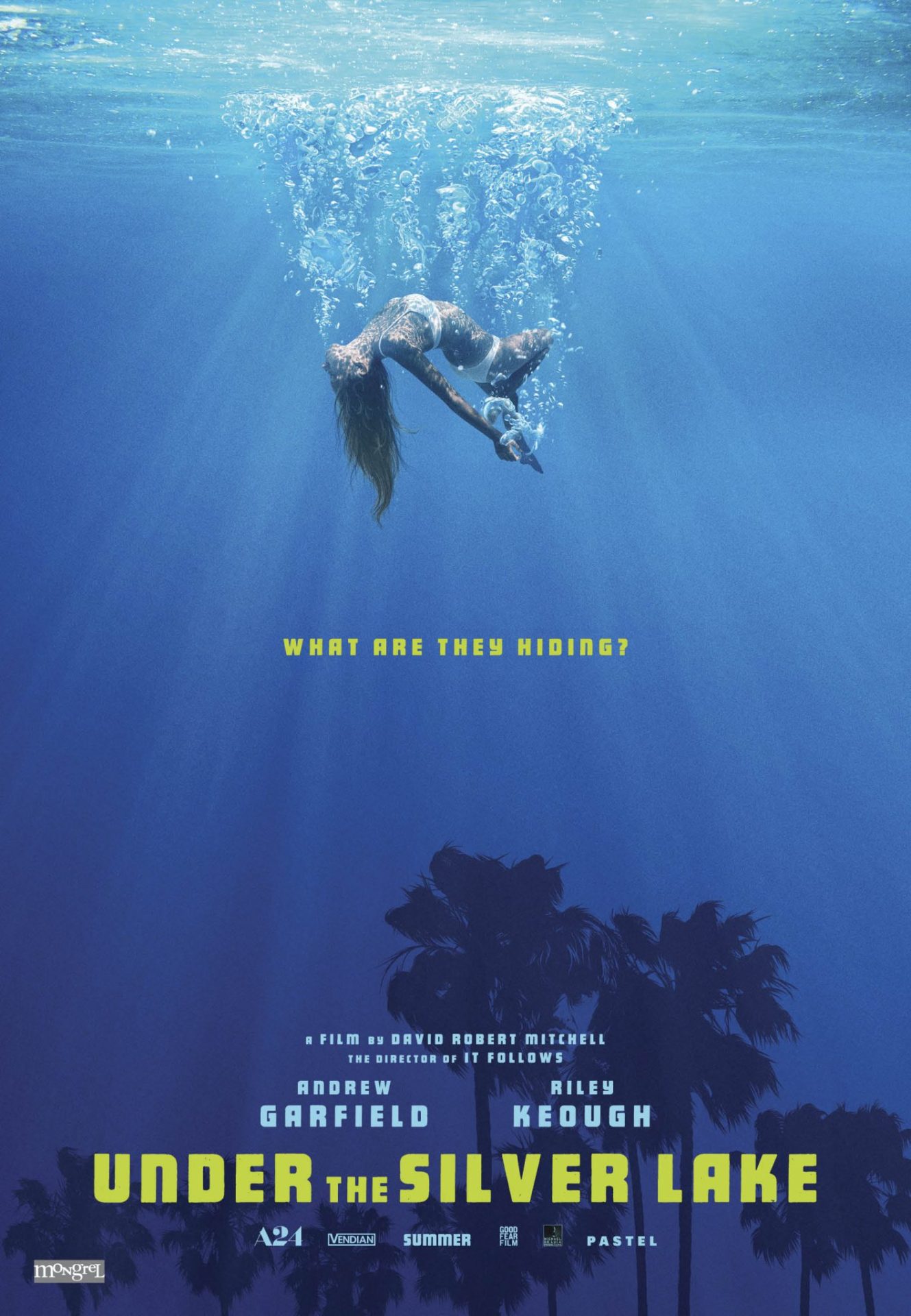 Under The Silver Lake is an overambitious dark comedy that may take a few missteps along the way but nonetheless still entertains thanks to a great score and a memorable performance by Andrew Garfield.

After countless delays, Under The Silver Lake has been unceremoniously dumped onto VOD (better late than never I suppose). At least now, more people will get to see one of the most ambitious and original films in recent memory. However, the film clearly won’t be for everyone and will surely polarize some viewers as there’s only so much of it they will be able to take. The followup to writer/director David Robert Mitchell’s equally polarizing film, It Follows, this film takes a much different approach as a stoner/slacker fantasy and darkly-comedic crime film. On paper, there is way too much going on here to work and while this more or less was the case here, the film works more often that not despite a few missteps along the way.

The story was about Sam (Garfield), a disillusioned man who one day came across a mysterious woman named Sarah (Keough) who would disappear soon after. Embarking on a quest across Los Angeles to find her, Sam would find something beyond his wildest expectations at play here. The film arguably goes a little too far at times with all the oddness it threw at us but it never fully went off the edge. Suffice it to say that Sam was an odd character and was mostly a paranoid recluse obsessed with hidden codes and messages in pop culture much to the detriment of everyone around him.

From there, the film would become a modern noir mystery as Sam’s quest would take him on a series of strange and unique characters in strange and unique encounters while occasionally putting himself in compromising situations as he would uncover the truth behind Sarah’s disappearance. Over the course of the film, we would also learn more about the true history of Los Angeles as well as the mystery behind the nearby Silver Lake and how they would connect to Sarah’s disappearance. These would be fun and often hilarious to watch though the story would sometimes get off-track as it would go on these strange and inconsequential tangents that would seemingly go nowhere. These may have been few and far between, however they would add up, leading to a slightly too long running time of nearly 2.5 hours.

While some of the stops were better than others, the journey as a whole was the best part. Technically speaking, the film’s sense of style was on point here, oozing plenty of personality. The film was beautiful to look at from its cinematography, to its inventive set designs and costumes. As much as the film was beautiful to look at, the score was even more impressive, fitting in with the overall zaniness while still setting the tone nicely. These may all be good individually but it was ultimately the combination of all these made it work and put the film over the top.

Though at the end of the day, none of Under The Silver Lake would have worked if not for Garfield’s terrific lead performance as Sam, the film’s only prominent character. He single-handedly carries the film and was compelling to watch throughout as a sleazy young man who was clearly in over his head but he never looked out of place. Aided by a sharp script, he was hilarious and charming. Keough as Sarah and Grace as Sam’s friend were both solid in minor roles.

After all the buildup, where the film perhaps faltered most was its ending as it tried to tie everything together and as a result, may disappoint some but the satisfying journey will more than make up for this,

Coming Soon to keithlovesmovies (Week of May 1st)