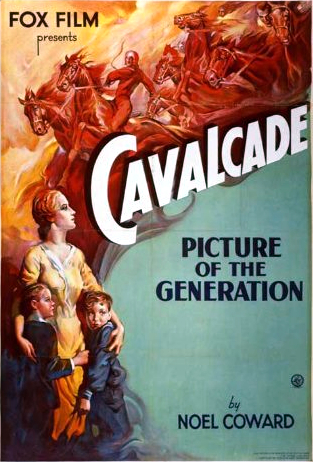 For those who are curious about the first years of Oscar, Cavalcade is totally worth the look. But if you are looking for a great classic movie, you can pass this one without a doubt.

More curious than qualified, Cavalcade is one of the less remembered Best Picture winners.

Cavalcade follows the lives and troubles of two English families through over 30 years, from New Year’s Eve, 1899, to New Year’s Eve, 1933: the rich Marryots and their employees, the Bridges. While life goes on, these two very different families face several historical events and fight to keep their loved ones and their values protected and secured.

Cavalcade has “prestige picture” written all over it. It is such a proper representation of British life it almost seems like it’s going to serve you a cup of tea with the opening credits. The film was an ambitious production, curiously, not an English one, but American. In a way, the ambition works both in favor and detracting the film. It gives it size and strength, and it is very rewarding to watch such a great production, with big scenes and hundreds of extras. Just to name some of the passages, World War I and the the sinking of the Titanic are part of the story. But, in a way, it also makes it feel more pretentious than it should, and that distracts us from some of its qualities.

Especially, what commands our attention is the work of the director and the actors. Lloyd was at the top of his game at that time, and he makes the gigantic task of comprising 34 years in less than two hours seems easy, and most importantly, makes it all feel logical and emotionally connected. The actors deliver in the difficult task of creating these characters and turning them believable and relatable. The standout here was Wynyard, who turns Jane Marryot into the emotional center of the entire picture. Her partnership with Mr. Marryot (Brook) worked great and Ellen and Alfred Bridges (O’Connor and Herbert Mundin) as they made us care for their characters.

The performances make the most of the episodic nature of the film, but they don’t solve all of the problems here. It still felt like watching a stiff, by the book representation of the period portrayed. It would also sometimes look a bit forced, something that Forrest Gump, for example, managed to employ in a smoother way. Perhaps this was due to the latter’s use of humor to balance things out but Cavalcade did not employ it in any way. This was a very serious film, and such reverence to its own seriousness hurts it in the end. Lighting the mood a little bit would have made wonders to the film, especially as the decades went by.

Cavalcade won Best Picture, Director and Art Direction at the 1934 Academy Awards. However, it is one of the most forgettable films of Oscar history, which is totally understandable. It’s not a bad film, not by far; it’s interesting, curious in a way, and effective in some parts. But it is also very uninspired, especially in a year featuring very few remarkable films, especially A Farewell to Arms, She Done Him Wrong and I Am a Fugitive From a Chain Gang. The only truly outstanding part of the production that was rightfully recognized was its Art Direction, a great achievement by William S. Darling.