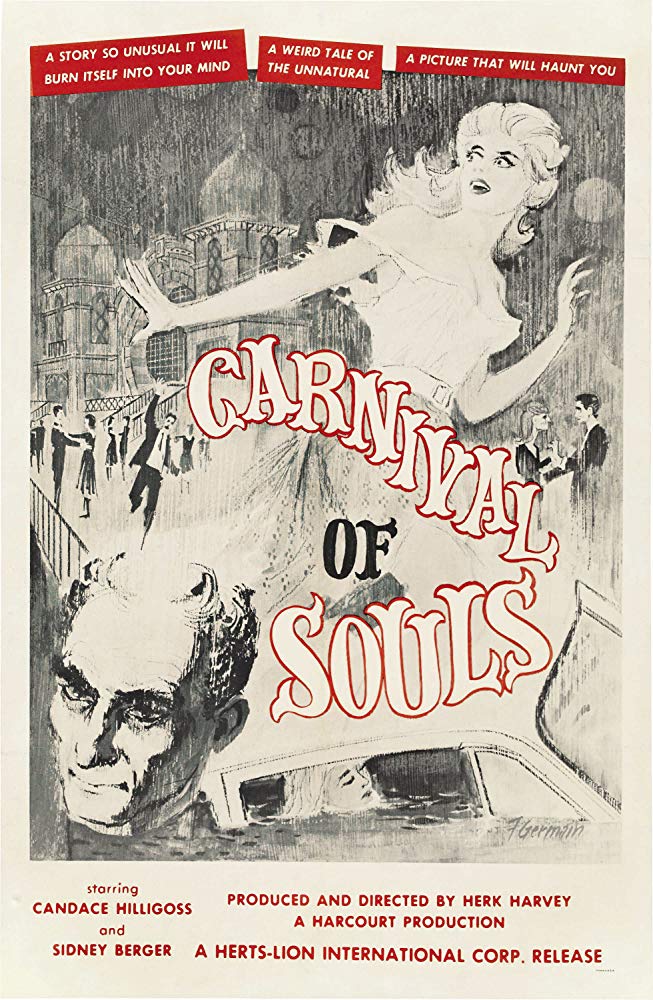 Carnival of Souls is a low budget, B-movie horror masterpiece. While it’s small and has almost been forgotten, it is still worth a shot.

During a car chase gone horribly wrong, Mary Henry (Hilligoss) is thrown of a bridge inside of a car driven by her friend. The car falls into the river and is carried by the stream. Mary manages to survive the accident and becomes traumatized by the event. She takes a job as a church organist in a new town, but while driving there at night, she starts seeing this mysterious figure on the road. When she gets to her new job, she still sees the frightening man everywhere she goes, and becomes increasingly paranoid when she realizes people are starting to completely ignore her.

Everything in Carnival of Souls screams low budget. It’s very easy to see this wasn’t a Hollywood film from the unknown and unspoiled cast, the poor elements (costume, sets), to the simple locations. But the lack of money to turn the film into more mainstream entertainment property is compensated by the creative direction and the constant feeling of uneasiness.

The strangeness of the entire plot of Carnival of Souls is felt from the start of the film. After the car falls into the river and Mary comes out of it totally disturbed, the director manages to infuse an intensely weird feeling. We sense there is something wrong going on, even if we cannot pinpoint exactly what it is. The soundtrack, all played in a pipe organ, helps increasing our feeling of paranoia and suspense. The music is chilling all the way and turns this journey into a very intriguing one.

All the actors behave accordingly, turning their characters into untrustworthy ones, making it even more difficult for the protagonist to feel really secure. Even the priest is strange. And although the entire cast is unknown, they all deliver great performances, helping to sell the horror of the story perfectly (which also includes the film’s director as the haunting man). They are all lead by the wonderful Hilligoss as Henry, who delivers a powerful performance as a woman who starts doubting her reality.

At times, Carnival of Souls reminds us of Psycho, a film released two years prior. Hilligoss physically resembles Janet Leigh as both of their characters embark on a road trip filled with strange elements surrounding them and they both face the mysteries of a small town community (in Psycho was just a motel, but you get the picture), where everyone seems to be hiding something.

The only downfall of Carnival of Souls is that the ending doesn’t shock anymore. We see it coming miles and miles ahead. But that is because we are used to these types of surprises as we grew as audiences. One could only imagine how shocking it would be back when the film was released.

At the end of the day, Carnival of Souls is a masterpiece of storytelling. The cinematography is great and the tension is felt during the entire run.