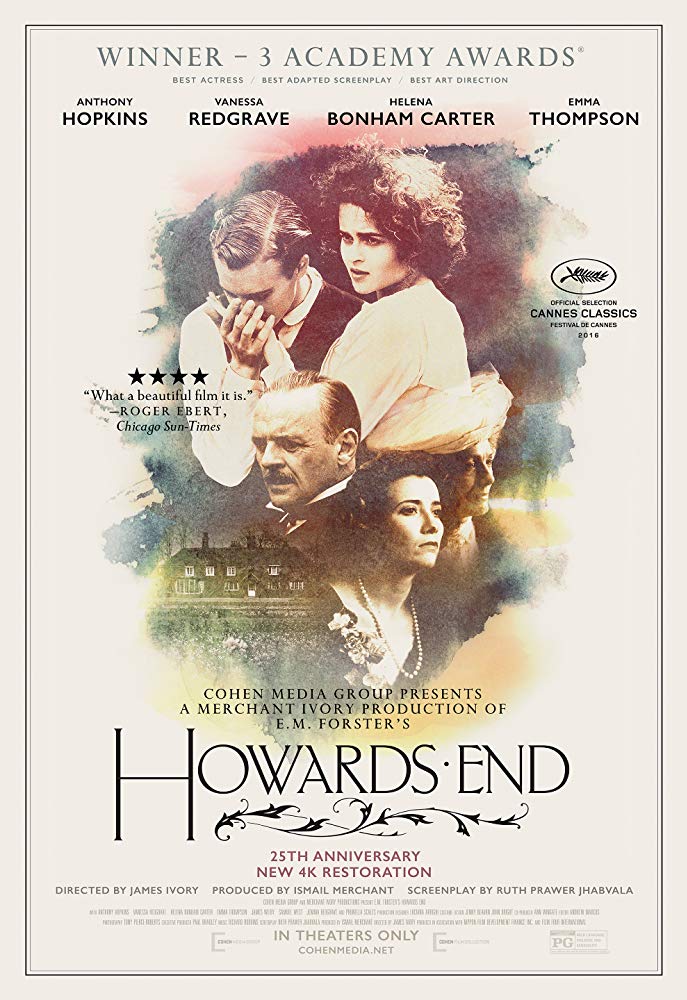 Howards End is the pinnacle of Merchant James Ivory's work. Do yourself a favor and give this a chance. You won’t regret it.

Howards End was the pinnacle of the Merchant Ivory 30-year old professional (and romantic) partnership. Their work consisted mainly of indie films until the masterpiece that is A Room With a View became a huge success in 1986. After that, they had a 10-year run of amazing films, all of them period pieces based on classic books and with the best English actors available. It’s a pretty great slate (A Room With a View, Maurice, Howards End and The Remains of the Day), with only a minor entry to the list (Mr. and Mrs. Bridges).

Howards End follows a woman named Helen Schlegel (Carter) who has a habit of taking other people’s umbrellas by mistake and does it again with Leonard (Samuel West) while rain pours down from the London sky. He follows her home and ends up becoming a protégé of her and her older sister Margaret Schlegel (Emma Thompson). The empty flat across the street from the Schlegels is occupied by the Wilcoxes during the celebration of the marriage o their older son Charles (James Wilby). The Wilcoxes and the Schlegels have an uncomfortable history together: a year before Helen shared a kiss with the other son, a situation that ended up embarrassing both households.

Margaret is very fond of the matriarch, Evie (Jemma Redgrave) and uses that opportunity to rekindle their friendship. They become best friends and Evie admires Margaret deeply. When she discovers that the Schlegels will have to leave their childhood home and have no place to go, she leaves her dearly countryside cottage, Howards End, to Margaret right before she passes away. When Henry Wilcox (Hopkins) discovers his late wife’s wish, he easily dismisses it and keeps the cottage in the family. But he ends up getting closer and closer to Margaret until he eventually marries her, causing a problem with his family and with Helen, who blames him for the misfortunes of her beloved Leonard.

E.M. Foster’s Howards End is pretty simple and incredibly complex at the same time, and it was translated perfectly for the screen with a script, by the master Jhabvala, that was nothing less than brilliant. What Jhabvala does so amazingly here is create three-dimensional characters that we feel are constantly transforming and evolving before our eyes. None of them are the same as they were in the beginning of the film. They learn with each other, they reflect their choices and change. It’s very rare to watch a film and see such rich and delicate character evolution as it happens here. It’s no easy feat and it is done to perfection here.

Evie and Margaret become close friends, and Evie admires Margaret’s youth and her strength and confidence to share her thoughts and fight for what she believes. Although they are quite different and from different generations, Margaret also admires Evie, and respects her opinions and her tradition. Their friendship is so beautiful and aspiring to watch because they don’t try to change each other – they don’t even want to do it (there’s a difference) – they treasure their differences deeply, and we see they are learning from each other, which is especially touching with Evie, who knows is not going to last a lot longer.

Margaret and her sister Helen are also quite different. They are both intellectuals in the turn-of-the-century England, where women were not allowed to being outspoken. Margaret is more balanced than Helen, and deals with the rules of society in a more comfortable way (her relationship with Evie certainly had a way with it) while Helen is fiery and combative. But Helen also evolves during the film, getting to finally understand that her impulsiveness can hurt others and most importantly, can hurt herself.

On the other end of the spectrum is Henry, a rich capitalist who built up a wall around himself and his emotions and lives strictly by the codes of conduct and honor imposed by English society. But Margaret’s love will tear some of those bricks down (but not all of them) allowing Henry to become a little warmer and understanding by the end.

Watching all of this unfold over the course of Howards End is a thing of beauty. Dramatically, the film works in such a powerful way, especially because it’s always subtle; the story goes by very smoothly, giving us the opportunity to appreciate all the intricacies in Foster’s story, complimented by the mastery of James Ivory’s direction.

Aesthetically, Howards End is gorgeous; costumes, makeup and photography are amazing to look at. But the production design and set decoration, in particular, are outstanding, especially if you take into consideration that the budget was of an indie film. They created such rich, filled with life sets, sometimes you catch yourself admiring them instead of paying attention to the story, and you have to rewind a bit. This is one of those few films where you can almost feel the texture of the walls and smell of those rooms. It’s that beautiful.

But of course, all of this would be pretty empty were it not for the actors portraying these characters. Hopkins as Henry Wilcox is the perfect English gentleman, Carter as Helen Schlegel brings her fiery personality to her character and all the supporting characters have great actors playing them. But the two standouts are Vanessa Redgrave and Emma Thompson as Ruth Wilcox and Margaret Schlegel respectively.

Redgrave has a very limited screen time, but she creates a full three-dimensional character with her Ruth. We care for her; we know exactly who she is and what she’s been through in her life. Thompson is totally understated as Margaret, who became her signature character; she highlights the traits that Thompson showed in all of her best performances: a huge heart, filled with warmth; and an emotional intelligence and stability that will help her navigate her problems.

As it happened with Sense and Sensibility’s Elinor and The Remains of the Day’s Miss Kenton, we know that Margaret is going to survive her ordeals. She’s going to keep going, even if she is devastated, even if any other character in her situation would crumble and fall in face of the same problems. We know she will endure, because of the strength Thompson gives her. That doesn’t mean she may not be totally destroyed on the inside – it just means that she will hold her own and face her problems with dignity. Watching Thompson act is fantastic, especially because she is not flashy at all. What an amazing actress she is.

Howards End may not look like a must watch film. Don’t let that fool you: do yourself a favor and give this a chance. You won’t regret it.

Woodstock: Three Days That Defined A Generation - A Justified Retelling

Maiden - A Successful Retelling and Not Much Else