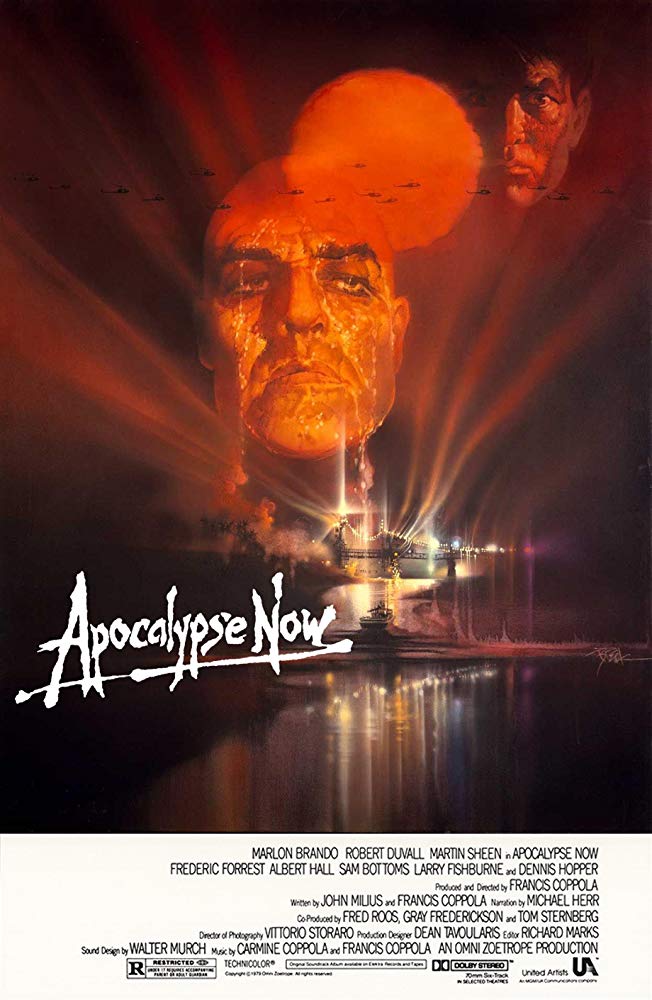 Apocalypse Now is a masterpiece and the perfect example of the best the 70’s films had to offer. Watch it or rewatch it as many times as you can!

During the Vietnam War, Captain Willard (Sheen) is asked to hunt down and kill Kurtz (Brando), a Colonel who had gone insane, murdering people and creating a remote kingdom in the jungle. He takes his crew down the river to find Kurtz’s hidden kingdom, and while doing so he also journeys inside his own insanity. When he finally finds Kurtz, the Colonel gives him the final push Willard needed to embrace the madness within.

Few movies were so emblematically problematic as Apocalypse Now. The behind the scenes stories are almost as better as the film itself. Sheen suffered a heart attack, drugs were being consumed in extraordinary measures, Brando was acting weirder than ever… Coppola is known for saying that Apocalypse Now is not about the Vietnam War: it is the Vietnam War itself. Watching the film we can sense it is actually quite true.

With so many problems behind the scenes, it’s surprising how incredible Apocalypse Now turned out. The war on Vietnam had already been covered in other strong films, especially the toll it took from soldiers, in films like Coming Home and The Deer Hunter. However, this film went further and deeper as a strong representation of what it meant to be in the conflict zone, in a way it was truly revolutionary. It moves back and forth from reality to fantasy-land but it always let us know exactly where we were as audiences would go from shock to heartbreak. The sum of these two aspects gives us a very unique glimpse of the physical and psychological difficulties that specific war placed on the soldiers who were there, to the point where some of them really lost their minds.

Another incredible element to behold in Apocalypse Now is how the journey towards madness increases over the course of the film, giving it very distinctive sectors during its run. It starts more realistic, showing us how hard it was to face the reality of the war. In that sense, two sequences are probably the standouts: the napalm on the beach in the morning scene and the Playmates performance.

The first sequence, in a way, connects very well to the moment we live in the world right now: people do unspeakable things because them have the power to, not caring what human cost comes with it. It has its own sense of absurdity in it, especially in the performance of Duvall as Lieutenant Colonel Bill Kilgore, mostly because his behavior is monstrous to the point where we don’t know were the line to normalcy ends and craziness starts. Meanwhile the Playmates sequence, on the other hand, is unspeakably sad; the way those women were objectified and used is heartbreaking, and their humanity makes it all even sadder, because they feel deeply sorry for those men loosing their minds in the war and they give themselves to ease their pain. It really is awful to watch all of that unfold.

The middle part of Apocalypse Now brings in the transition, when things become more unsettled. In the extended version, we get to see the new sequence with the French farmers, who seem to be living in their own phantasmagoric version of the world, and it doesn’t even feel like they are in the same decade as the rest of those men. In a way, it’s the perfect representation of the transitional period the Vietnam War was inserted in, with the innocence of the 50’s and even the romantic rebellion of the swinging 60’s being lost to the true horrors of the darker times that were coming at the end of the decade. The loss of innocence were inevitable and in the film the sequence also works as a portal to the last third, where Willard dives completely into the madness of war – and into his own.

When Willard arrives at Kurtz lair, the group of men is deeply broken by what they have seen, but the community doesn’t help easing their angst, on the contrary. Kurtz’s madness is terrifying and totally unsettling, until Willard finally let his restraints go and accept the madness within. It’s deeply disturbing, to say the least.

Everything in this journey to hell is fantastic to watch. Technically Apocalypse Now is a brilliant film and all the actors deliver their parts with a lot of commitment. The two standouts here were Duvall, fantastic as the surfer military and Brando who, as the film did, mixed the madness of real life with the madness of the part, feeding one from the other and creating a really unforgettable creation. We are completely uncomfortable with him in the film, just the way it should be. Amazing.

Apocalypse Now is a Coppola masterpiece. And it’s not even his only one.

First Look: Netflix's Living With Yourself