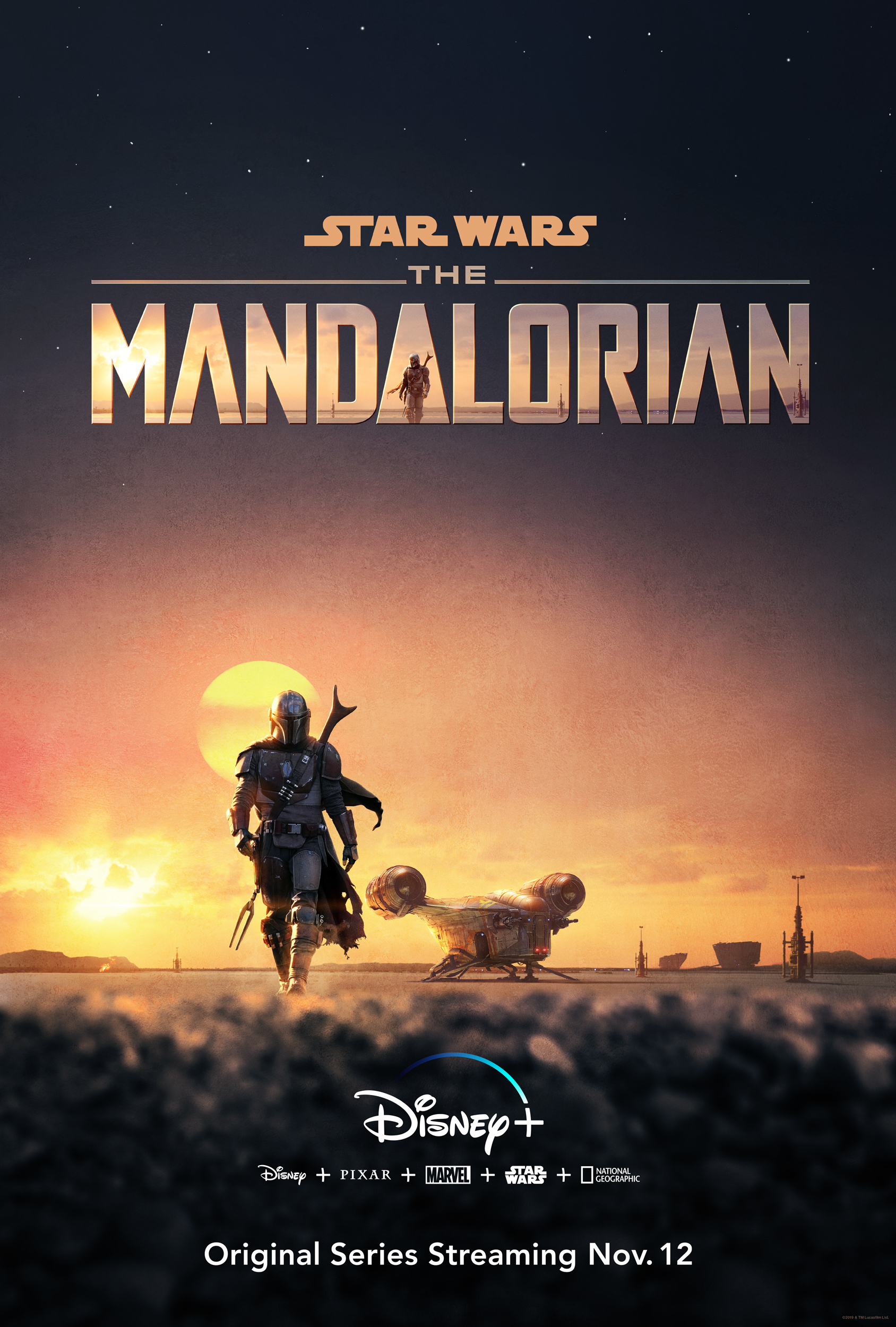 The Mandalorian may be flawed but it's more than entertaining and visually impressive enough to hold your attention, and is an interesting step into uncharted territory for prestige TV.

The Mandalorian is an important milestone in television history; not because it’s the first official live-action Star Wars series, but more because it marks the logical conclusion of the path that prestige television has been on for the past decade or two. It’s on its own exclusive streaming service (Disney+), has big-name actors and directors attached, and is completely driven by its expensive visual effects.

Inseparable from Star Wars itself, The Mandalorian is entirely hinged on lore established existing movies, books and shows. Despite the alleged end of the original main film series, Star Wars is pretty much culturally inescapable. So, in a time where merely whispering the title of one of the movies calls a death squad of Opinions™ to your door, it’s all the more interesting how much praise The Mandalorian has garnered since its debut. A lot of this is down to the fact that it contains pretty much everything that “Star Wars Fans” (whatever that means) wanted to see from it. We have a mysterious, capital-B Badass main character, cool fight choreography, subtle-enough artifacts of nostalgia, and stories that feel very distinct from the grand, polished look of the new films.

As much as it may be “dream” Star Wars content, this was still a TV series. So how was the scope and visual flare of the films reconciled with the restrictions of television? Well…this pretty much didn’t happen. Even the biggest prestige series follow certain conventions – they’re usually anchored in dialogue and reuse sets, characters, music and nowadays effects. With its enormous budget – a reported $15 million per episode – and an unexpectedly short average episode length, The Mandalorian mostly rejects this.

The series is chock full of action set pieces, huge sets and major characters that are visited, briefly explored, and then entirely discarded. It’s completely uncompromising in delivering an effects-driven spectacle. This is one of the most interesting revelations about the show, and one of the major elements that both elevates and diminishes its overall quality. The Mandalorian doesn’t feel like any prestige series – it exists in some strange territory between old-style ultra-serialized TV, but with millions of dollars thrown at it, and blockbuster film. The line between high-quality TV and film is increasingly being blurred, and this feels close to the natural endpoint of pushing that boundary.

The fragmented overall story makes it hard to talk about the season as a whole but it still features plenty of consistent elements throughout the series’ first 8 episodes. First off, it looks fantastic; it’s easy to see where the money went. The costumes and sets look like they’re straight out of the movies. Even with so much variety across the season, they’re all great. There are a few very convincing puppet characters, as well.

The effects for the most part were very impressive, especially for how prominent a role they played throughout the series. The series takes advantage of the possibilities they create, giving us some of the best and most visually interesting scenes of the season as a result: an AT-ST walker with its cockpit lit up in red, an action scene hanging off a huge Sandcrawler racing across a desert, and many more. Every once in a while the effects are noticeably sub-par – not bad, but enough to stand out against the surrounding quality. These moments often pop up in ways that make one question the reason behind including that sequence or shot. This is one of the times where the uncompromising attempt to put The Mandalorian on the same level as a blockbuster movie hurts it. It’s certainly not made with much pragmatism in mind.

Ludwig Göransson’s score is excellent. Each episode’s soundtrack – all released separately in another unconventional move for a series – smartly building on its core musical motifs to fit the tone and scenario of the week. It succeeds where other Star Wars-adjacent scores in the past have floundered, staying close to a John Williams-esque upbeat orchestral sound but also differentiating itself with its own unique style.

The number of established actors who make appearances, both in singular episodes and major recurring roles, go great lengths to push the series away from a fan-film feel, and their performances were generally good. It’s hard to say Pedro Pascal (The Mandalorian himself) has his acting ability fully used – he doesn’t talk much, he’s hidden behind a mask for about 99.9% of his screen time, and apparently it’s not even Pascal in the suit for a lot of it. Regardless, he still does a solid job with the material he’s given, providing a nice, steady core to the show. Gina Carano and Carl Weathers are both highlights as Cara Dune and Greef Karga respesctively, providing plenty of energy and humor. They both sell their characters really well; even Weathers’ wooden line delivery somehow works.

It is also worth mentioning that Werner Herzog’s performance as “The Client” (hopefully another series coming soon to Disney+). Despite limited screen time, he was arguably the best part of the whole series so far. Part of that is definitely the innate humor in the idea of a 77-year-old German auteur director in a Star Wars series, paired with his hilarious and widely reported obliviousness to the series’ nature or the blockbuster system it belongs to. However, even though we surely know more about Herzog’s character than he does, he sells the hell out of it, more than perhaps anyone else on the show. Herzog brings a gravity and legitimacy to his villainous part, even when saying completely ridiculous lines like “I have a camtono of beskar waiting for you upon delivery of the asset”, it’s hard to imagine other actors matching that kind of energy.

Most of this season’s scripts, written by showrunner Jon Favreau, are pretty unremarkable. The dialogue in particular is lackluster. This didn’t end up being too much of an issue though, since lengthy conversation scenes don’t turn up very often. The main character of The Mandalorian is defined by how reserved he is, and his only consistent companion is a baby, who obviously lacks much ability to hold a conversation. The series is very good with communicating visually – the best scenes are usually ones with no speaking at all.

The action scenes are also a consistent highlight, with the high point of the season being Chapter 3’s climactic shootout. The choreography is excellent and unexpectedly brutal (starting strong with a killer door in the premiere), and everything is on a refreshingly much smaller scale than the huge battles of the films.

A common point of concern before The Mandalorian started was the possible audience disconnect with a protagonist whose face is completely covered. This did not end up an issue – he’s somehow still compelling to watch, maybe because we can’t be sure of what he’s really thinking – but there are other things about the character which were frustrating. It often seems like he’s almost too skilled for the situations we find him in to be dangerous, which extinguishes any tension. This would be the case in most episodes.

The character is elaborated on in (kinda repetitive) flashbacks throughout the season, but it’s all pretty straightforward and still doesn’t give us much of a detailed idea of who he is. It also doesn’t feel like a defined story arc was completed from the first to last episode, and most of the plot threads outside the standalone episodes are left hanging by the end. Gaps left in this first season are excusable by saying that it’ll be explained in the future, but it still doesn’t excuse this season from not really working on its own. The story is far from over, but the most satisfying season finales make a point of tying most everything up, even temporarily, and showing how things will be different for the characters heading into next year; this didn’t happen here.

With the season’s 8 episodes split between five directors with different sensibilities and styles (although all fitting somewhat to the same formula), the quality of the individual episodes ranges pretty widely. Being a fan of The Clone Wars growing up, it was exciting to see Dave Filoni’s two directed episodes. However, Chapter 1 and 5 were the weakest by far, with grating side characters and clunky pacing. Where the other episodes know to keep everyone’s mouth shut and let the action and tension do the talking, Filoni’s episodes are filled with cringe-worthy exchanges that made them feel cheap.

On the other hand, the other directors for the most part all bring something interesting to the table. The best episode arguably was Deborah Chow’s Chapter 3, which took the series’ visual storytelling to its high point and delivered an intense and dramatic episode that helped set the series into motion. It was also the first time it really felt like The Mandalorian was on the back foot, completely outmatched, which is the key to the show’s tension working at all.

Another favorite was Chapter 6, the admittedly pretty random jailbreak episode directed and partially written by Rick Famuyiwa. Not only did it feature some decent writing, it also boasted a great supporting cast. Famuyiwa effectively balances the feeling of a slow spiral out of control that was compelling in episode 3 with some awesome showcases of The Mandalorian’s strength and skill, which are always very fun to watch. The way the episode transforms from a heist to something resembling a slasher was very entertaining and equally cathartic.

Overall, The Mandalorian certainly has a lot room to improve, but is still an exciting step forward for tent pole TV entertainment, particularly under the iron and often blandly uncreative fist of Disney. It’s unclear whether the series is worth a recommendation if it existed in a vacuum, but within the looming context of Star Wars and the path that TV is on, it’s pretty interesting, and quite entertaining.

Hopefully they can get David Lynch in a minor recurring role next season.