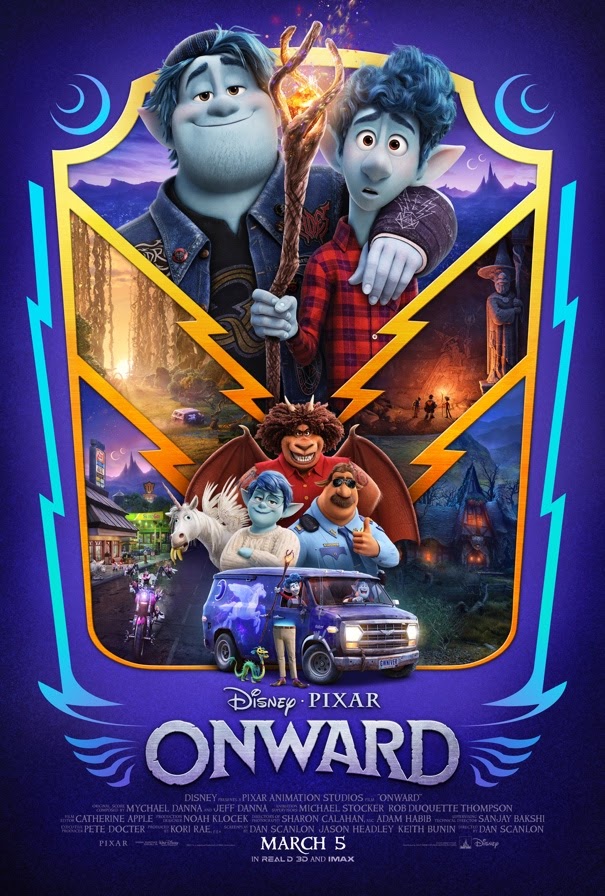 Using Joseph Campbell’s “The Hero’s Journey” structure to communicate themes of family, tradition, and brotherhood, Onward casts a magical spell that transports you into a world full of emotion, humor, and most importantly heart.

Ever since 2017’s Coco, Pixar has been on a roll with Incredibles 2, Toy Story 4, and now Onward, their latest original story about two brothers on a quest to see their dad one last time. The film follows Ian (Holland), a shy anxiety-ridden elf and his older brother Barley (Pratt), a history nerd obsessed with the old magical traditions and who is, according to his mom Laurel (Louis-Dreyfus), on the “world’s longest gap year.” On Ian’s 16th birthday, he receives a magical staff as a gift from his late dad that has to power to conjure him back for a single day. The spell doesn’t fully work and the boys are left with only their dad’s conscious pants and shoes, entering Weekend at Bernie’s mode in order to recover the stone that will bring back his other half.

Set in a fantasy world currently devoid of magic due to the evolution of technology and society, Onward harkens back to a more traditional world filled with wizardry and wonder. Ian may be a blue elf from a completely different world, but his problems would befit that of most high-schoolers today. He has trouble standing up for himself, socializing with peers, and perhaps in the most relatable for fresh 16-year-olds – first experiencing how to merge onto highway traffic. Learning to get out of your comfort zone is something that we all must do in order to grow, and watching Ian’s transformation from anxious kid to confident hero felt natural and relatable. Speaking of relatability, this film hit pretty close to home. Losing my father to cancer at 16, it was a confusing time as me and my brother each dealt with it in our own ways, becoming closer as a result. Ian and Barley go through a similar experience in Onward. The quest they go on becomes a channel for the brothers to subconsciously express their feelings to one another, crescendoing into a moment of revelation and empathy that will surely leave audiences swelling with emotion.

With the film getting off to a slow start, Scanlan should have used a few more minutes to set up the characters (especially Barley) more because although they were relatable, they come off feeling a little one-note. However, this dissatisfaction became completely erased as soon as the brothers began their quest and entered the Manticore Tavern, a traditional quest related hot-spot. From here, the story and the visual comedy ramps up and is highlighted by a hilarious particular character design. Pixar really knocked it out of the park with Onward. Onward serves as an original film based on Scanlan’s own experiences that showcases what magic-realism in animation can really accomplish. The emotional connections that the film establishes between characters and audience are typical fare for Pixar movie by now, however, the story beats here are some of the most fleshed-out and emotionally charged since Inside Out.

Critically speaking, the film may be destined to slide to the bottom-tier of Pixar’s amazing filmography (it’s already in my top ten), but give it a chance and there will be something that people of all ages can take away and emphasize with.

The Way Back - A Familiar Yet Memorable Path (Early Review)