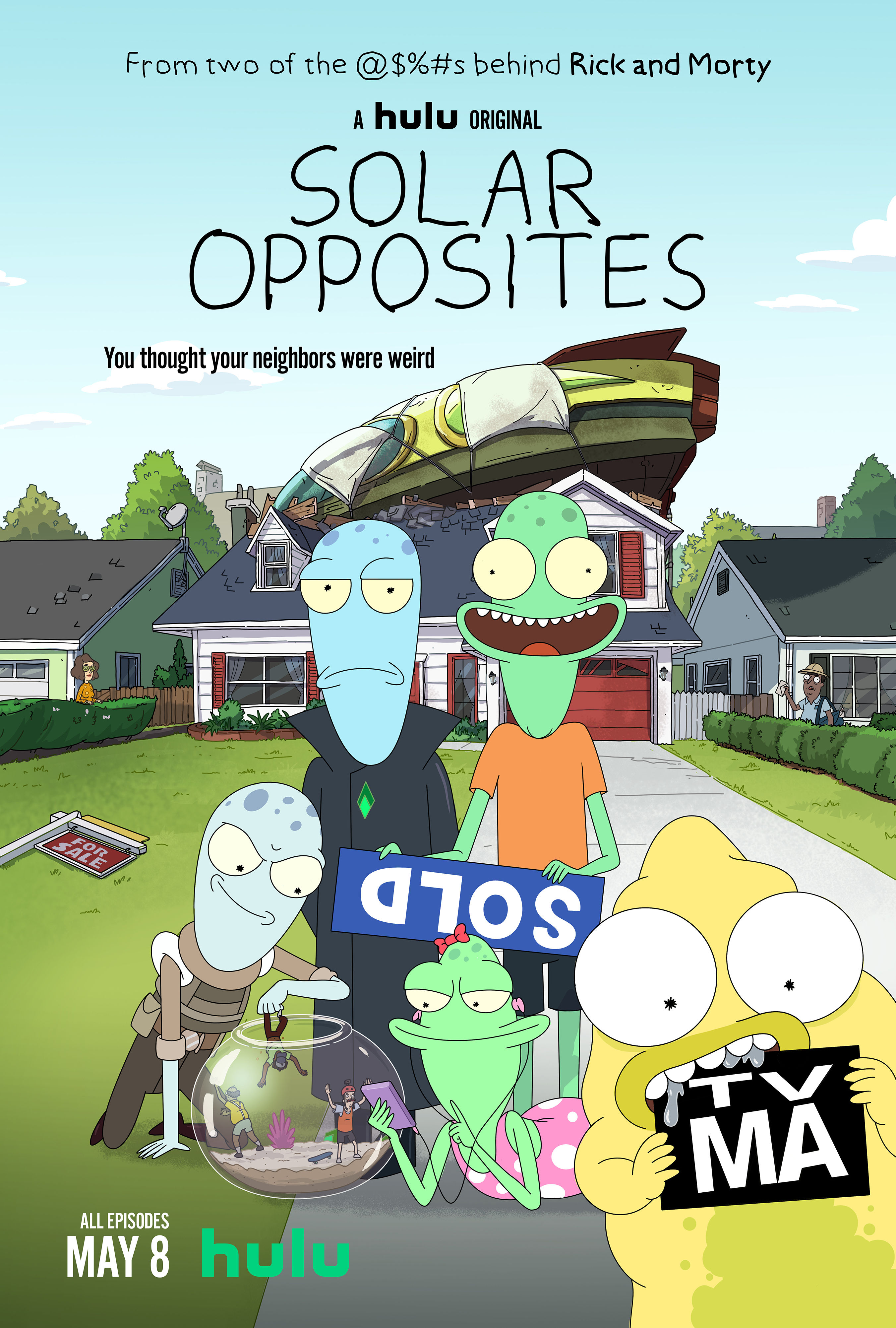 Solar Opposites has potential but it's humor is hit and miss and the formula is too familiar to make it anything special.

Hulu’s latest adult animated series created by Justin Roiland, one of the minds behind Rick and Morty, Solar Opposites, offers the streaming service the chance to compete with the likes of Netflix’s Bojack Horseman and The Midnight Gospel. Just looking at the poster, anyone could easily see the comparisons to Rick and Morty as the animation style is exactly the same and one of the characters is voiced by Roiland who also voices both Rick and Morty in Rick and Morty.

One of the biggest obstacles facing Solar Opposites clearly is the inevitable comparisons to Rick and Morty, one of the single biggest success stories of the 2010’s. Rick and Morty has influenced countless other series to not just copy the Family Guy formula but rather make compelling characters and interesting concepts. Adult animated series such as Bojack Horseman, Primal, The Midnight Gospel, and Undone have all come to the table with big ideas and brilliant storytelling. Unfortunately in the case of this series, Solar Opposites never seemed to find its footing until near the end of this first season. There’s certainly a lot of creativity on display and as it had its moments. While the series is watchable, its potential is weighed down by its familiarity factor.

The whole “aliens come to Earth with the plan to take it over or leave and try to blend in with Earth and their customs” is a really tired premise that has been tackled countless times before. With Solar Opposites, the typical sitcom family here is on display. Korvo (Roiland) and Terry (Thomas Middleditch), are two aliens who are both men who happen to have no sexual desires for each other and bicker in the same way as the typical husband and wife troupes in series with a nuclear family. The daughter and son, Yumyulack (Sean Giambrone) and Jesse (Mary Mack) here bicker just like Bart and Lisa, just a little darker. While the character dynamics are familiar, the series also never makes any interesting commentary on these troupes. They could have really been able to dissect the cliches on display here and play on them but they merely flirt with these ideas at times, rather choosing silliness than saying anything insightful.

Meanwhile, one of Solar Opposites’ major subplots involves Yumyulack, a refreshing character in his own right, and characters trying to escape a wall and how they survived with the rations they got, eventually creating their own totalitarian government. A later episode focusing on this subplot was such a fascinating episode that in developing better characters, themes, emotion, humor and investment in its 22 minute running time than many of the episodes prior. This episode unfortunately proved to be an exception seeing that as a whole, the creators of this series had the ability to make something really special like that episode but as a whole, simply made a series that for the most part was by the numbers.

As the first season ended with a cliffhanger, maybe season two will see the creators decide to make something more interesting and unique after laying the groundwork with this season. Solar Opposites may have had some chuckle worthy moments at times but it also had some trying too hard, really cringe-inducing moments at others. Overall, it may be a series that doesn’t quite know what it wants to be just yet but at the end of the day, it is still one worth keeping an eye on as it hopefully moves forward and improves over the coming season.