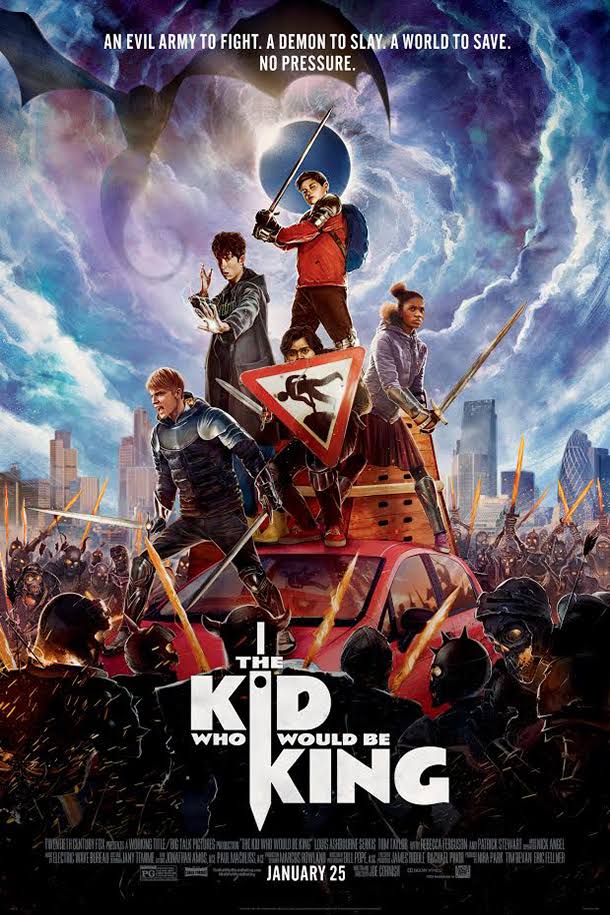 Edgar Wright tweeted this on January 7th: “It’s witty and inventive and has a dash of “Time Bandits” irreverence. You will enjoy.” This is the first time I’ve disagreed with you Edgar….

Synopsis: Old school magic meets the modern world in the epic adventure THE KID WHO WOULD BE KING. Alex thinks he’s just another nobody, until he stumbles upon the mythical Sword in the Stone, Excalibur. Now, he must unite his friends and enemies into a band of knights and, together with the legendary wizard Merlin, take on the wicked enchantress Morgana. With the future at stake, Alex must become the great leader he never dreamed he could be. (20th Century Fox)

The Kid Who Would Be King is a modern retelling of the tales of King Arthur, and its not very good. While the occasional offbeat joke will land, and some of the visual comedy works, but the film is heavily bogged down by a terrible script, a bloated run time, cliché after cliché and some of the worst child acting put to screen in years.

However, the biggest compliment that could be given to the film is that it is never boring. Even though its various and numerous repetitious sequences, and a frankly unnecessary third act (which honestly feels more like a fourth act), the film is well shot, generally well directed, and consistently interesting. It has a few neat concepts which it explores and the overall idea of modernizing King Arthur with Brexit era Britain as the new backdrop for these tales is one that leads to a ton of neat juxtaposition and some really entertaining moments.

In addition to this, it is worth mentioning the one absolute standout aspect of the film, that being the Angus Imrie/Patrick Stewart joint performance as Merlin, as well as the excellent writing dedicated to his character. Imrie is constantly hilarious whenever on screen, with a kind of indescribable magnetism to his performance. Each of his jokes and moments land, even the more serious ones, and as always, it’s a pleasure to watch Patrick Stewart do anything on screen. Despite Stewart’s fun performance, however, he is rather underused, and seemingly randomly injected into the story.

That’s about where the praise ends as the film falls flat in almost every regard. As mentioned, the writing was abysmal. Nearly every line of dialogue was laced with platitudes about friendship and tons of clichés. Even though it’s a kids movie, the demographic is not an excuse for lazy, over-expositional, and sloppy writing. A screenplay often makes or breaks a picture, and here it leans more towards breaking it. The writing for Dean Chaumoo’s character “Bedders” , the so-called “comic relief” especially stands out. Each line is a complaint or a question. Understandably a film must have moments like this to help explain the high fantasy aspects of the plot. He’s an audience insert, which is needed, but when it all comes from one character, he’s simply annoying the audience.

This character is made all the worse by the actor. Chaumoo delivered every line he was given in the same monotone and whiny manor, but it’s hard to blame a child actor for this kind of performance when there was a director present who could have simply asked for a little more variation.

Overall, while fun and light-hearted, The Kid Who Would Be King falls short of it’s heroic efforts, turning in a sloppy and disappointing final product and not worth your time.