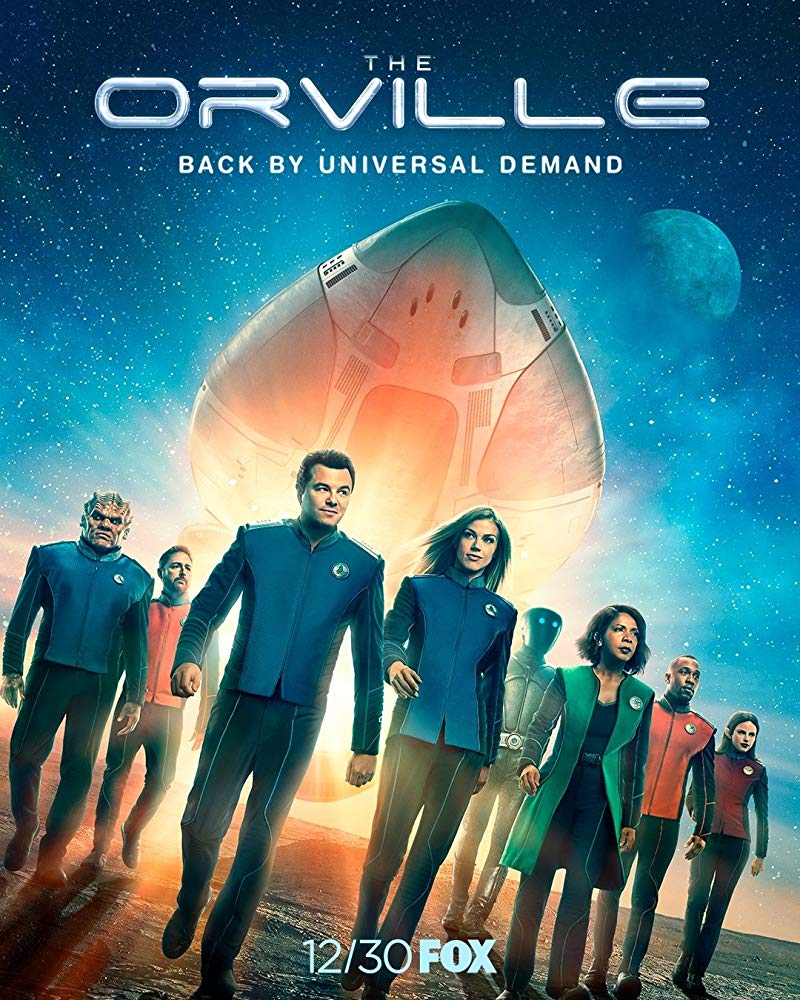 For our review of the last episode of The Orville, click here.

Synopsis: The crew must contend with the disastrous fallout from Kelly’s decision. (IMDB)

In a race against time, the crew of the Orville race to undo the dramatic fallout from the decision that Kelly made at the end of last week’s episode where she denied a second date with Ed.

As a result of her decision, the timeline has changed drastically – the Kaylons have won after infiltrating The Orville, occupied by a completely different crew, and thus wiping out over half of the universe’s population and forcing those left alive to live in constant fear of death and destruction. In this new timeline, we first encounter Ed and Gordon who narrowly escape a Kaylon attack only to be captured by scavengers who they discover to be Kelly who has managed to track down each main member of the Orville in hopes that she could undo the damage she’s caused.

As the crew begins to brainstorm about possible options, they realize the error in calculation for the memory wipe that Dr. Finn conducted on Kelly. This leads the group to travel to a resistance outpost that contains the missing chemical needed for the memory wipe before attempting to send Dr. Finn back in time to administer it to the Kelly from the past. The outpost is lead by Alara who provides enough cover for the crew to escape from an ensuing Kaylon attack.

Continuing on their time odyssey, the next component necessary is the Orville itself which houses Isaac’s plans for the machine housing the time crystal which Lamar can build but the only hang up is that the ship lies at the bottom of the Pacific Ocean after being nearly destroyed once the Kaylons began their rule. At the risk of desperation, they locate and board the ship at the bottom of the sea only to find Bortus surviving in extreme conditions after choosing to remain so that all of the escape pods could be used.

Finally, with the entire crew together again, they seek to correct Kelly’s mistake by sending Dr. Finn back to the morning after Kelly and Ed’s first date before she has time to refuse a second in order to administer the correct dosage of memory wipe and correcting the timeline back to what we have witnessed this season. Dr. Finn manages to escape back in time just before the ship explodes due to all of the power being pulled to power the time crystal but in the end all is made right in the world and Kelly does indeed say yes to a second date with Ed.

What was most enjoyable about The Road Not Taken was its quick pace and deliberate decision to not rest long enough to attempt to explain why some of the plot points took the story where it did. Normally, this would be cause for concern inevitably leading to an episode severely lacking in structure, however, it was refreshing to see the show lean in to more of the fun and entertaining aspects that made this show watchable in the first place. It was a nice change of pace from its prior more seriously focused episodes during this season which resulted in it just being 48 minutes of pure fun. It was a nice touch to have Alara return, even if only for a brief moment. If you had read anything behind the scenes with The Orville, it appeared that she might not have left the show on the best terms but this small moment helped slightly ease some of that tension.

While this episode was never in any danger of being serious, it somehow was able to payoff all of the previous episodes from this season regarding the Kaylon threat as well as Ed and Kelly’s history while still being able to deliver entertainment translating into an easy watch. It’s unclear what lies in store for the crew of The Orville or even what could happen to the show in general but hopefully it’s given another season and opportunity to continue to grow. Only time will tell.