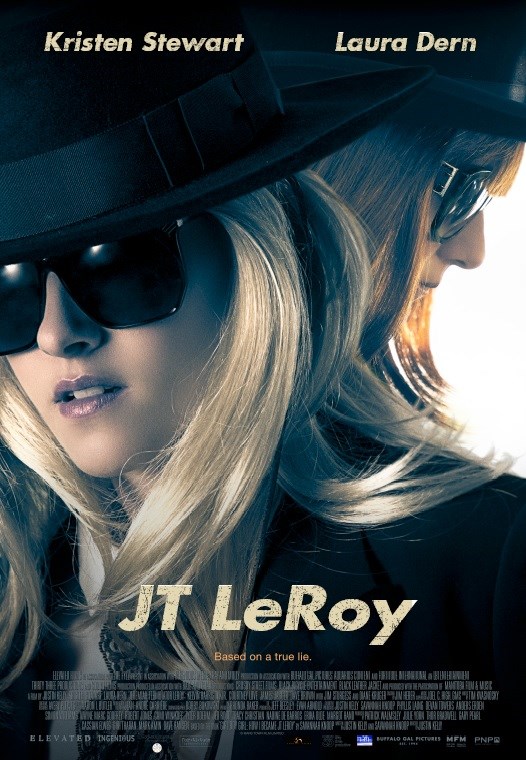 JT LeRoy is a movie that screams that it could be so much better from the opening moments alone.

For a film that opens with an Oscar Wilde quote, then proceeds to name check him midway through, JT LeRoy is a film that’s vulgarly about nothing. That’s not to say this film is unwatchable, or even unpleasant. This is such a substantial and fascinating story, and yet, Kelly is without a single new or interesting way to tell this narrative. There could have been so many ways to talk about a story that’s about artistic persona, gender expression, and systems of abuse. This film only makes vague, shallow comments on them.

If you aren’t aware of the JT LeRoy story, this film isn’t really any better than its corresponding Wikipedia article. Based on the memoir by Samantha Knoop entitled Girl Boy Girl: How I Became JT LeRoy, this film tells the story of Samantha (Stewart) and how she becomes entangled with Laura Albert (Dern), a writer who creates the so-called “avatar” of JT LeRoy. We follow the two as Samantha is asked to play this avatar of Albert’s. Then there is the unexpected aftermath after JT LeRoy becomes a cult figure. The film veres uncomfortably around different plot strands and ideas, but eventually settles on following Samantha playing LeRoy, and how she slowly gets manipulated by a director named Eva (Kruger) to sell her film rights for the film version of Sarah, JT’s first book.

The most consistently enjoyable part about the film is easily Stewart’s performance, where she embodies Samantha with wonderful humanity and slight discomfort. Her face is the perfect slate of passive aggression, or subtle worry, making her ideal for a role like this. On the other hand, Dern is completely over the top, unsubtle, and uncomfortable. Playing the manic Laura Albert without a human moment or feature, she becomes a caricature of unpleasantness, villainizing a real life person who probably just benefited from the real life controversy. The film also features other assorted characters, none of which who make much of an impact aside from Kruger’s Eva, which is a portrayal of manipulation that is genuine and palpable.

The problem here is the perspective. This story within the same framework could be a fantastic and fascinating look at gender expression, and maybe even how this Samatha’s consistent portray of JT lead Samantha to use they/their pronouns in real life. This film also could be exploring the trauma that Laura Albert hints at and occasional talks about, opposed to the standard biopic treatment of a less than standard story. This is supposed to be the entire ordeal from Samantha’s perspective, but there’s little in terms of original approach anywhere throughout this film.

Worst of all, this film continues to lionize a controversy, which didn’t even deserve the original attention. Laura Albert was never a good writer, just a unique one, but this film treats JT LeRoy’s prose as the word of god, as if somehow that justifies the entire ordeal. In one scene, a young man with long hair comes up to JT and tells JT how much the book Sarah means to the him.

It’s just one of many ways that this film doesn’t get anything about the story of JT LeRoy, while still celebrating the entire situation.