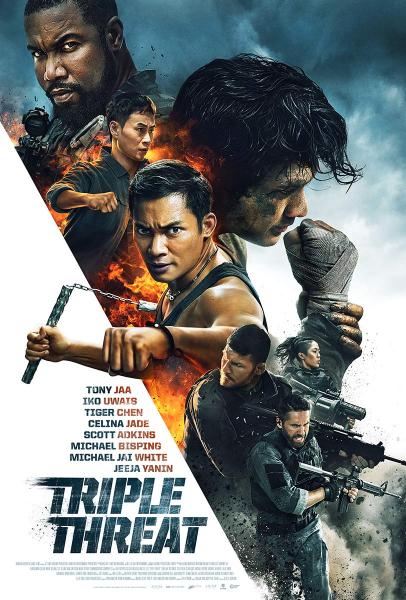 Triple Threat is a mindless action movie with some decent action though also an overabundance of cheese, little to no characters to speak of, and even less of a plot.

At first glance, many martial art fans will notice the stacked cast in Triple Threat. This will inevitably be a major draw for some audiences and for many, it will be enough, but this film seemed to coast on how big of a draw it believed they would be by wasting them for the most part. In general, a plot is clearly not the highest priority for these types of films (seeing that most will be more interested in the action) so it shouldn’t come as much of a surprise that this film has little to no plot whatsoever. While some may be left wanting more, this film manages to somewhat get away with this. Of course it’s all mindless, however, there wasn’t nearly enough of it as the film awkwardly try to force its lack of plot between its few unbelievable (good and bad) action sequences.

The plot of Triple Threat isn’t worth going into in too much detail but it saw rival teams consisting of a group of mercenaries named Jaka (Uwais), Payu (Jaa), and Long Fei (Chen) taking on a group of professional assassins named Collins (Scott Adkins), Devereaux (Michael Jai White), and Joey (Michael Bisping) with a philanthropist daughter of a deceased billionaire real-estate mogul named Xian (Celina Jade) somehow caught in the middle. In trying to reconcile all of its moving parts, the film as a whole felt like a mess that never seemed to ever get going and the pacing was all over the place. As a result, this made the film dull to watch and it became easy to not care about the story or the characters which only made it all feel empty thus lessening any intended impact (no pun intended).

The gratuitously bloody action was easily the best part of the film thanks to some great camerawork and choreography, however, there wasn’t nearly enough of it. Again, the story arguably didn’t allow for more of it but could easily have been more streamlined in order to make it all work. The film may not feature an award-winning script by any means but it certainly could have done without bouts of cheesy dialog. With an international cast and story, expect a few different languages throughout the film. For those who still care what the characters were saying, the film’s lack of subtitles will unsettle some (though it doesn’t really matter at the end of the day). Certain characters would also alternate different languages with every line which was also kind of annoying.

The acting was okay for the most part but it was their actions that spoke much louder. The dialog was mediocre to bad and the story was a mess, however, the film still managed to be kind of entertaining to watch in spite of all of that. The great chemistry between Uwais, Jaa, and Chen as Jaka, Payu, and Long Fei respectively made them fun to watch while the others, such as Adkins, White, and Bisping as Collins, Devereaux, and Joey respectively were just dull with their cliche tough guy dialog.

Ultimately, fans of martial arts films and/or those looking for a mindless watch will find plenty to enjoy with Triple Threat but those expecting a little more out of their actions films may be disappointed.

Coming Soon to keithlovesmovies (Week of May 29th)