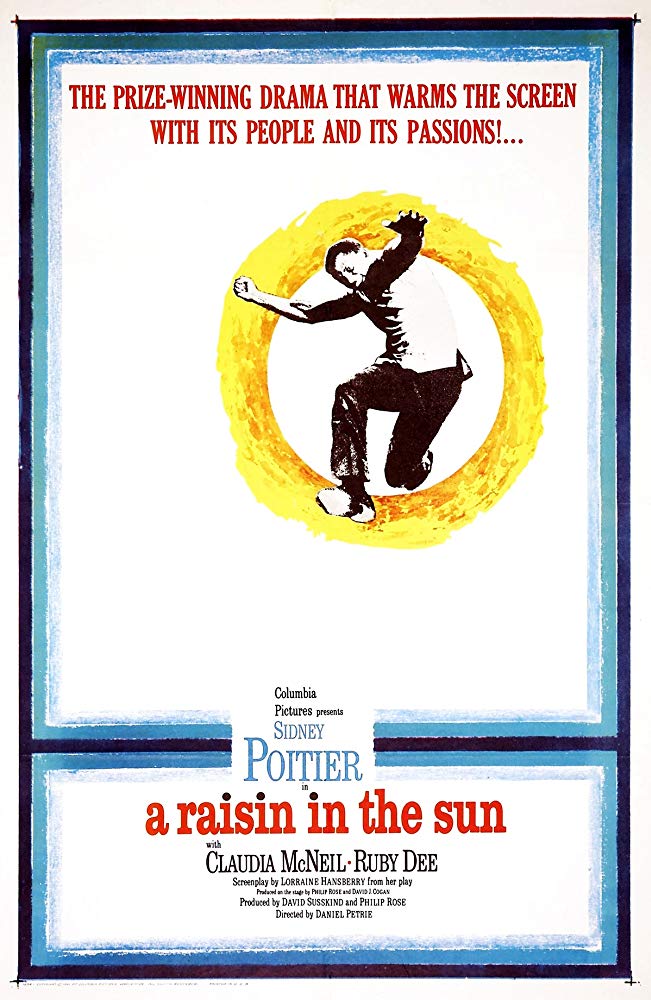 A Raisin in the Sun is a timeless tale of the troubles and sorrows of a poor family in Chicago.

Three generations of the Younger family lives in a cramped one-bedroom apartment in Chicago. Their lives are not easy; they struggle to make ends-meet while dreaming of a better future. Walter (Poitier) is a chauffer. He hates his subservient job and wants to become an entrepreneur. Ruth (Dee), his wife, wishes to be more than a housewife and most importantly, she longs for a life away of the old building they current live.

Lena (McNeil), the matriarch, wants a house with a garden and to see her children succeed. Her best hopes for that comes from her younger daughter Beneatha (Diana Sands), who’s studying to become a doctor. Lena also has high hopes for Travis (Steven Perry), Walter and Ruth’s young child, whom Lean spoils. The hopes and dreams of the family are tested when Lena receives an insurance check for 10,000 dollars after the death of her husband. She wants to buy a house for the family, but Walter has his own plans with the best way to invest the money. And his decisions will affect the entire household.

A Raisin in the Sun is based on Lorraine Hansberry’s play that debuted on Broadway in 1959. It was the first Broadway play by an African American author, and also the first Broadway play directed by an African American. The film version came two years later, keeping the original cast intact, and their familiarity with each other is felt right from the start; these players are very comfortable in their characters’ shoes. That helps tremendously the only real setback the film has: with almost all the scenes happening inside the family’s one-bedroom apartment, it’s impossible not to feel stagy in a lot of times. It does, and it bothers a bit, but the cast and director Daniel Petrie’s expertise in moving the camera around and working the angles and cuts help soften the problem. Thankfully, there’s a whole lot more here to be considered.

Films based on plays are a really tricky ordeal: a lot of them have aged pretty badly. The confinements of the narrative, the performances, even the subject matter screams old. Not A Raisin in the Sun. This film is still impeccable and incredibly moving. It has maintained it’s huge quality because the troubles and sorrows the Younger family faces are timeless: Walter feels entitled to the cash his mother is receiving. He wants to succeed, but he also wants to do it the easiest way possible. Ruth wants a better house for her family, where she doesn’t feel so comprised and cluttered. She also doesn’t know if she wants to keep the child she’s carrying, since her disappointment with Walter is increasing by the minute. If he can’t see reality before his own eyes, how is he going to take care of his family?

Beneatha wants to be a doctor, but also wants to express herself in artistic ways. She’s exploring her possibilities. Lena just wants to honor her late husband and gives her children and grandchildren a better life. Mostly, she wants to take her family out of that small apartment with an expensive rent and gives them a place they can finally settle and call home. These are all themes we are still facing and discussing today, which makes the movie as relevant now as it was when it came out.

The cast, all very familiarized with their parts, give it all to the story. McNeil gives her Lena a palpable sense of dignity, and the way she spoils her children (which makes her seem weak) while also maintaining her place as the matriarch and leader of the family is remarkable; Sands is great as the daughter that sees her dream shattered by her brother’s ambition is touching. But Poitier and Dee are the two standouts here.

This is one of the best performances of Poitier’s career hands down. He is heartbreaking as Walter. He manages to make him extremely hateful in some points and also pretty sad and miserable in others. It’s amazing. And Ruby Dee is probably the quiet strength of the film: her reactions, the way she expresses so much without saying anything makes us fix our eyes on her not to loose anything she’s giving us. The most impressive part of it all is that, although the cast performed these characters in the theater, they do not overdo it. They stepped back and started it all over, modulating their performances for the different medium.

A Raisin in the Sun deserves all the praise it gets. It’s amazing.

Inside Out 2019: Scream, Queen! My Nightmare on Elm Street Review