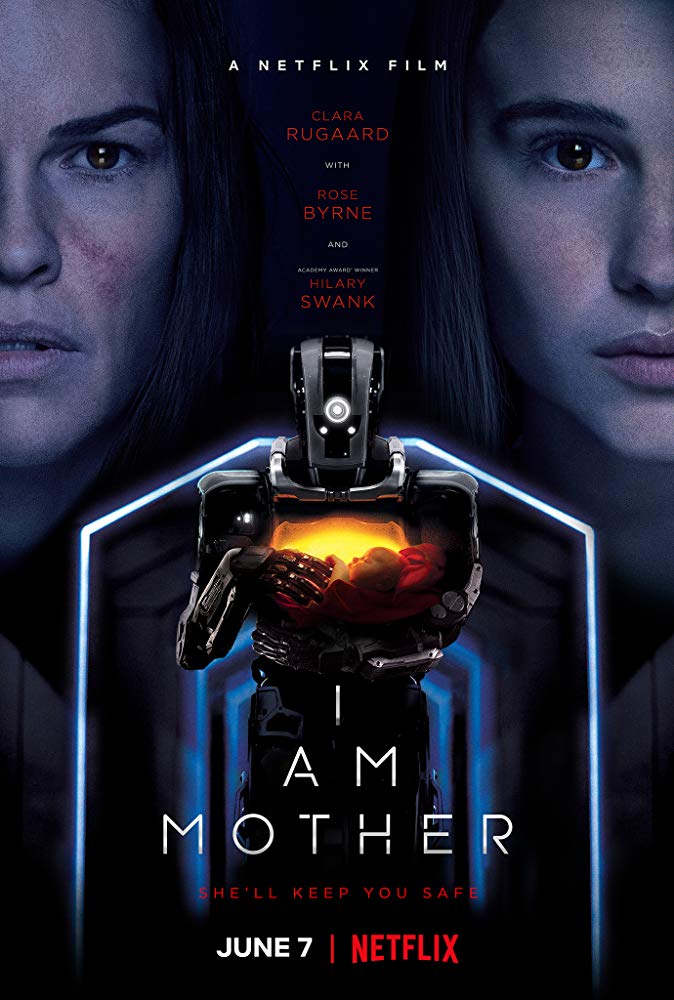 I Am Mother is a great little sci-fi indie film that manages to pull off so much visually but eventually succumbs to its arguably overambitious plot despite superb performances.

While watching I Am Mother, it is easy to forget that this is not a studio film as it will have you convinced otherwise which is only a testament to the level of imagination behind the camera. If anything, this film would be best described as a hybrid of Ex Machina and 10 Cloverfield Lane with a few other familiar sci-fi elements sprinkled in along the way. So this film may not be as revolutionary a film as the ones previously mentioned and nothing for the most part should come as that much of a surprise but in the end, it was still a compelling story that admittedly took a little while to get going though it got better once it did get going. Ultimately, this film is best going into blind so under no circumstances should anyone watch the trailer as it gives most of the film away (I realize that this sounds hypocritical since that very trailer is above).

The story here took place in some sort of post-apocalyptic world following a mass extinction event which would force the remaining humanity underground. Humanity’s only hope was a droid named Mother (Byrne) whose task was to repopulate the earth. Over her duties she would share a bond with a teenage girl known as Daughter (Rugaard) for whom she had raised since she was a baby. Both Mother and Daughter lived a sheltered (no pun intended) life underground under the pretense that it was too dangerous for Daughter to be outside. This was all she knew about outside and she never questioned Mother. However, this would start to change as she got older as evidence that questioned what she thought she knew was mounting.

That middle part of the film was arguably on the slow side but a major tipping point for Daughter (and the film) was the arrival of a mysterious woman from outside their underground bunker, named Woman (Swank). Her mere existence went a long way in perhaps disproving Mother’s account of the circumstances of Daughter’s upbringing. However, this had to be weighed against the fact that we knew next to nothing about Woman. With this new perspective, it became more and more clear how sheltered and naive Daughter was and that Woman may be telling the truth. From there, I Am Mother would take a suspenseful turn as the truth began to surface. While this was thrilling to watch, it would be tempered as it would eventually crumble over its overambitious ending that couldn’t quite resonate.

Despite this, the film was quite something to behold on a technical level. Its prowess was probably the best thing about it with. From the beautiful set designs, to the beautiful cinematography, and the imaginative special effects that utilize a seamless combination of CGI and practical effects, I Am Mother looks like a studio film but it wasn’t. Mother may be a intricately-detailed droid but it’s hard to wrap your mind around the fact that she is a man in a costume (Luke Hawker). Once the story took the characters above ground, the film was just as beautiful. It was just a shame that we couldn’t spend more time there.

These kinds of films live or die on its performances but luckily, they were superb across the board. Rugaard was great as the innocent, free-spirited Daughter. Though the film would put her through the ringer, she was certainly up to the task. Swank’s Woman was an arguably thin character and a different role than what we are used to seeing from her, acting more as a plot device than an actual character, however, she was still very powerful in the little time she had on screen. Although Byrne may have only provided her voice for Mother, she managed to find the right balance in her performance which was equal parts nurturing and sinister (and perhaps joining the ranks of other notorious sci-fi AIs).

At the end of the day, it’s always nice to see original concepts find success. Out of all the Netflix original films, be sure to check this one out.