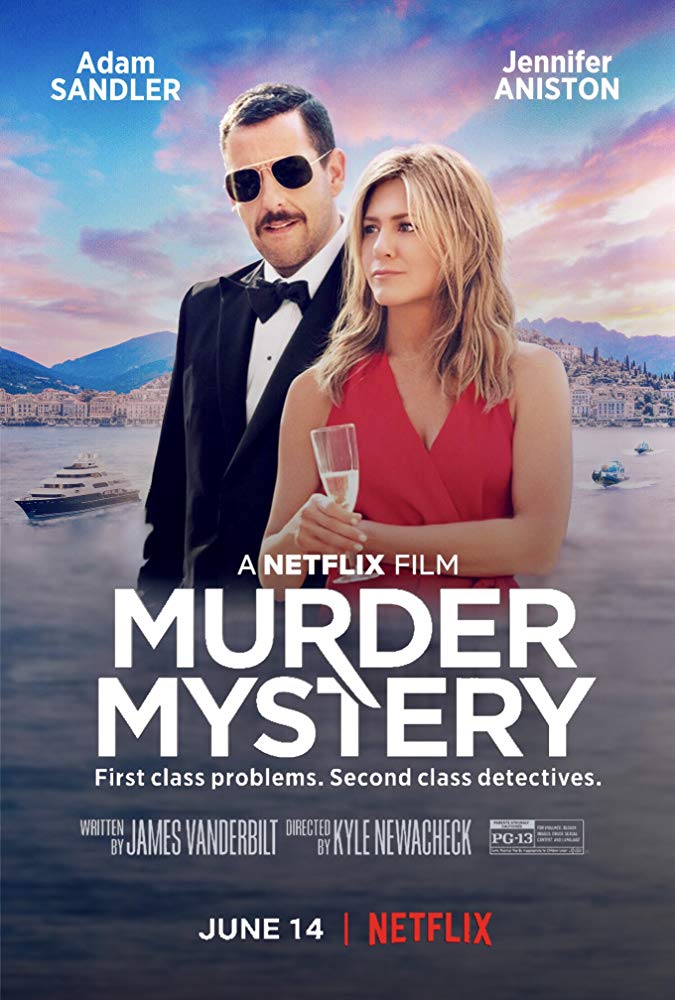 Murder Mystery is not an awful watch, in fact, it is best experienced as background noise while doing something else because it offers just as much entertainment being locked into it from start to finish as when checking in on it while engaged in another smaller activity.

As part of the four movie deal signed by Happy Madison, Adam Sandler’s production company, Murder Mystery manages to be a decent background watch affair that emphasizes fun over substance.

It feels like other critics with higher pay grades have failed to figure out when attempting to review an Adam Sandler comedy is that Sandler has made a career off of making movies based on what he enjoys. There’s no depth with character development or plot just pure, child-like fun typically wrapped inside a feel-good script meant to entertain. He has been so successful in this approach that it has created an inside joke to others that see his movies for what they are against those that attempt to realize something much deeper and always come up short. This stance isn’t meant to defend his films against analyzing them as art entertainment, however, art is subjective and so are Adam Sandler movies.

Murder Mystery was about Nick (Sandler) and Audrey Spitz (Aniston), a married couple celebrating their 15th wedding anniversary with a trip to Europe. Realizing that he has generally taken the easy way out with their anniversaries, sets out to remedy his missteps by booking a bus tour exploring the magic wonders of curing ham but thanks to Audrey’s chance encounter on their plane, his plan quickly evolves into a getaway on a private yacht with a wealthy family who’s at odds with one another leading to the murder of its patriarch for the sole ownership of the family fortune. As the film’s namesake begins to take shape, both Nick and Audrey begin to investigate each of the suspect’s motives slowly uncovering a winding plot of revenge and greed.

This sounds generic and in many cases it is, but the most worthy thing the film does was its free approach of showcasing the incredible chemistry between Sandler and Aniston often giving way to what felt like improvised lines by Sandler that kept Aniston on her toes and attempting to keep from laughing onscreen. It was noticeable but that was the point because you would see Aniston’s surprise reaction and laughter only to go back “into character” and deliver her next lines at any moment a stray line of dialogue. These small moments made the movie and were things that helped the film be a fun watch when little else did. The supporting cast in Murder Mystery were good, all playing their respective roles and the story was easy enough to follow as well as offered a fun ending.

Murder Mystery is a fun, light-hearted and knows its own limitations which only boosted its appeal because of its easy-going approach to telling its story. If you struggle to try and make Adam Sandler comedies fit into a specified cinematic box, you will be disappointed every single time. But if you just take what you receive at face value and simply enjoy without the worry or complication of character depth or over-analysis, you will come to thoroughly enjoy the easy mental state his films allow you to settle into. Many will find it easy to pile onto Sandler or Aniston for being wasted onscreen or not giving enough effort and as previously mentioned, those are the ones missing the entire point.

If you have nothing to do this week and find yourself needing to fill a pocket of time, Murder Mystery is a fun watch that won’t complete occupy your time and energy. If anything, it is worth a recommendation just for the natural chemistry between the two main actors and how effortlessly funny they each come across during the movie.