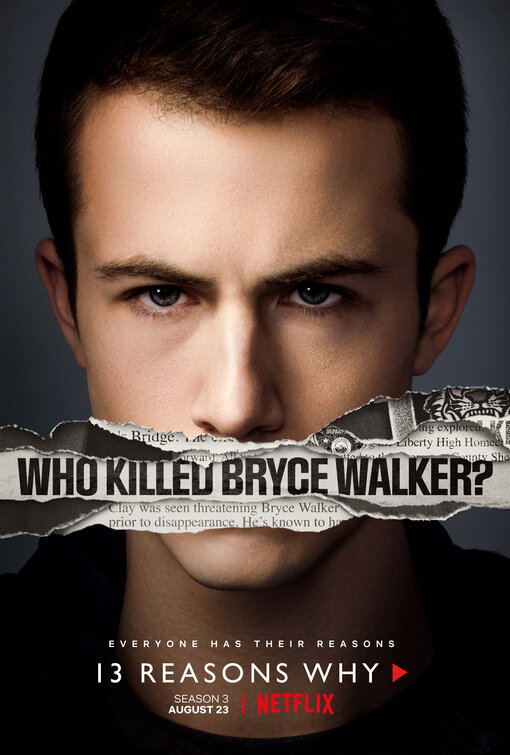 13 Reasons Why Season Three is a series of missed opportunities filled with stiff performances and a confusing narrative as these teens face the harsh realities of the real-world. It is a step backward for this once conversation-starting teen drama.

Netflix’s 13 Reasons Why was a cultural phenomenon when it was released due to its harsh, but realistic look at the struggles of high school both mentally and physically. However, its second season became more of a courtroom drama that focused on the aftermath of Hannah’s death and the ensuing legal battle between her family and that of her rapist. This direction created an uneven, awkward narrative with no sense of delicacy for its serious topics. Could season three right this wrong?

The main story of 13 Reasons Why season three picks up eight months after the events at Spring Fling as the students try to cover up what almost happened while helping Tyler move forward in his recovery. However, after a fateful Homecoming game leads to the disappearance of Bryce Walker, everyone he ever hurt becomes a suspect. With eyes turning to Clay Jensen, he must rely on the help of the new kid at school Ani (Grace Saif) to help steer the investigation to the truth.

Right off the bat, spoiler alert, it did not right this wrong. In fact, 13 Reasons Why managed to somehow get even worse in pretty much every aspect. The acting was stiff and unmemorable, the pacing and style was all over the place making it difficult to invest in or build any sort of tension, but it is within the story itself that this third season truly crashes and burns. It is an intriguing concept to follow the death of Bryce Walker, a known rapist who basically destroyed the lives of every other character on the show, because it gives everyone a motif and thus creates a great whodunnit premise. This paired with the high school setting creates a Riverdale meets How to Get Away with Murder vibe and yet the show manages to neither go campy or serious enough to succeed.

Instead, it safely goes down the middle, avoiding any sort of thought-provoking discussion on its themes. This season glosses over such topics as abuse, rape, murder, immigration, abortion, drug use, PTSD, homophobia and pedophilia among many other grounded, human experiences. While even last season tackled some of these topics in a meaningful way, season three is devoid of any important conversation as they try to avoid depicting anything too graphic for its audience. (It should be noted that the series removed its controversial suicide scene to avoid backlash and believes a simple helpline message after each episode is the solution).

However, the issues of this season stem beyond this lack of a proper conversation. There are a number of questionable plot points that make absolutely no sense in the grand scheme of the show. Monty’s closeted sexuality was glossed over and instead creates a character more despicable than Bryce. Speaking of Bryce, there is a ton wrong with the use of this character in this season. For starters, the entire season is his attempt to redeem himself and start on a new path, but when it is necessary for the plot to revert back to him being an asshole. Considering his involvement in everything from the previous two seasons, it is a little difficult for the audience to identify with Bryce as the showrunners try to humanize him.

And one of the biggest issues in this season of 13 Reasons Why is the introduction of Ani. Somehow this girl, in the span of one school year, infiltrates this group of friends and gets them to all see her as a close companion to confide in. She even convinces them to tell her everything from Hannah’s tapes to Spring Fling AND she somehow makes Bryce into a semi-respectable man. This mixed with her constant voice over narration and ability to somehow be everywhere at once and this character feels more like a means to an end to help push these broken teenagers out of their rut.

What did you think of 13 Reasons Why? Was the third season necessary? Let me know in the comments!