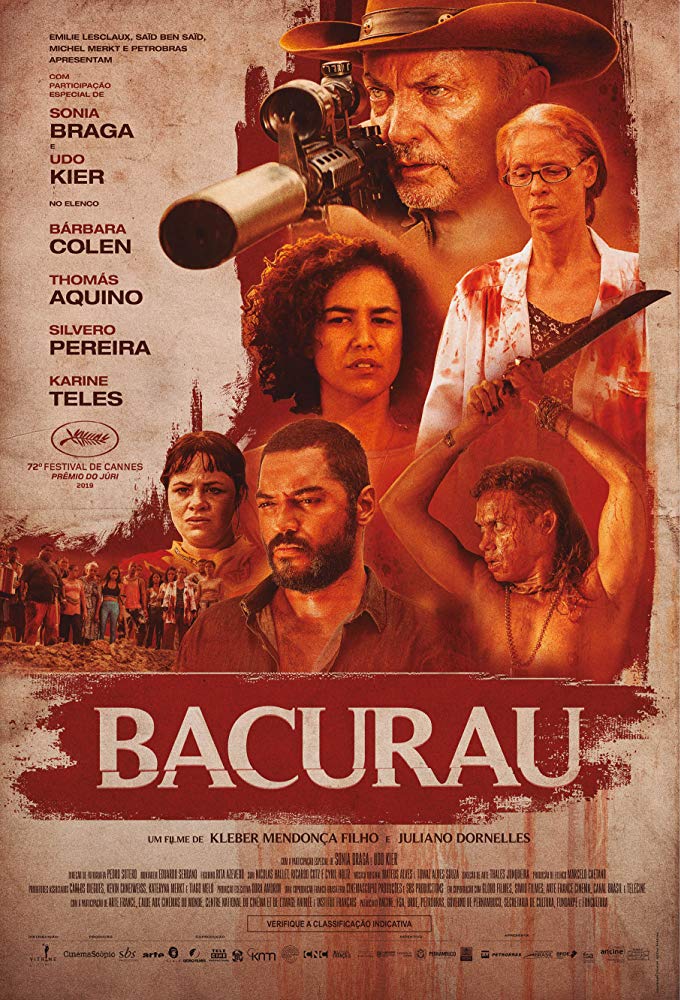 Bacurau is an enthralling Spanish film that handles a heightened reality that was arguably absurd and goofy with grace and expertise.

Something’s going on in Bacurau. No one quite knows what’s up, but little by little things start going wrong. One man spots a drone looking similar to a UFO. The water truck comes into town shot full of bullet holes. Two bikers show up, buy some water and then head out of town. The cell signal is jammed and you can’t find the titular town on Google Maps anymore. All of this happens right after the funeral of Carmelita, the town’s matriarch, who’s procession is shown in a beautiful scene that quickly shapes the tone of the first act. It’s a jaw-dropping portrait of a town with entrancing milieu that builds up to a complete tonal shift, pulled off with expertise and grace. The film is topped off with a thrilling conclusion that helps explain the director’s choice to call Bacurau a western.

Filho and Dornelles create an entertaining and confident journey, starting with the minuscule but vibrant community of Bacurau. The film opens with the return of Teresa (Colen), the daughter of the town’s teacher and the granddaughter of the recently deceased. As she settles back in, we’re introduced to the group of townspeople that elevate the film from enjoyable to excellent. From the Spanish guitarist who mocks two misguided tourists, to a harsh doctor with an alcohol problem, every character is someone you’d want to sit down and exchange stories with.

Meanwhile, Bacurau‘s set design gives the town has a strong sense of heightened reality, as if anything absurd could happen here and it would seem normal. Luckily, the film doesn’t stop at just a town portrait. Swapping with the cue of an old Carpenter track, the tone flips towards the strange with each minute that passes. Something’s wrong, and problems have started to raise some eyebrows, but as soon as the film shifts, it doesn’t hold anything back.

Luckily, Bacurau‘s script bends in such a way that helps your disbelief. Each scene feels goofier than the last, and somehow more enthralling. By the time Michael (Kier) and the town’s doctor meet over a bowl of stew and the film touches on neo-nazism and the American obsession with guns, you’re completely either in or out. But the real joys are still contained in the townspeople during little moments – the children who watch an airplane fly over the town, the sexual tension between Teresa and Pacote (Aquino), the communities’ positive view of sex work, a mayor candidate who the town unanimously hates.

Each scene brims with humor and joy in a town where everyone seemingly loves and respects each other. By the time Bacurau wraps up with its violent and gonzo climax, you’re glad the people can get back to the previous existence they had, even if nothing will be the same again.

The Terror: Infamy (2x05) Shatter Like a Pearl Review