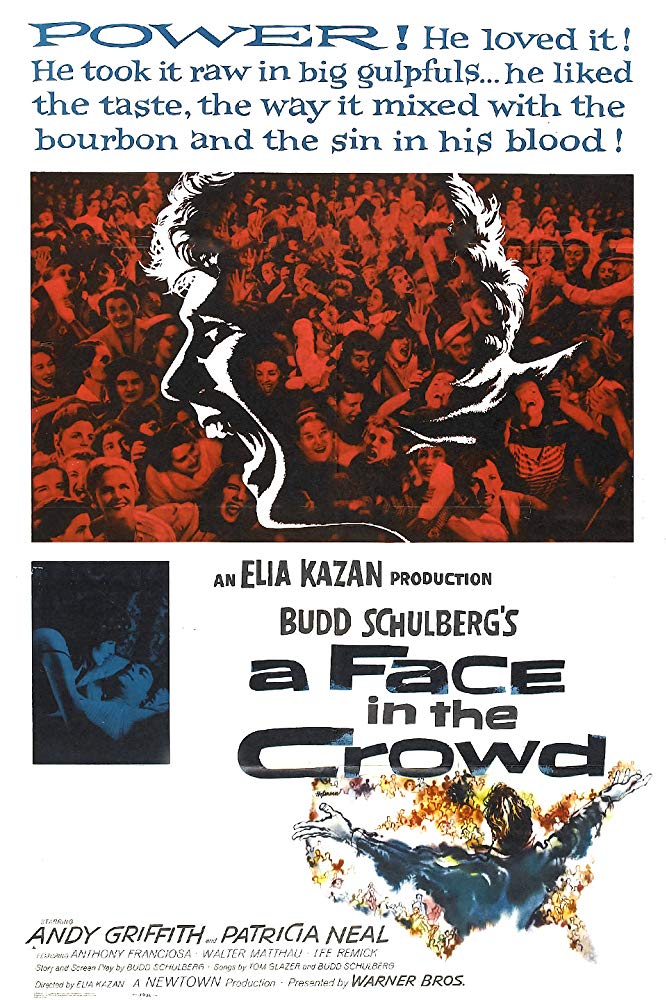 A Face in the Crowd was a film ahead of its time, serving as a timeless portrait of the negative power of populism.

A Face in the Crowd follows Larry Rhodes (Griffith), a nobody locked in an Arkansas jail who’s picked up by an ambitious radio producer called Marcia (Neal) to be part of a radio show she’s producing. She was just looking for something new and refreshing but soon after Rhodes’ popularity starts to rise. She renames him “Lonesome Rhodes” and his natural charisma and earnest persona charms the audience. When he goes to work in television, his popularity skyrockets to unimaginable heights and Rhodes’ true nature finally shows up – arrogant, with no morals what-so-ever and a thirst for power that is insatiable, Rhodes is pleased beyond belief to manipulate the public and even those around him, including Marcia.

On occasion, there are films that sneak up on you. You’re not sure what to expect when you start watching and you don’t know a lot about it. And in the end you are completely mesmerized by the experience. A Face in the Crowd is one of these films. Only knowing that it was directed by Elia Kazan, at the time in the heights of his abilities and coming from the McCarthyism scandal that deeply hurt his career and that the film had a powerhouse performance by Andy Griffith, this was quite a ride…

With A Face in the Crowd, Kazan tackles with ease the elusive power of television and how it can be used to manipulate and entice its audience. Television has a very furtive power to it; it sneaks into our homes, whispering swiftly in our ears without us noticing. It’s totally hypnotic and it’s always there, always turned on and feeding us information. In time, we stop paying attention and we take whatever it’s giving us without much thought or consideration. In such cases, greedy, sneaky men can find a green field to seed their own desires. If they present themselves as honorable, trustworthy and truthful, they can get away with anything.

No, A Face in the Crowd was not produced this year. It’s over 60-years old, which is quite a feat. At the time, television was still in its early ages and the film tackles issues that still feel very fresh today. The aspects it’s debating, and depicting are all around us. Only now, besides television, the Internet is also available, and it might be an even more prosperous field.

Kazan manages to give us a closer look at the destructive power such an individual hold in his hands, and how uncompromising he is in using it to his own advantages. Rhodes is an awful man, yes. But he’s also very charismatic, and he knows exactly what to say and when and how to do it. In a way, he’s a magician, keeping our focus in one hand while the other is doing unimaginable things. When the powers that be understand his earnest everyday man character holds the audience hostage, they do the only thing men in power usually do: they want more. And they invest. Advertisement pour money into his show, giving him more and more power to hypnotize his audience. In a very short time he’s venturing into politics, the perfect area for such a wizard with so much disdain for others.

One of the greater aspects of A Face in the Crowd‘s script is the way it works the characters around Rhodes to give us a more complex understanding on how such a man came to be. Of course there are people who honestly follow and believe his character, and they are a big part of the surroundings; but there are others, those who truly see who he is, and they are fascinating to follow around. Some of them honestly don’t care and want in for the ride; others, like Mel Miller (Walter Matthau), trace a collision path with him; some, like the people on the crew, are just too afraid to do something; and there are those who are lured in and destroyed like Betty (Lee Remick) without Rhodes even thinking twice.

Griffith’s work in A Face in the Crowd is a true tour-de-force performance as Larry and as Lonesome Rhodes. The way he creates his “honest” Lonesome, and the way he goes so low with Larry, always showing his teeth while smiling as he was able to chop someone’s head off, is quite disturbing. But there’s another standout in the cast, and that is Neal. Marcia is such a complex well written character. She created Lonesome Rhodes, he’s her Frankenstein monster, one that she cannot control for much longer. She sees who he is, and she’s totally disgusted by him. But she’s also drawn in by his charisma and she has a very destructive guilty feeling inside her that prevents her to fight back. In a way she believes she deserves to be destroyed by him since she the reason the found his way into America’s homes. Her downfall is fascinating to watch, especially because Neal is such a wonderful actress to watch.

(Spoiler alert) If there’s anything that gives away A Face in the Crowd’s age is its ending; in a way, it’s beautiful simple and touching to see that it was only needed form Larry to show his true colors to the audience to be completely rejected and eventually destroyed, and we know, by experience, that things are not as simple as that anymore. People are displaying their awful sides from the get-go and people are looking away.

At the end of the day, A Face in the Crowd is a fantastic film, one that needs to be seen and discussed.