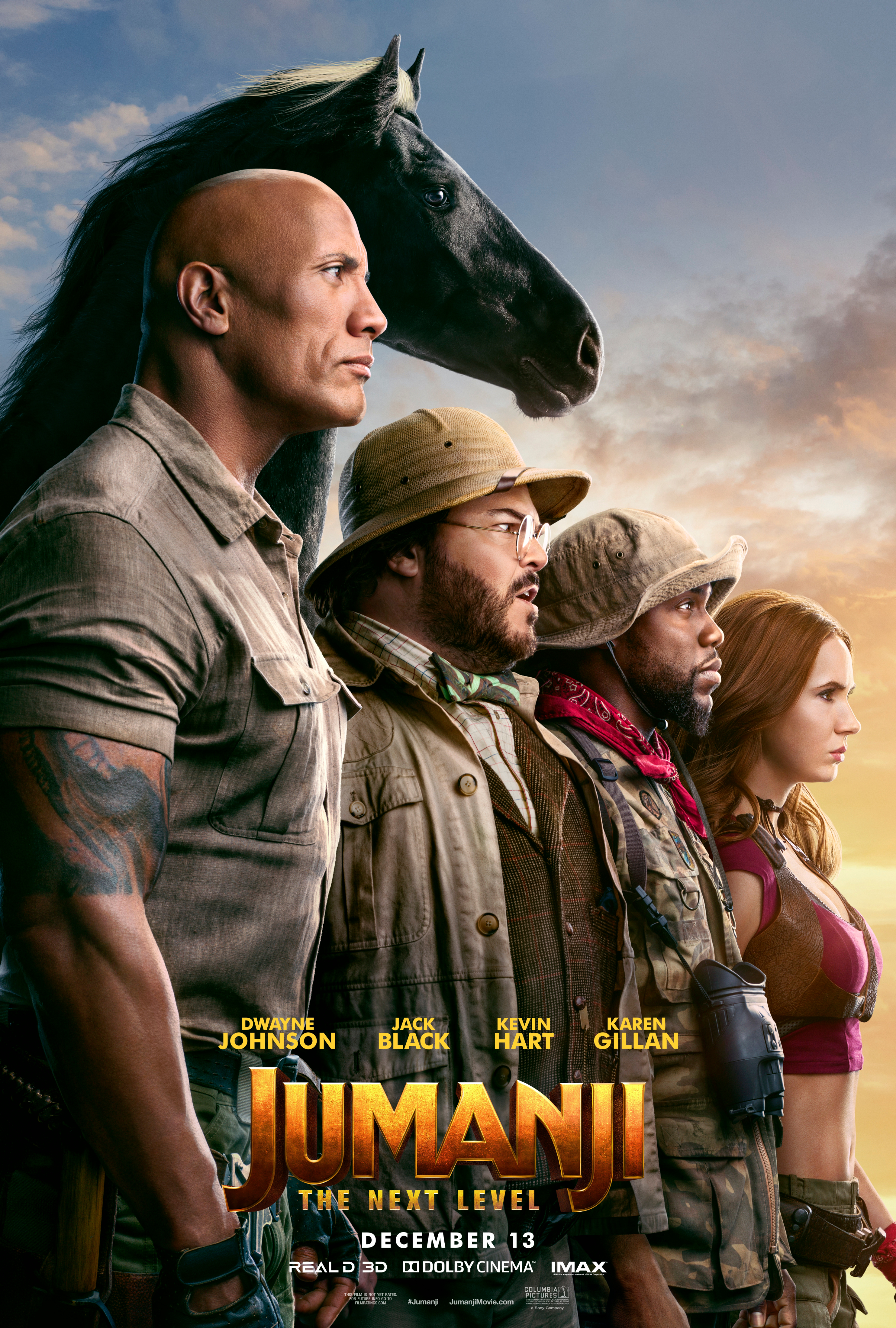 Jumanji: The Next Level builds on the original with more personality and heart, serving as one of the better studio franchises out there.

One of the biggest surprises of 2017 was Jumanji: Welcome to the Jungle, which situated the classic game in the context of our modern society, and framed the public’s fascination for nostalgic video games in an entertaining way. The inevitable sequel, Jumanji: The Next Level adds more or less the same…but this time with Dwayne Johnson playing Danny Devito!!

Like the first film, Jumanji: The Next Level starts off flat. Spencer (Alex Wolff), Fridge (Ser’Darius Blain), Bethany (Madison Iseman), and Martha (Morgan Turner) are all in college now, separated from each other due to the burden of starting the first chapter of your life post high-school. Spencer is insecure about his life after leaving the game (I mean who wouldn’t be if you couldn’t be Dwayne Johnson anymore) and when he comes back home instead of reuniting with his friends, he decides to brave the game one more time. One of the biggest questions going into this one was whether or not the script could find a clever way to get the players back in the game, so it was disappointing to find the introduction play out similar to the first film. But when the gang resumes their avatars – with Spencer’s grandpa Eddie (Devito) and his “friend” Milo (Glover) accidentally virtually teleporting into the game – the fun begins again.

Part of why Welcome to the Jungle worked so well was the abundance of laughs produced by Johnson playing a scared teenage-boy and Black playing a whiny spoiled teenage-girl. Jumanji: The Next Level flips this on its head by having the characters switch avatars at the start. Going in, it would be easy to think Johnson channeling Devito would provide the most laughs, but this time Kevin Hart, known for his zany, erratic speech pattern, absolutely steals the film playing the reserved, slow-talking Milo.

Jumanji: The Next Level was at its best when all the characters interact together, but when they’re separated or talking one-on-one, the film’s pacing and momentum begin to halt. At first it was funny to see Eddie and Milo confused about the entire situation, but when they keep repeating “wait, we’re in a video game?” for half the film, the humor dies quickly. There is also a subplot of tension brewing between Eddie and Milo that appeared to have potential, but these scenes were the weakest part of the story and slowed the film down. The theme of “growing old isn’t that bad” driving the subplot wasn’t fleshed out enough to construct any emotional response.

Like a video game, Jumanji: The Next Level whips around from mission to mission with our characters facing difficulties throughout each level. The first level provided the most character growth and storytelling structure, as Johnson and company have to escape a horde of ostriches in the desert Mad Max: Fury Road style. From there the levels get less and less intense, but as new and familiar characters begin to pop-up throughout the film, the characters and laughs keep the story moving.

Jumanji: The Next Level is pretty much on the same level as the previous film. Both serve as refreshing takes on the original film, bolstered by a hilarious cast playing against type. Despite concerns whether or not this film would be able to churn out originality and not ride on the coattails of the first film, The Next Level manages to do both, and that is completely alright going forward if the franchise remains as entertaining as it is right now.

The Body Remembers When the World Broke Open Review