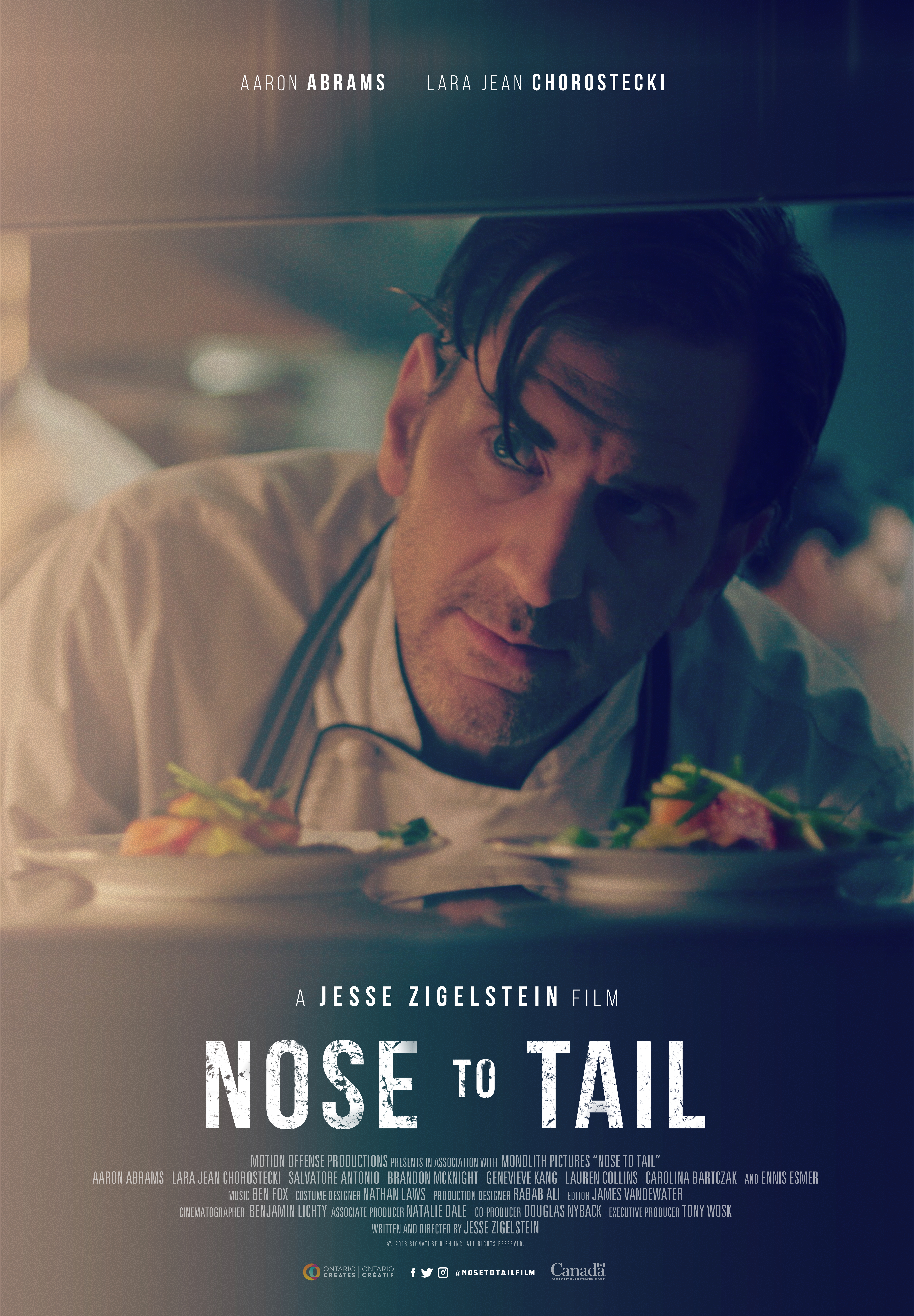 Nose to Tail is a delicately crafted and tasteful indie dramedy that starts as a culinary tale, but finds itself focusing more on the broken man behind the coat. Between the sharp writing, meticulous pacing and tormented performances, this film goes all in like its title suggests and proves to be more than just the average cooking film.

Nose to Tail follows the story of Daniel (Aaron Abrams), a talented, but abrasive chef who struggles to juggle his own personal demons and the pressures of running a high-end restaurant. Within the span of 24 hours, Daniel’s world turns upside-down as he faces obstacle after obstacle in both personal and professional tribulations as he tries to desperately save the business he has given up everything in his life for.

With Nose to Tail, first-time director and writer Jesse Zigelstein creates a flavorful and packed powder keg of a day in the life of a problematic and overzealous chef. In the course of one day, Chef Daniel must save the fate of his business. This means dealing with overdue rent to his landlord, the loss of his sous-chef, the return of his ex-wife and child, the complication of sleeping with his manager and a prevalent drinking and painkiller problem. All of these problems are just obstacles that lead to the end of his day in which this chef needs to impress a huge potential investor that will hopefully remove all the other stresses plaguing his life.

Nose to Tail plays on the chef-movie formula where a stressed out culinary master faces a failing business and everything depends on one final night. In this film, it is in the form of an investor, but the result isn’t the typical fairytale film ending. Instead, it tackles the character beyond the coat as the film instead dives deeper into the psyche and mental health of its protagonist and his descent.

Chef Daniel is at the very least an asshole and egotistical maniac who will use everyone around him in order to help himself get forward in life. The only thing that matters to him is his own self-interest and this not only propels his madness forward, but sets in motion his eventual implosion. This is more than a cooking movie, it’s a character study following one of the world’s most stressful professions.

This is conveyed beautifully through a number of the film’s aspects. Firstly, the direction by Zigelstein is sharp and sets the right tone and atmosphere for its narrative. The script is the stronger of Zigelstein’s contributions as it is exceptionally smart, filled with great dialog and confrontations between a broken man and those pushing away from him. This character only works thanks to the phenomenal performance by Aaron Abrams who brings the right type of charisma to this chef. From his emotional moments to the quick fire quips, it is hard not to invest in the complexity of this character and his naive perception of the world around him.

Nose to Tail‘s final two highlights are its setting and score. The small bistro on College Street is a great setting to place these characters in. The minimalist design, the high-end atmosphere. It all helps to create the right level of tension and stake for the story. Meanwhile, the sleak, groovy bassline in the jazzy score brings a somewhat melancholic character to the background of the film that sets the pace and atmosphere for this tasteful culinary tale.

The Photograph - An Engaging Though Undeveloped Romance