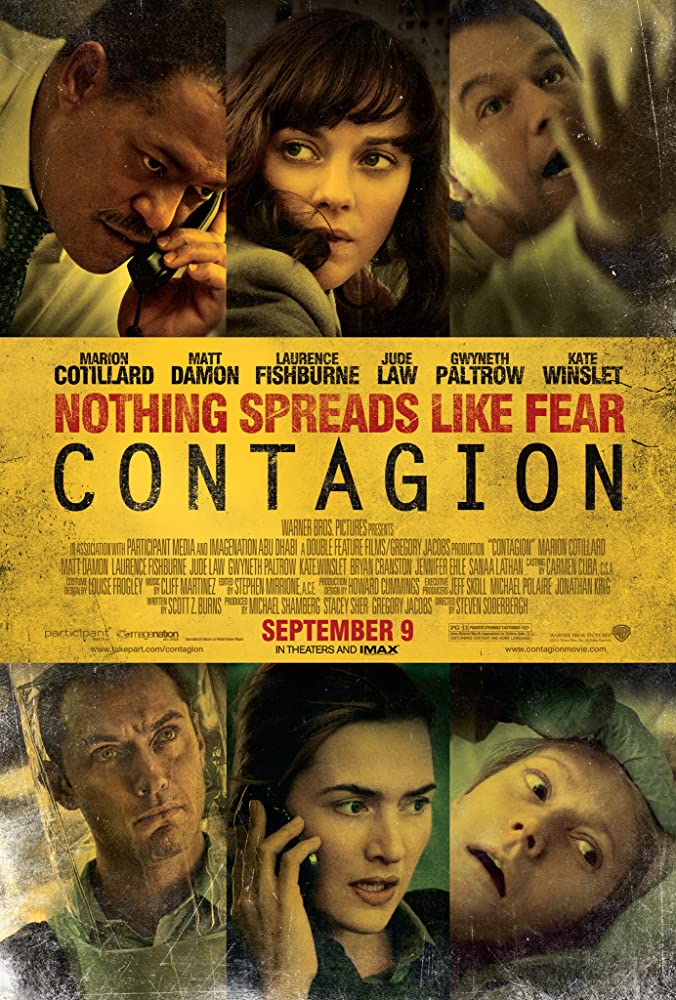 Contagion is classic action-thriller about society dealing with tragedy before finally rising from the ashes.

The hottest film around now is not on the theaters; it’s not even a new release. It’s a film from almost ten years ago that no one really paid attention to when it came out but found instant success years after because it seems to have predicted what would eventually come to happen to the world. Contagion is an ensemble pic about a pandemic that spawned from a respiratory virus originated in China that quickly spread around the world, one that tries casting a wider look at what would happen if that scenario eventually came to happen.

Contagion starts very simple: an executive named Beth Emhoff (Paltrow) is at a conference in Hong Kong. She goes to a casino, shakes a few hands, eats and drinks at the bar and then goes back home to Minneapolis. She feels sick but she is certain she is jet-lagged; very quickly she crashes and dies before the doctors can even begin to understand what was happening to her. Her husband Mitch (Damon) is devastated, but that is not even the end of it: when he returns home, his stepson also passed away the same way his wife did. Mitch gets tested but is immune.

Simultaneously, the people who crossed paths with her in Hong Kong and at the layover in Chicago also gets sick and all die quickly. The World Health Organization soon begins to track the disease, trying to find answers to unknown questions. They send a specialist, Dr. Leonora Orantes (Marion Cotillard), to China to find patient zero. In the U.S. the CDC head, Dr. Ellis Cheever (Lawrence Fishburne), starts investigating the development of the disease by sending a researcher, Dr. Erin Mears (Winslet), to the field and asking for scientists to find the cure. But the virus is still mutation and adapting to our system, and the cure might take time. Meanwhile, a conspiracy theory journalist named Alan Krumwiede (Law) begins spreading terror around the country.

Contagion follows more than a dozen characters from all around the country and the world, but it’s a tribute to the storytelling and the director that we never lose track on their stories. The script structures the changes very smoothly, making each segment a complement of the previous ones, creating a quilt of stories that form the big picture of a pandemic disease. Most importantly, Burns never loses his touch to the human side of it: this isn’t an action flick at all, it was never the intention to do so. Instead of going nuts like Outbreak did in the 90’s, putting the Army to fight with bazookas and tanks like it was an alien zombie virus instead of a realistic virus the script wants us to believe it is, The film never diverts from reality. What we see is real people facing death, fear, hunger and violence. What would happen to us if we faced the unknown?

The strong sense of realism imbued in the film is the reason for our unsettlement while watching it. At the time, this felt like a real possibility in the future. It’s grounded in reality because it gives us. All angels. The everyday man Mitch doesn’t know what to do. He sees people totally desperate around him, violence, raids and death soon come; The W.H.O. specialist shows us how the poor are really going to be treated in this scenario, and how even in the face of total human annihilation politics are still very much involved; the CDC head also gives us the other side of politics and his concern in keeping society functional; the journalist creates chaos and the scientists are running out of time before nothing else lasts.

Contagion is a gripping scenario to behold, especially because we are seeing it happening right now. The only thing that the movie didn’t get right is that hope and generosity are still a very big part of it all. But maybe we all never expected those to happen either, which is a very optimistic reality we are currently seeing in the world; people helping each other out, singing in balconies, offering help to elderly and spreading good vibes. Meanwhile, The entire cast makes this story work beautifully. Paltrow’s death scene is quite harrowing and Soderbergh killing a major star five minutes after the movie started tells us no one is safe here. Technically, it’s everything we came to expect from the director.

In the end, Contagion might not be the type of film you want to watch right now. But if you give it a try, you will not regret it.